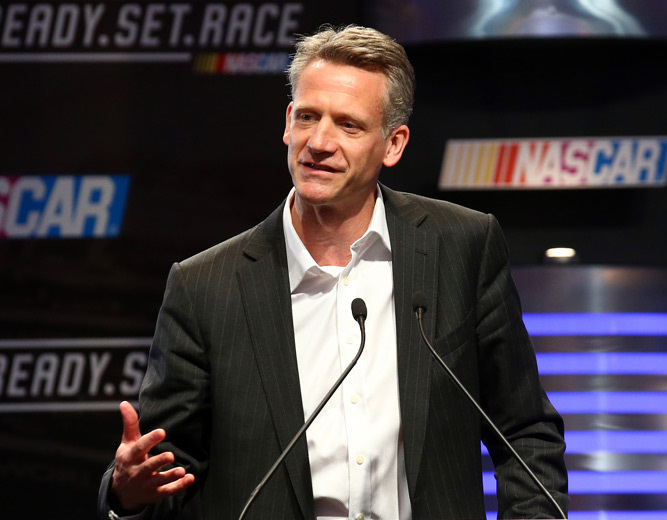 NASCAR change — big change — is on the near horizon.

Asked if NASCAR is in a flux or transition, NASCAR President Steve Phelps didn’t hesitate with an answer to Godwin Kelly of the Daytona Beach News-Journal.

“We’re in a transition and I’m excited about the transition we’re in," he said during a lengthy telephone interview Thursday. “I think the industry — broadly — understands what we are trying to do, which is put on the best and most compelling racing we can and grow this sport."

Phelps confirmed NASCAR has moved out the concept-and-discussions phase and into actively putting a new business model in place.

NASCAR will move away from the one titled sponsor approach (Winston, Nextel/Sprint, Monster Energy) for its marquee Cup Series to a variety of sponsors pouring money into the entire system — NASCAR, TV partners, member tracks and race teams.

“We’re going to a new sponsorship model," Phelps said. “It’s really more to make the sponsorship buy as easy as possible. As an industry, we are fairly fragmented. You have the sanctioning body, different tracks, race teams, drivers and broadcast partners; all these different groups you can contract with as a sponsor.

“We are trying to bring all of them under one umbrella. If you go to, for example, a company such as Coca-Cola, you can sell them a one-stop shop. It’s an ease in doing business. If you do that, it’s going to foster more sponsor activity."

“We are out in the marketplace right now selling these tiered sponsorships for 2020," Phelps said. “We won’t get everybody signed on for 2020, but this will be the start."

While he can’t discuss the whereabouts of Brian France, who stepped down as chairman/CEO after a DUI arrest in New York this summer, or NASCAR’s bid to outright buy sister company International Speedway Corp., he is willing and able to address almost any other topic.

Since Brian France’s status and takeover bid are sure to spill into the 2019 stock-car season, Phelps was asked about those clouds over the sport and any impacts they may have for motorsports.

“I don’t think it’s a cloud," he said. “The opportunity to privatize ISC is being done for all the right reasons. I can’t get into any of the specifics. I do think the beneficiary at the end of the day is going to be the fans.

“That may seem to be a strange statement, but it is a true one. We need to put on the best race-day experience and I believe making some of the changes being contemplated will help us do that."

Phelps is juggling several things at the same time.

For instance, NASCAR is going to a new competition package for tracks longer than 1.5 miles in length, excluding Daytona and Talladega, which will knock the horsepower of these mighty V-8 engines from 750 horsepower down to 550.

“The package is loosely based on the package we used at this year’s All-Star Race," he said. “Our research, from a fan’s satisfaction standpoint, was the single-highest race we had all year.

“It was great to watch. Will every race next year be as good as the All-Star Race? Probably not. With that said, we saw some great racing in 2018 in all three (national) series."

By modifying the All-Star package, NASCAR’s competition department thinks they have “found the sweet spot" which will promote “more side-by-side racing" in 2019.

“That’s what our fans want," Phelps said. “We want to give them more of what they want. This isn’t pack racing. The only place we will see pack racing is Daytona and Talladega."

“You won’t see a guy jump out to a 7- or 8-second lead after the first few laps," he added. “This package will keep people more in close contact. We think it will be compelling for fans."

After shooting up the corporate ladder, Phelps said he feels comfortable as NASCAR’s out-front executive.

“The fact that Jim and Lesa (France Kennedy, NASCAR vice-chair) put me in this position is incredibly humbling," he said. “I love it. I’m a lifetime NASCAR fan. I went to my first race when I was 5 years old.

“It’s a sport I love. If there’s something I can do in the seat I’m in that helps this sport get better and grow, that’s something I will clearly want to do