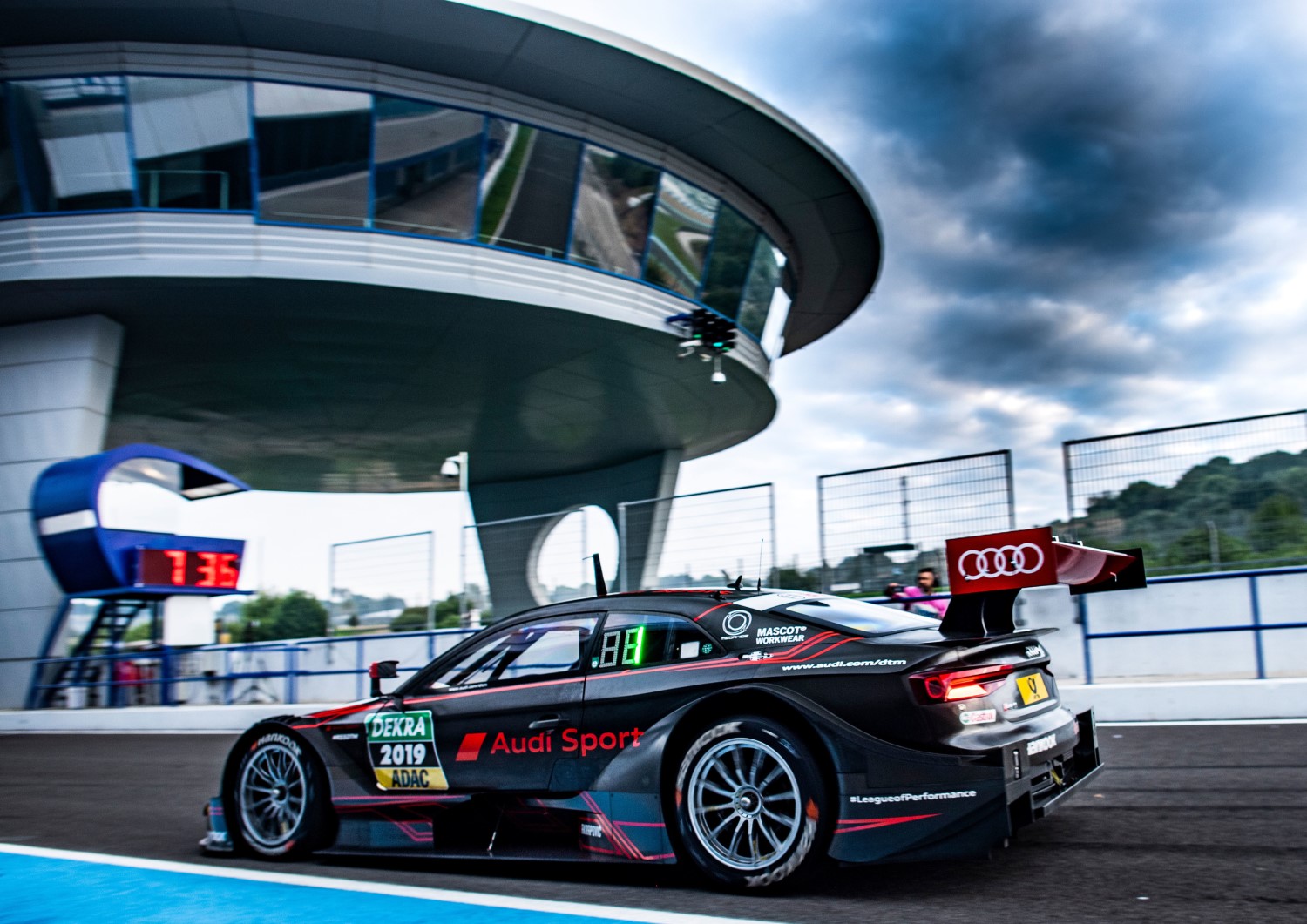 At the end of the 2018 DTM year, Audi Sport offered seven drivers the opportunity to gather new racing experience: during the joint test of Audi, BMW and Mercedes-Benz at Jerez the race drivers were obviously thrilled once again by the 2018 version of the Audi RS 5 DTM that bade its farewell.

For Audi Sport, the tests at Jerez, Spain, marked a successful ending of the 2018 DTM year. Six drivers in total from six different nations had the opportunity to test this season’s Audi RS 5 DTM for the first time. From Monday to Wednesday Jonathan Aberdein (20/South Africa), Andreas Bakkerud (27/Norway), Mattia Drudi (20/Italy), Sacha Fenestraz (19/France), Sergey Sirotkin (23/Russia), Benoit Treluyer (42/France) and Frederic Vervisch (32/Belgium) shared time in the cockpit of a total of two RS 5 DTM cars. For the test, Audi Sport Team Rosberg’s DTM squad and Audi DTM customer team WRT each fielded one of Audi’s DTM touring cars with V8 naturally aspirated engines. Jamie Green provided the race drivers with valuable pointers. The Briton was active as a reference driver for Audi Sport and rang in the tests on Monday.

At the same time, Mike Rockenfeller and Nico MÃ¼ller continued the work for the 2019 season with a test version of the new Audi RS 5 DTM at Jerez. Rockenfeller performed the test work in the DTM car with the new two-liter four-cylinder turbo engine delivering some 600 horsepower on Monday and Tuesday. The former DTM Champion reeled off 211 laps in total on the 4.428-kilometer MotoGP circuit. On Wednesday, Swiss Audi DTM driver Nico MÃ¼ller took over the cockpit and with 118 laps driven covered a remarkable one-day distance as well.

“This was another very good test for Audi Sport here at Jerez," said Project Leader Andreas Roos. “All seven drivers did a very good job in our Audi RS 5 DTM. I was particularly pleased to see how excited they obviously were. Even someone like Sergey (Sirotkin) with Formula One experience under his belt had a grin on his face afterwards. With our test vehicle we were able to check off a lot of items on our test program list. We drove a total of 1,457 kilometers on these three days, and largely did so without any issues. Now we’re going to use the rather long winter break to analyze the data before we’ll return to Jerez in March for the next official pre-season DTM test."

Jonathan Aberdein (220 laps driven)
“Driving the Audi RS 5 DTM on a race track was an elating experience. I’m simply thankful for the opportunity to test the car here at Jerez. The days really flew by. I was amazed about how much performance the car delivers considering its size. I’ve only driven single-seaters before that don’t have a roof and definitely not such a large cockpit, so the view of the track was a little unusual at first."

Andreas Bakkerud (59 laps)
“For me as a rallycross driver, a completely new chapter. Last week I was able to prepare a little for the test in the simulator at Team Rosberg. Obviously, then driving the RS 5 DTM here on the race track was even quite a bit more impressive. It was hard to believe how late you can brake with the DTM cars. Jamie (Green) and Rene (Rast) gave me some valuable pointers in this respect. Thank you to (Head of Audi Motorsport) Dieter Gass, Audi Sport and the entire test team for this really cool experience."

Mattia Drudi (50 laps)
“The DTM, for me, is the highest level in touring car racing. The opportunity to test the Audi RS 5 DTM has been the most important moment in my career so far. To be honest, I was initially a little intimidated by the size of the team but then was soon very excited about working in such a professional environment. I wasn’t able to stop grinning on the first three, four laps. This awesome power when you step on the gas pedal, plus the cornering speeds – a very special experience."

Sacha Fenestraz (57 laps)
“I hadn’t expected the DTM race cars to be so incredibly fast. My stints went really well, except for the slip shortly before the end of the test when I got off track and hit the barrier. Nothing happened to me but of course it bothered me that the car was damaged in the incident. Even so, it was a unique experience for me."

Sergey Sirotkin (91 laps)
“I watched the DTM even as a child, so I was incredibly excited about the test. Being able to sit in an RS 5 DTM was a unique experience, but also pretty tricky. I hadn’t found the perfect feel for the car by the end of my stint. I’ve never driven a race car before that comes close to the RS 5 DTM – the closest I may have come to it was in Formula 3. The engineers and the mechanics supported me as best they could and shortened the time for me to familiarize myself as much as possible – many thanks once more to everyone."

Benoit Treluyer (70 laps)
“The test here at Jerez reminded me of my days in the Super GT and also of the LMP prototypes: lots of downforce and high speed in the turns. I’ve driven the RS 5 DTM once before for taxi rides, but that doesn’t compare with this on any level. Fine-tuning the setup and improving my driving style lap by lap was incredible fun again. Although I wouldn’t have expected anything else based on past experience: thanks again to Audi Sport and Team Rosberg for the perfect organization."

Frederic Vervisch (47 laps)
“It was a long-awaited premiere for me; I’ve always wanted to drive a DTM car. Other drivers had told me before that the touring cars generate a lot of downforce – I can now confirm that. For me personally, that was the biggest change compared to a GT3 sports car or a TCR front-wheel-drive car. Chasing through the turns in the RS 5 DTM is really exciting. However, directly finding the limit wasn’t easy because you hardly notice the downforce in steering performance."