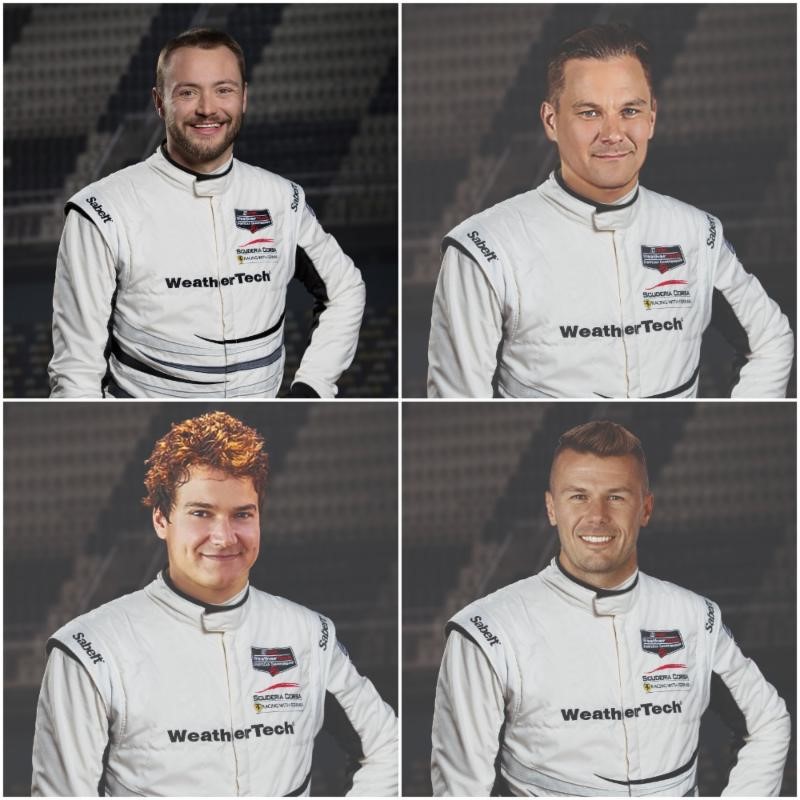 Cooper MacNeil (Hinsdale, Ill.) and Toni Vilander (Finland) will partner in the No. 63 WeatherTech Racing Ferrari 488 GT3 for the 2019 IMSA WeatherTech SportsCar Championship.

Ferrari veteran Vilander brings a wealth of Prancing Horse experience to the WeatherTech Racing team. The Finn spent the last ten years driving with Italian powerhouse AF Corse with wins at Le Mans and Bathurst to his credit. MacNeil, 2012 and 2013 ALMS GTC driver champion with past wins at Sebring and a podium finish at Le Mans, along with the Scuderia Corsa team are coming off of a season ending victory at Petit Le Mans. The team is looking to carry that momentum from October right into Daytona for the Rolex 24 Hours in January.

Joining the season long duo for the Rolex 24 in the white and black Ferrari will be Dominik Farnbacher (Germany) and Jeff Westphal (San Mateo, Calif.). Farnbacher is a seasoned sports car pro with two wins at the Rolex 24 and at the Nurburgring on his resume as well as two runner-up finishes at Le Mans. Westphal also has a strong closed wheel resume having won the pole position in his class at the NÃ¼rburgring and most recently in a Ferrari at the California eight-hour race at WeatherTech Raceway Laguna Seca.

"It was a short off-season for me," MacNeil said. "We just finished up the Ferrari Challenge season in Italy where I won the championship and now, we are off to Daytona to prepare for the 24. It is great to have Toni in the WeatherTech car for the season. He is a great asset in regard to set-up and, of course, speed behind the wheel. Dominik and Jeff will be great to have for the Rolex 24 and our goal is win it. There will be a lot of good cars with great drivers. We've come close in the past, but I really like our chances this year."

"I have run the Rolex 24 hours ten times," Vilander said. It has been a tough race for me as far finishes go. In those ten starts I only have one podium, a third place in the GTLM class. It is nice to join the WeatherTech Racing team. I have driven with Scuderia Corsa before, so I am familiar with the team. The competition in the GTD class is very strong. There are a lot of good teams and driver line-ups. I am looking forward to having good preparation and a strong race next month."

"This will be my 14th Rolex 24 hours race," Farnbacher said. "I have won the race twice in 2005 and 2015 both in the GT/GTD class. I am really looking forward joining the WeatherTech team. Cooper and his dad are long-time competitors in this series. They bring a huge amount of experience to the table. And the driver line-up looks very strong, as well as the Scuderia Corsa prepared Ferrari. The car is very comfortable to drive and has big potential to be a top contender for the win. My goal is to give my best for the team and trying to get us to the top spot for the race."

"I have three starts at Daytona with laps led, quickest laps on track given conditions but have yet to find that maiden win," Westphal said. "Unfortunately, all competitive efforts had my car leading or in the top five until issues put the car in the garage. I have some unfinished business in Florida. I am extremely excited to join the WeatherTech team for the twice-around-the-clock event. The Daytona 24 is our Super Bowl, and we kick the season off with the biggest and most important race of the season. A company like WeatherTech has that presence and professionalism that are synonymous with the brand, so it's an honor to be one of the drivers to fly the flag for the company, Ferrari and Scuderia Corsa. The competition in GTD draws the best of the best from around the world."