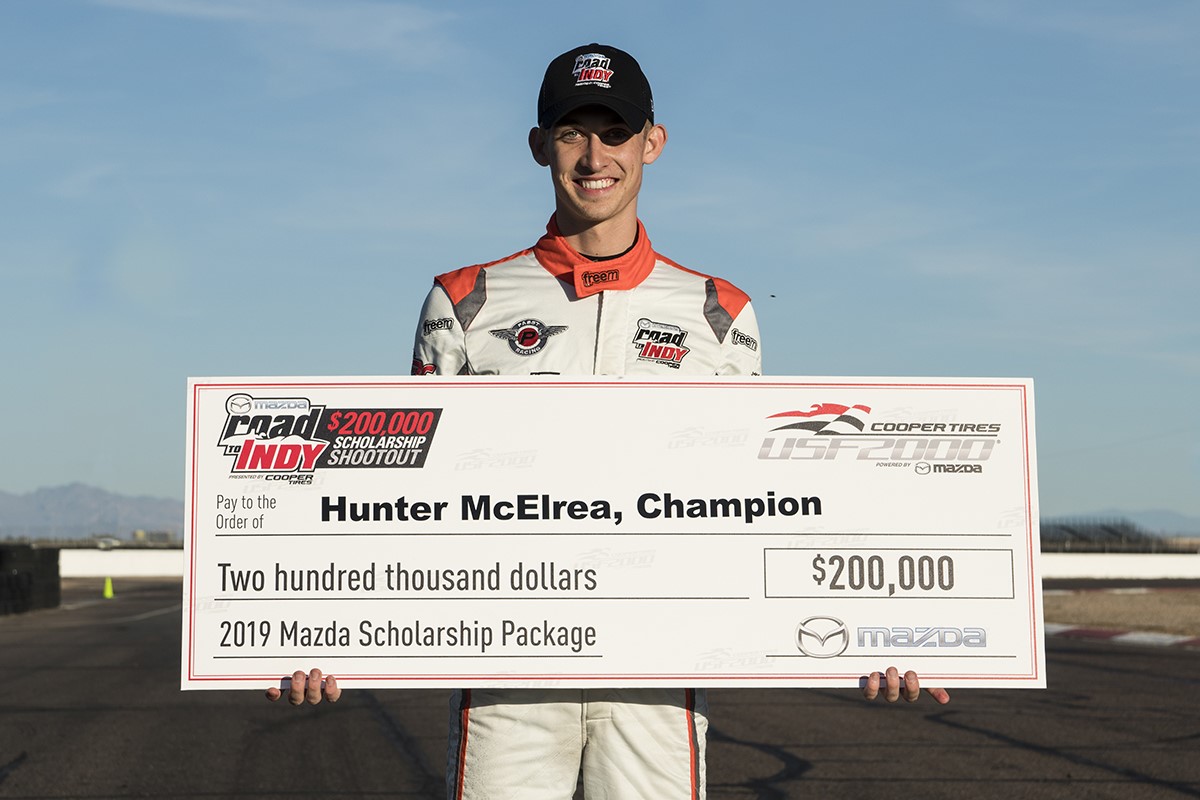 McElrea, 19, who recently clinched the Australian Formula Ford Championship with 13 wins from the 21-race season, will move back to the United States next year to contest the Cooper Tires USF2000 Championship, the first rung on the highly acclaimed Road to Indy Presented by Cooper Tires which in 2019 will offer over $2 million in scholarships to progress from the grassroots of the sport to the IndyCar Series and the Indianapolis 500.

“I can’t believe it," said McElrea. “This is definitely the most exciting opportunity that I have had in my racing career. I cannot thank Mazda and everyone enough for making this possible for me. The fact that I am going to be on the grid next year thanks to them is a dream come true. They have given me the opportunity to prove myself in such a high level that I never even thought I would be able to reach. I have to thank Andersen Promotions, Cooper Tires, all of the judges, everyone from Mazda, the Bondurant Racing School and the other competitors, who literally pushed me to the limit. I am just so happy. It is still sinking in but I just can’t wait to get next year started, and I’ll be representing Mazda in that nice Soul Red USF2000 car."

Nineteen drivers chosen from a variety of Official Feeder Series from around the world were put through their paces during an intense two-day Shootout which included continual off-track assessment and four on-track sessions aboard the Bondurant School Formula Mazda cars on Cooper tires at the Wild Horse Pass MotorSports Park road course.

“Today was an incredible day," said Long. “There was so much talent here for the Shootout. Hunter McElrea just rose to the top when it was time to shine, but our decision was very, very difficult. In the end, given all of the circumstances, we were able to make a pretty good decision and we are really, really proud of not only Hunter but our whole team here with Mazda to be able to grant this $200K scholarship for his opportunity in USF2000 next year."

“Running these shootouts is a very important part of who Mazda is, supporting young drivers," added John Doonan, Director, Mazda Motorsports. “It is very important for who the brand is and we have done it for many years. Even in the future when our relationship with the Mazda Road to Indy is going to be modified, we are still going to support young drivers. For today, we are very happy and proud of Hunter and all of the drivers. Nineteen drivers started the shootout and every one of them represented themselves, their families and their teams extremely well. We are very happy to see Hunter on the grid in USF2000 next year and we wish him well as we do all of the other drivers."

The full list of Official Feeder Series for 2019 and details on the fourth annual $200,000 Shootout will be confirmed in the coming weeks.