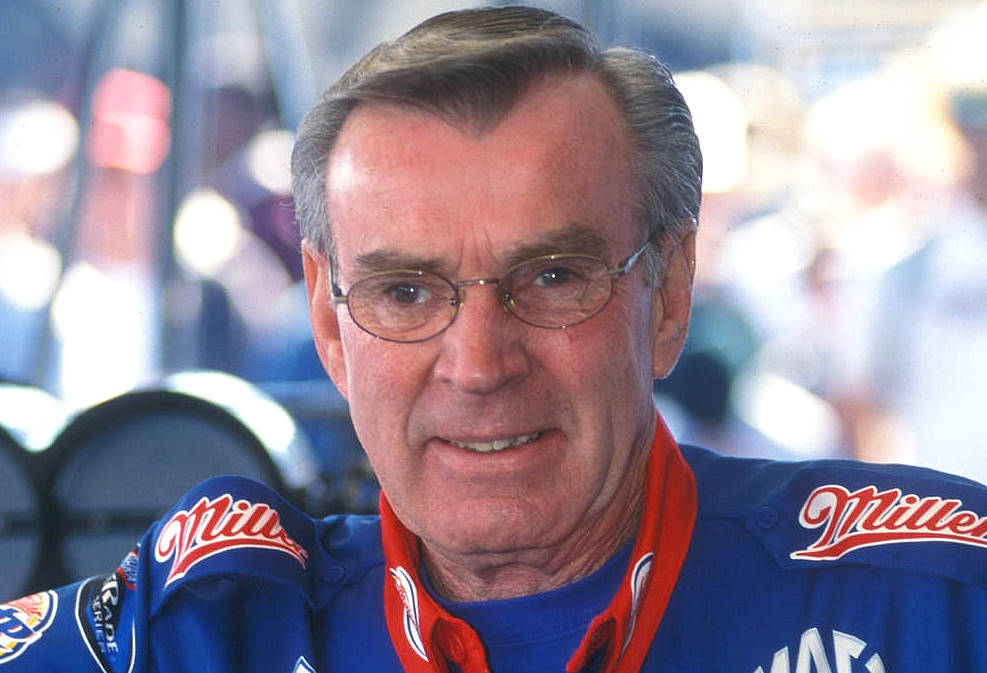 Former NHRA Top Fuel championship-winning driver and crew chief Dick LaHaie passed away Dec. 5. He was 76. LaHaie won the championship as a driver in 1987 and tuned both Scott Kalitta and Larry Dixon to world championships in the class.

In a long and distinguished career in drag racing, LaHaie proved himself of championship caliber of numerous fronts. An NHRA Winston Top Fuel champion as a driver in 1987 and a two-time championship crew chief for Scott Kalitta (1994-95) and Larry Dixon (2002-03), LaHaie was responsible for countless national event wins in a fuel-racing career that spanned 40 years.

LaHaie's first car was a '48 Mercury coupe, purchased at age 16; within three months, he replaced the flathead engine with an Olds V-8. A 'pair of Ford coupes followed, and in 1959, at age 17, he competed in his first drag race at Central Michigan Dragway not far from his Lansing, Mich., base. In his maiden effort, he won the E/Gas class with a 14.35, 110-mph clocking. It would be the first of many trophies that LaHaie would win at Michigan dragstrips.

By the early 1960s, LaHaie had hooked up with Noah Canfield and Charlie Johnson, who campaigned the Glass Chariot AA/Modified Fuel Roadster in the Midwest, and LaHaie filled in as a driver when Johnson couldn't make it. The team moved up to Top Fuel in 1964. LaHaie later went out on his own, racing on the United Drag Racers Association circuit, where he won championships in 1970, 1973, and 1976.

At the 1980 Summernationals, LaHaie won his first national event by beating Jeb Allen in the final. The following year, he was the NHRA Eastern Region Top Fuel champion. In 1982, three significant things happened: He debuted a new Wayne Farr-built chassis at the Winternationals and won; in Indy, his 22-year-old daughter, Kim, debuted as his crew chief; and he sold his business and became a full-time Pro racer.

In 1984, the LaHaies finished fifth in points. In 1985, he scored a Gatornationals victory, and the father-daughter team was quickly becoming the sentimental favorites. The next year, LaHaie enjoyed one of his best seasons, finishing third in points after reaching six finals and winning twice.

The 1987 season proved to be the most fruitful as a driver for LaHaie. He landed Miller Brewing Co. as a sponsor and hooked up with a team owner Larry Minor and won his elusive first Winston Top Fuel crown. During the season, he and Kim won five events, including three straight. Between 1988 and his retirement from driving in 1991, LaHaie scored five more victories and reached his last final at the 1990 Heartland Nationals, losing to Joe Amato.

In 1993, fellow Michigan Top Fuel legend Connie Kalitta called him to wrench for his son Scott's Top Fuel team in 1993 and LaHaie helped turn Scott into one of the most dominant drivers in the 1990s. The tandem finished second to Eddie Hill in 1993, and in 1994 and 1995, the team was unstoppable, winning back-to-back championships before falling just short of a third straight in 1996, finishing second. He also tuned Soctt’ cousin, Doug Kalitta, to his first win, in 1998.

In 2000, LaHaie was vital in the resurgence of the Don Prudhomme-backed Top Fueler driven by Dixon, which finished third that year, second in 2001, and won the championship back to back in 2001 and 2002. LaHaie retired from his crew chief role in 2005 and has been enshrined in numerous drag racing and motorsports halls of fame, including the Michigan Motorsports Hall of Fame and the International Drag Racing Hall of Fame, in recognition of his sterling career.