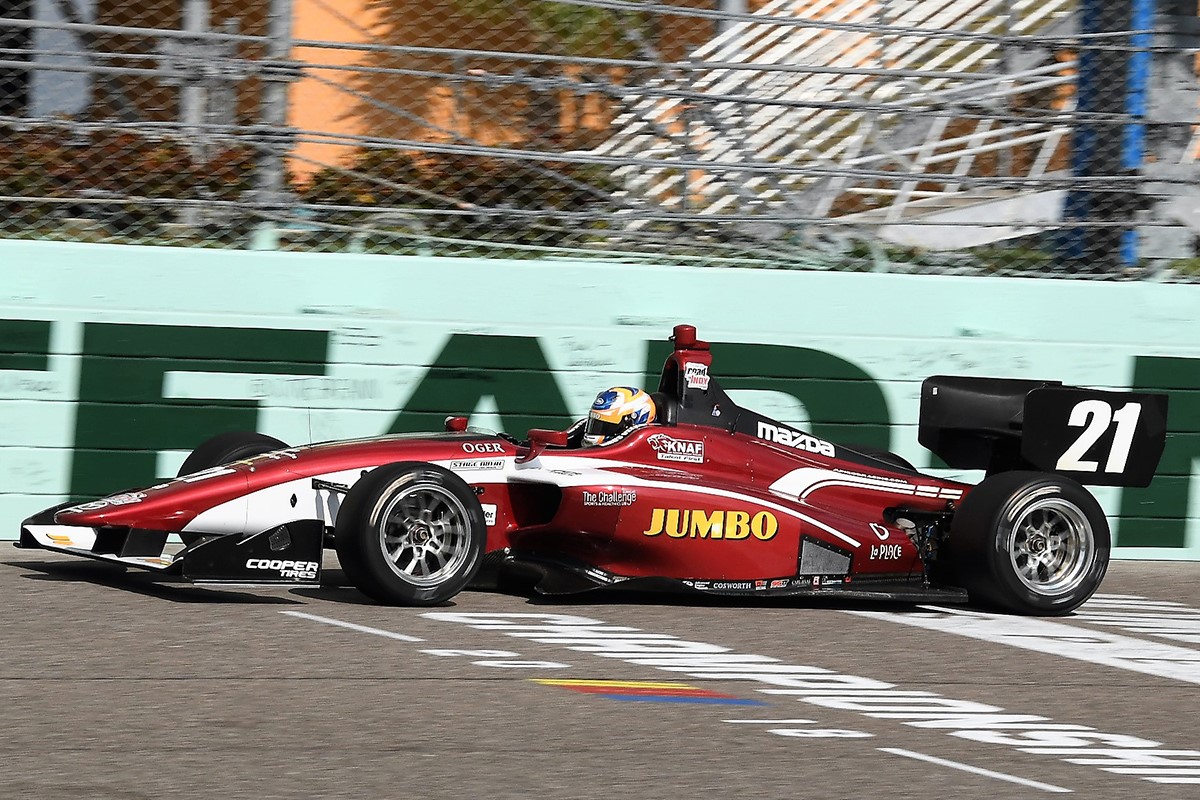 The second day of the final Mazda Road to Indy Open Test of the 2018 season was brought to a premature conclusion by a heavy rainstorm which completely drenched the 2.21-mile Homestead-Miami Speedway road course in south Florida this afternoon. All three levels of the acclaimed Mazda Road to Indy – Indy Lights Presented by Cooper Tires, the Pro Mazda Championship Presented by Cooper Tires and the Cooper Tires USF2000 Championship Powered by Mazda – were represented at the two-day test, although the initial rung on the ladder, USF2000, was the only one to complete two of today’s final three scheduled 40-minute sessions in dry conditions.

VeeKay Edges Super-Close Indy Lights Field
Dutchman Rinus VeeKay and Juncos Racing claimed bragging rights for the day in Indy Lights by virtue of posting a best lap of 1:15.3269 this morning. The lap, representing an average speed of 105.620mph, was fractionally quicker than David Malukas (BN Racing) had managed yesterday, although all five drivers were blanketed by less than two tenths of a second.

“The only session we had today was this morning," reported the 18-year-old, who won this year’s Pro Mazda Championship and will step up to Indy Lights for 2019. “It was very good. The car felt way better than it did yesterday. I used all the grip I had from the new tires, so it was a good way to end the two days of testing."

Rookie Parker Locke, 17, from San Antonio, Texas, stepped up to the plate this morning in Pro Mazda by posting what was to stand as the fastest time of the two-day test for the Canadian-based Exclusive Autosport team.

Locke, who has raced this year both in Formula 4 and Formula 3, found a full second overnight to lead the way with a lap of 1:20.1072, narrowly edging out yesterday’s pacesetter Rasmus Lindh (Pabst Racing), from Gothenburg, Sweden, on 1:20.1396.

Montreal native Antonio Serravalle also made significant gains for the Jay Howard Driver Development team, improving by more than a half-second to 1:20.2341, even though he slipped from second place on the charts yesterday to third by the conclusion of the two-day outing. Serravalle was the only driver to venture out onto a very wet track for what proved to be the final session of the day.

McElrea Back to the Front in USF2000

McElrea took advantage of cooler conditions this morning to turn the fastest lap of the test at 1:24.448, an average speed of 94.215mph.

“The two days went really well," said McElrea, 19, who will head next to Phoenix, Ariz., for the Mazda Road to Indy USF2000 $200K Scholarship Shootout and an opportunity to win a $200,000 prize to take into next year’s Cooper Tires USF2000 Championship. “I really enjoyed learning a new track, getting back into the USF2000 car and working with the Pabst team. It was great to finish P1 overall. Hopefully I get the opportunity to have another go.

“I have been racing on a treaded tire with no aero all year," he continued, “so that is going to be a big help preparing for the Formula Mazda at the Shootout which have slicks and wings. I can’t wait to put what I learned to use in Phoenix."

Shields, who hails from the same Queensland town, Toowoomba, as defending Indianapolis 500 champion Will Power, ended the first session at 1:20.4927 – a margin of just 0.0479 seconds – to continue his impressive form.

Colin Kaminsky, from Homer Glen, Ill., also improved upon yesterday’s fastest time, ending up third quickest today for Pabst Racing, fractionally ahead of Braden Eves, from New Albany, Ohio, who jumped ship from the Cape brothers to BN Racing for today’s outing. Eves led the way for much of the second session before being pipped on fresher tires by both McElrea and Shields in the final few minutes.

“It was a really good couple of days," said Eves, who will join McElrea for the MRTI Shootout. “I learned a lot and I’m very grateful both to the Capes and Bryn Nuttall of BN Racing for allowing me to gain some more experience in a USF2000 car."