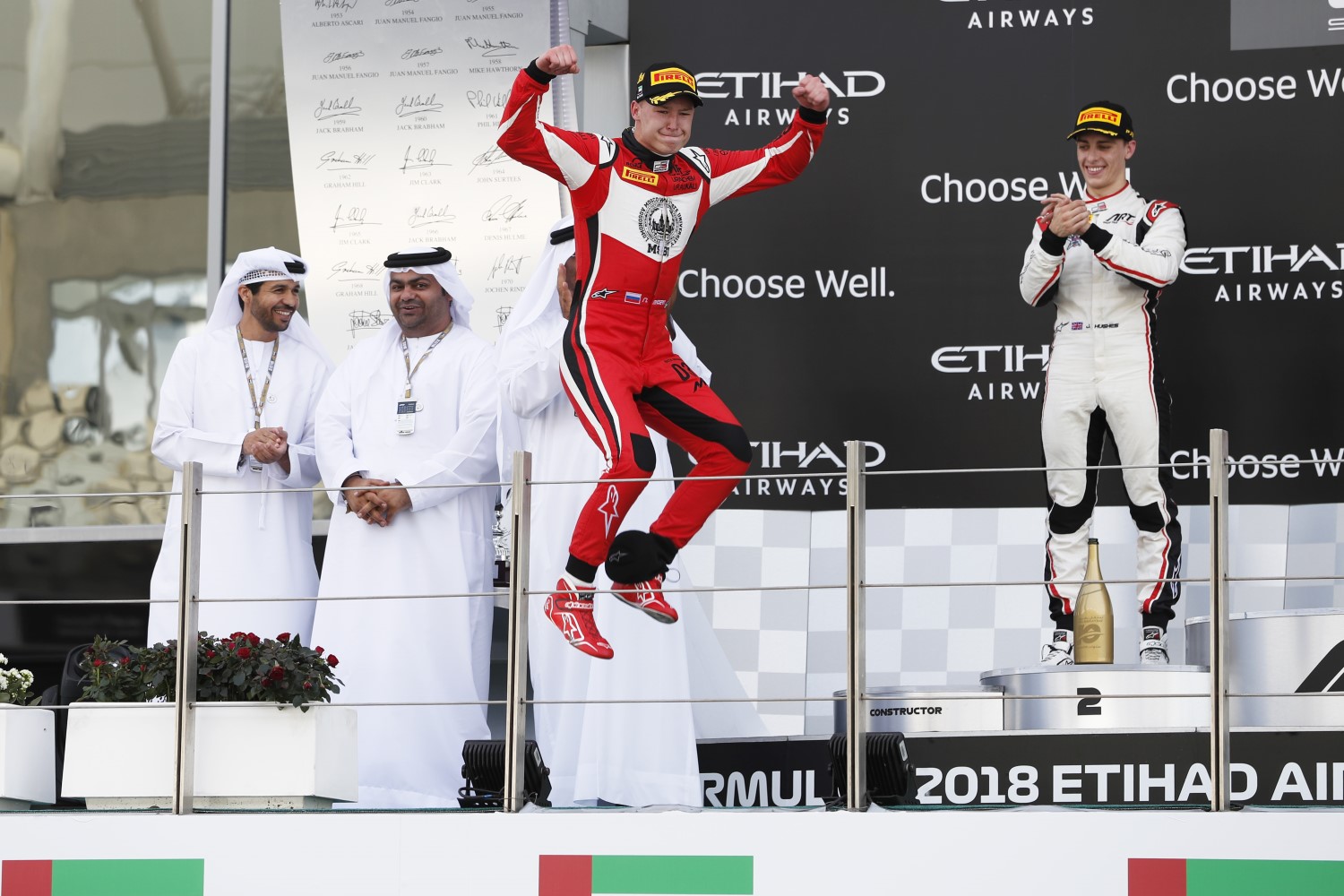 Nikita Mazepin has claimed victory in fine style in this afternoon’s GP3 Series Race 2 at the Yas Marina Circuit in Abu Dhabi, trailing leader Juan Manuel Correa all race before striking on the last lap to grab the win ahead of ART teammate Jake Hughes and Simo Laaksonen.

The final race of the Series took place under sunny skies and soaring temperatures, and when the lights went out poleman Correa made a storming start to lead the pack into turn 1, with Giuliano Alesi and Mazepin taking advantage of a poor start by Hughes to sweep by the Briton, who managed to hold Callum Ilott, David Beckmann, new champion Anthoine Hubert and Leonardo Pulcini behind him as they headed off towards the top of the circuit.

On the run down the long back straight Beckmann and Hubert were side by side and drifting to the right, when Pulcini appeared then and wanted to hold his line: 3 into 1 doesn’t go, with Hubert the squeezed middle as he and Beckmann broke their suspensions and were forced into retirement. When Pedro Piquet was spun into Jannes Fittje at the marina there was little option but to throw out the VSC signs as the marshals got to work.

The race soon went live once again, with Correa building a small gap over Alesi, Mazepin, Hughes, Ilott and Laaksonen, but it didn’t take long for the group to come together, with the Frenchman looking closely for a way into the lead: Correa made him run to the outside at the marina and was defending well, giving Mazepin a sniff of a position, but the Russian had his own problems when he ran deep at the top chicane and had to cut across the corner to hold on.

Bad news was soon on the wires for the top 2: Correa and Alesi were both handed 5 second penalties for speeding under the VSC, potentially destroying all of their good work. Mazepin saw an opportunity and pounced, slicing by Alesi on lap 8 at turn 9, with the Frenchman dropping further back as Ilott and Laaksonen both mugged him 2 laps later.

Mazepin did find a way by Correa at this stage, by running deep at the marina chicane: the Russian learnt his lesson from yesterday though, rounding the bollard and handing back the position to his American rival before recommencing battle. As the laps rolled down Mazepin held station until the final lap, slicing cleanly into the lead at the marina and storming away, with Laaksonen echoing the move by claiming Ilott’s scalp at the same place for P4 on track.

At the flag Mazepin punched the air with joy, claiming the win that was denied him yesterday and securing his vice champion status ahead of Hughes and Laaksonen, with Ilott a disappointed 4th ahead of Ryan Tveter and Correa (who finished P2 before his penalty was applied), with Richard Verschoor and Tatiana Calderon rounding out the points positions.

With the season coming to a close Anthoine Hubert is the 2018 GP3 Series champion, ahead of teammates Nikita Mazepin and Callum Ilott, while ART Grand Prix claimed their 8th Teams’ title ahead of Trident and Campos Racing.