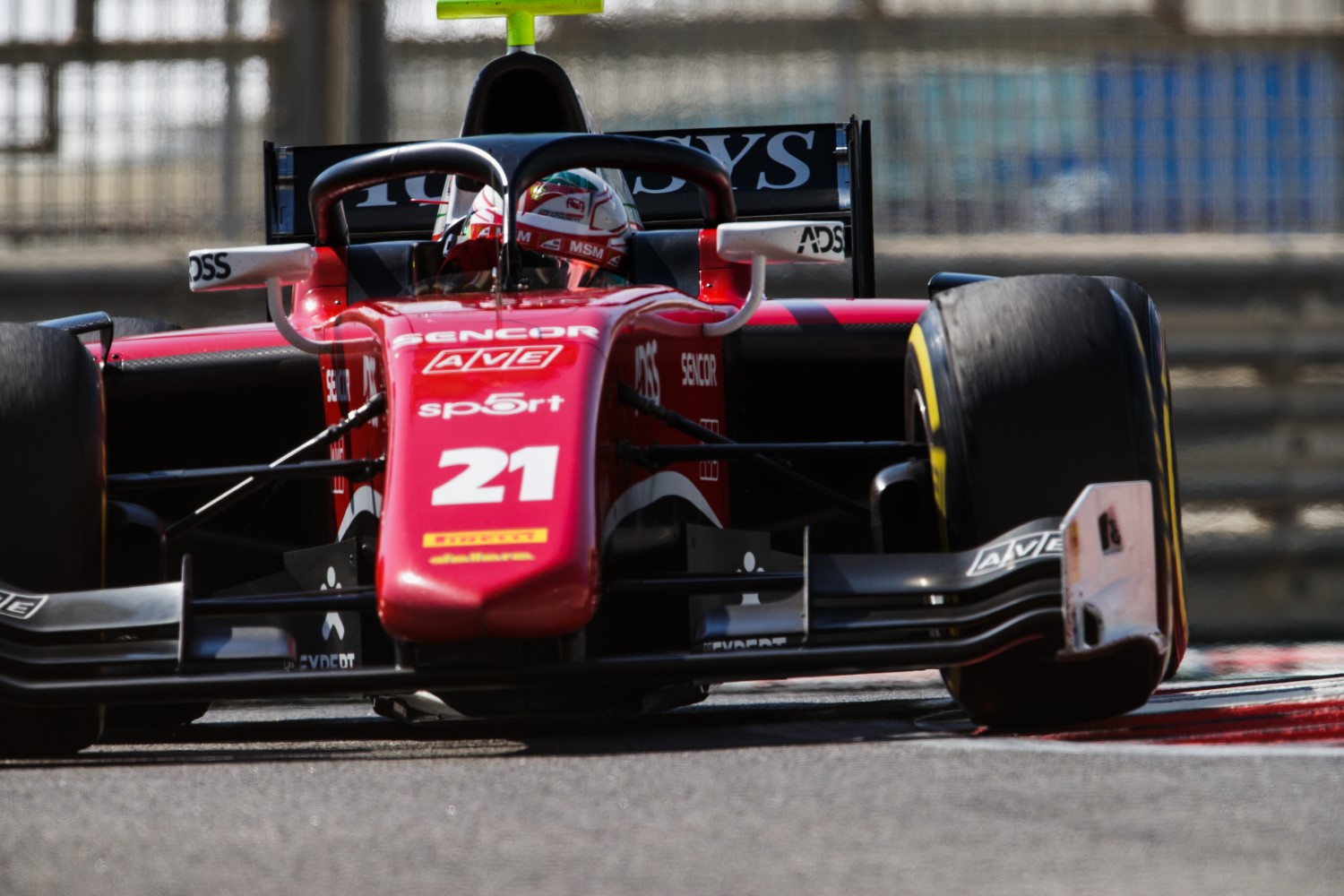 Antonio Fuoco has closed the FIA Formula 2 Championship season with a strong win, his second of the season, in this afternoon’s Sprint Race at the Yas Marina Circuit in Abu Dhabi, leading all race long for victory ahead of Lando Norris and Roberto Merhi.

The win was set up when the lights went down: poleman Merhi has a poor getaway while his fellow front row starter Fuoco had a great one, easily leading the Spaniard into turn 1 ahead of Nyck de Vries, Norris, new champion George Russell, Louis Deletraz, Luca Ghiotto and Dorian Boccolacci up the hill to the top of the circuit.

Norris was soon moving forward, slicing up the inside of de Vries at the marina for P3, while further back Sean Gelael tagged Niko Kari and spun, leaving Tadasuke Makino nowhere to go: the pair were out on the spot and the VSC signs came out as the Finn limped back to the pits and retirement on the first lap.

The race was live again 2 laps later, with Deletraz making a lovely move inside Russell at the marina to move up to P5: Artem Markelov was looking for more too, easily dispatching Boccolacci: Russell soon repaid the favor to take his position back, while the Russian continued his forward momentum by dispatching Ghiotto on lap 7, just as Russell nicked another place by mugging de Vries at the marina for P4.

Russell was soon closing on Norris and looking for a last F2 podium, but too many laps in his countryman’s slipstream meant his front tires were soon unable to assist him, while further back Markelov has tire troubles of his own, running wide all around the circuit and forcing him to look closely at his mirrors as Ghiotto started to come back at him.

Having held off his rival behind, Norris started to look at what he could find ahead of him, closing the gap to Merhi as the laps rolled down until he pounced on the final lap: the Spaniard locked up under pressure at turn 9 and simply didn’t have enough left to retake the position at the marina.

And at the flag it was Fuoco who took all the plaudits, controlling the pace for a strong 2nd victory of the season, with Norris delighting his team by stealing 2nd before almost blotting his copy book by losing control of his car as he waved to them on the pitwall, and Merhi bringing home a second podium of the weekend for Campos. Russell hung on for a lonely 4th, with de Vries following a few seconds back ahead of Deletraz, Markelov and Alexander Albon, who dispatched Ghiotto for the final point of the season in the closing laps of the race.

At the end of the 2018 season George Russell has been declared the FIA Formula 2 champion, with Lando Norris grabbing the vice-championship position ahead of Alexander Albon with today’s podium finish. In the teams’ title fight Carlin have claimed the honors in their debut F2 season, ahead of ART Grand Prix and DAMS.