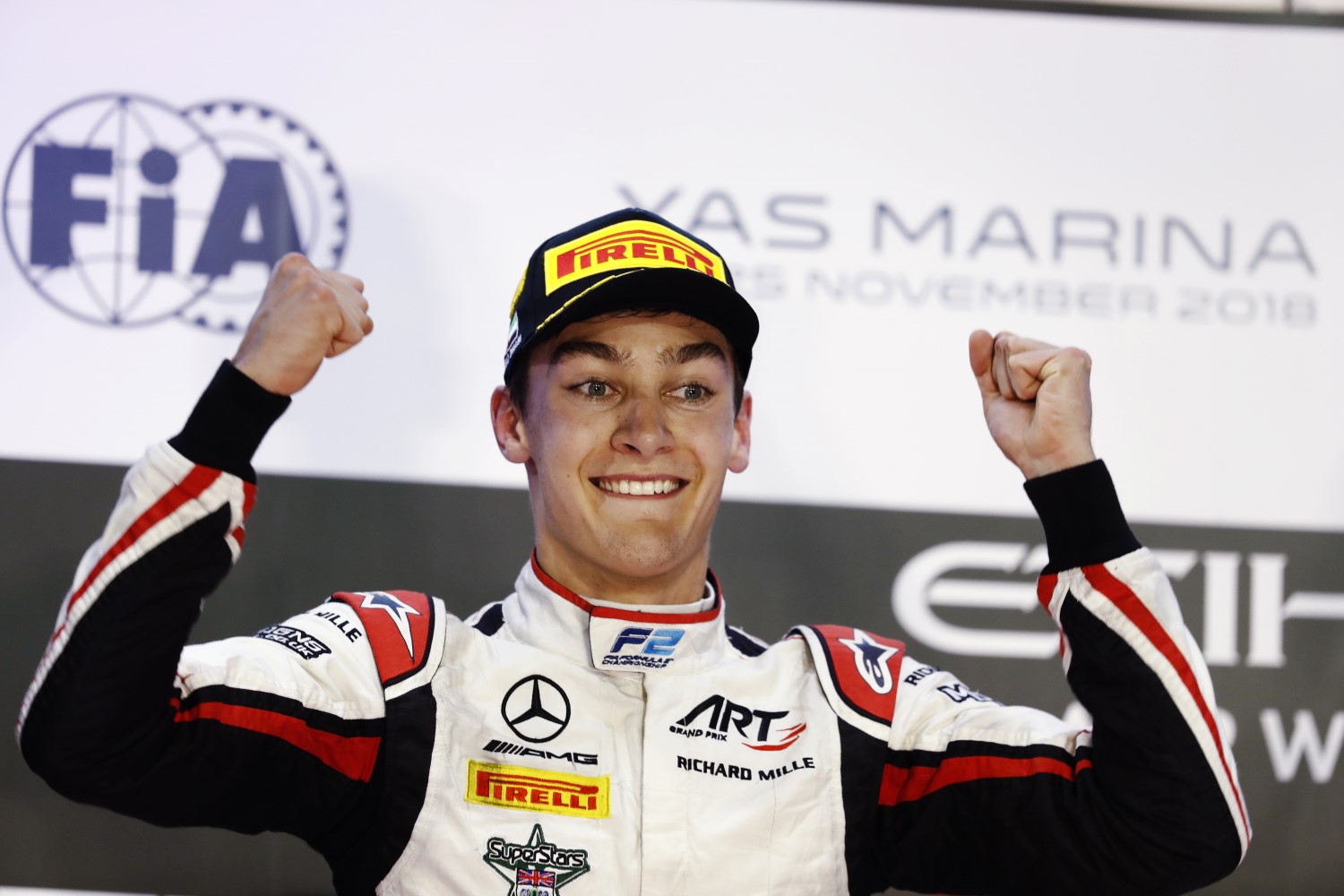 George Russell claimed the 2018 FIA Formula 2 Championship drivers’ title with his seventh victory of the season in an eventful feature race tonight at the Yas Marina Circuit, losing and then regaining the lead while turmoil reigned behind as he sailed to victory by three seconds over Artem Markelov and Luca Ghiotto.

It was the first night start of the season for the grid, bringing with it pressure of starting in the unknown: Russell made a poor getaway from pole, allowing a fast starting Nyck de Vries to grab the lead at turn one from the championship leader and Markelov, but there was chaos behind as DAMS duo Alexander Albon and Nicholas Latifi stalled, along with Sergio Sette Camara.

Arjun Maini was unable to get around the Canadian and the pair had an enormous impact, with Nirei Fukuzumi being tagged as he went around the stricken cars: with 5 vehicles in various states of undress on the front straight there was no choice but to release the safety car, with the remainder of the field coming through the pits each time around, including the restarted Albon and Sette Camara, for 5 laps as the marshals cleared a path for them.

When the race went live Russell was pushing de Vries all around the circuit, with Markelov in hot pursuit: both drivers ran heavily over the curbs in their efforts to gain ground on the man ahead until the Briton headed into the pits on lap 9: an incredible out lap allowed him to blow past de Vries as he exited the pits, and a record-equaling victory was on the cards.

Markelov came in next time around, slotting in right behind de Vries on his return, handing the lead on the road to Ghiotto, one of the few to risk the alternate tire strategy from P16 on the grid. The Italian had a 24 second lead but the rest of the field were closing, cutting 5 seconds in 6 laps before the gap started to reverse, stretch back out to 24 seconds over the next 6 laps and handing Ghiotto an unexpected opportunity at victory.

Unfortunately for the Italian he ran too deep at the marina chicane just before his stop, picking up a 5 second time penalty for gaining an advantage and undoing his good work: he served it before his team swapped tires on lap 26, and re-emerged in P5 on fresh rubber. He made short work of Lando Norris and was soon storming after de Vries, who had been unable to contain a charging Markelov a few laps earlier.

On the penultimate lap Ghiotto blew past de Vries at the marina, but ran out of time to improve his podium position: Russell cruised to the win, equaling the F1 feeder record of 7 wins held jointly by Stoffel Vandoorne and Charles Leclerc, by 3s ahead of Markelov, who was almost 5s to the good over Ghiotto at the flag. De Vries was disappointed with P4 ahead of Norris, with Louis Deletraz a second ahead of teammate Antonio Fuoco after he mugged Roberto Merhi for 7th on the final lap, and Tadasuke Makino and Jack Aitken rounding out the points in the final feature race of the season.