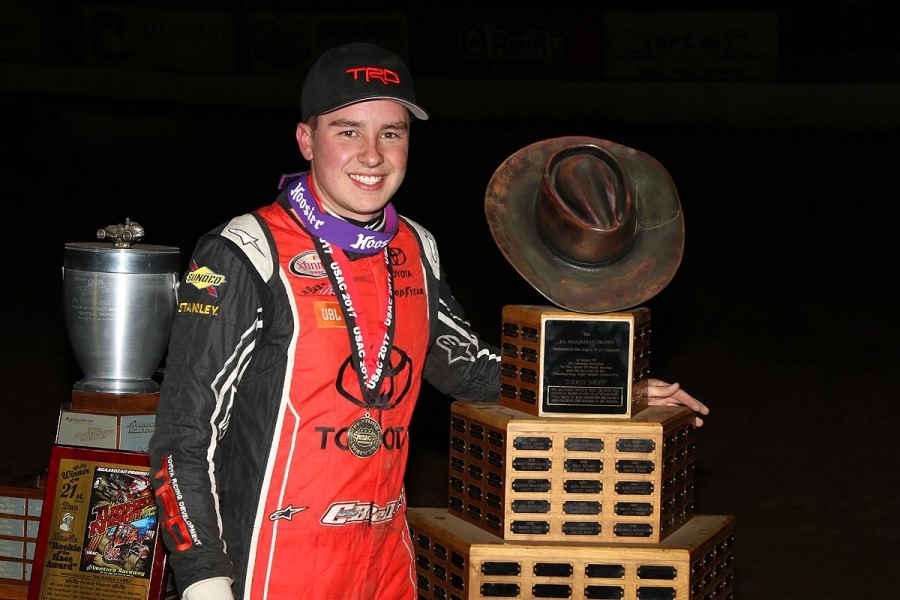 Bell, who raced for the NASCAR Xfinity title last weekend in Miami, won the midget event for a third time. It marked his second consecutive victory in the event and he’s had to hold off Larson the past two times. Larson was seeking to win the race for a third time.

For the second consecutive Thanksgiving night, however, Bell had to fend off a familiar foe who was on a quest to reach the same exclusive club of three-time winners in Keith Kunz Motorsports/Curb-Agajanian teammate Kyle Larson.

After applying relentless pressure to Larson throughout much of the second half of the 98-lap event, with just 12 laps remaining, and mired in lapped traffic, Bell slipped underneath Larson between turns three and four to grab a lead he wouldn’t relinquish, adding a third “Turkey Night" trophy to his ever-growing collection following previous wins in 2014 and 2017.

Bell, the 2013 USAC P1 Insurance National Midget champion from Norman, Okla., sang the praises of playing the role of the chaser in traffic, as a cop would in the hot pursuit of a suspect on the lam.

“I just got lucky there being in second," Bell admitted. “Someone was making the bottom work underneath me in three and four and I figured it was going to get better and better. I trapped Kyle up there with a lapped car and I was able to squeak by in the rubber, stay down there and not miss my marks."

Bell, always the hard charger, began the race from the ninth position, but steadily climbed his way up the scoring pylon into the top-three as outside front row starter Chad Boat held the advantage up front for the first half of the main.

Larson, a two-time “Turkey Night" victor in 2012 and 2016, had already begun his surge to the front by that point, continuously taking peeks at the lead. Nonetheless, Boat was able to dodge every lawn dart thrown in his direction to remain at the point as he aimed to join his father, three-time winner Billy Boat, as a fellow “Turkey Night" winner.

Yet, on lap 51, Larson finally got it rolling on the top side to drive around Boat for the lead exiting turn two, then immediately darted across Boat’s nose to steal the bottom entering the third turn to secure the position. Bell and Tucker Klaasmeyer followed suit on the following lap by getting around Boat for second and third, respectively.

Now, the duel would commence between two giants of dirt track midget racing discipline, each at the peak of their prime. Following fourth-running Shane Golobic’s spin on lap 68, the race transformed into just your weekly 30-lap affair, albeit with a nice payday and a prestigious attachment being placed next to the eventual winner’s name. That’s when Bell turned up the wick.

On the lap 71 restart, Bell took a run at Larson, sliding side-by-side with his teammate into turn one to no avail. Bell stuck with it again in turn one the next lap around the 1/5-mile dirt oval, unable to make the pass stick, but sending a message to Larson that it was game on.

On the 74th circuit, Bell slid past Larson on the entry into turn one, but Larson ably countered by driving underneath Bell off turn two to retake the lead, closing the door on Bell in the process into turn three as the pair’s wheels glanced off each other.

Bell ramped up the momentum, running his No. 21 high and wide off turn four as he rocketed down the front straightaway, which gave him a full head of steam as he dove to the bottom of Larson into turn one. He did so on lap 80 as he slid past Larson once again to snag the race lead just long enough for the flashbulbs from the photographers to light up the sky before Larson crossed over and raced back to the lead on the back straight with lapped traffic quickly coming into view.

With 12 laps remaining, Larson entered turns three and four on the high line to get around fellow teammate Sam Johnson. The line proved to be too long of a way around as Bell stuck his racecar underneath Johnson’s against the bottom berm and propelled himself to the lead.

Traffic still loomed for Bell, however, as he carefully and successfully maneuvered under teammate Ryan Robinson and Golobic into the first turn with six laps remaining with Larson in tow.

As 2018 USAC National Midget champ, and sixth-place runner, Logan Seavey sat sideways in turn one to bring out the yellow on lap 96, it put a halt to the traffic situation, but Bell had to endure a test of his patience as two more additional cautions and two more restarts weighed on his mind.

“I knew there was a chance he was going to circle me on the top," Bell explained. “I just wanted to see that race end because you can’t keep giving him try after try after try."

Larson greeted the opportunity on the final restart, hitting the top and used a huge drive off the exit of turn two before diving down to the bottom in three to get underneath Bell. The meticulous Bell was well-equipped to handle the charge, occupying the bottom and thwarting any chance of Larson attempting a slider.

Larson made one final run at Bell off two on the final lap, closing right on the tail of Bell midway down the back straight before splitting to the bottom of the entry of three, slightly scraping his left front wheel on the top of the berm before banging his right front wheel into Bell’s left rear. The contact knocked Larson slightly askew, but Bell took a lickin’ and kept on tickin’, bringing his ride home for a 1.5 car-length victory over Larson, Boat, Klaasmeyer and Tyler Courtney.

The victory was the 23rd USAC National Midget win for Bell, moving him past Bobby East and Shorty Templeman on the all-time list and into 20th where he’s now tied with Tom Bigelow, Pancho Carter, Tommy Copp, Kevin Olson and Billy Vukovich.

For Larson of Elk Grove, Calif., it was his sixth top-four finish in six “Turkey Night" starts, but it was just one lap, one slip-up that might’ve been the factor in preventing him from becoming a three-time winner.

“I just made a slight mistake in traffic sliding in three and four to clear a lapper," Larson recalled. “He was able to sneak by on the bottom. That’s about when it started taking rubber in three and four. I wish I would’ve done just a little better job in traffic. It seems like every time he beats me, it’s because of traffic. I just have to work on my craft some and try to get better and hopefully start beating him here."