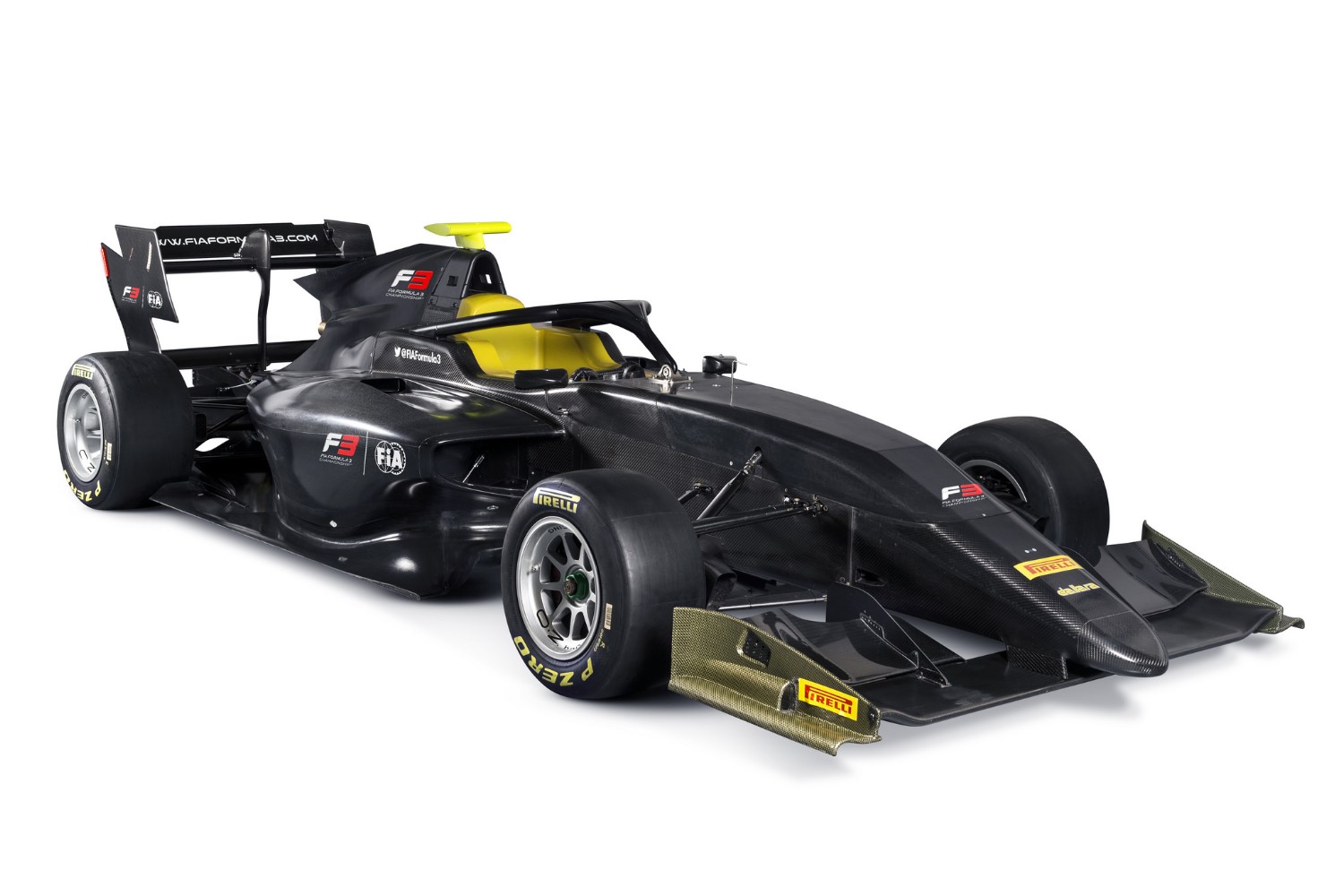 The FIA Formula 3 Championship unveiled the F3 2019 car to the international media at the Yas Marina Circuit today. The new car, which will be raced in the 2019, 2020 and 2021 seasons, was revealed in the Formula 1 paddock ahead of the final F1 Grand Prix of the 2018 season.

The F3 2019 is the best compromise between the current GP3 Series and FIA Formula 3 European Championship cars. It features a naturally aspirated 3.4 liter bespoke Mecachrome 6 cylinder engine, which delivers 380 HP at 8000 rpm. The philosophy of this car’s technology was to find a middle ground between performance and cost effectiveness wherever possible.

The new Formula 1 support category is being formed as the current FIA Formula 3 European championship and the GP3 Series are merging together for 2019, with the aim of simplifying the junior single-seater ladder.

The aerodynamics were optimized to facilitate overtaking with very low ride height sensitivity and a wide range of suspension set up possibilities. The car also complies with the FIA F3 2019 safety standards which include anti intrusion panels and a steel Halo.

The car has made a successful shakedown on October 11th at the driving school circuit in Nevers Magny-Cours and later completed 165 laps over the following two weeks also in Magny-Cours. The development program will run over a number of tests across the remainder of the year to accumulate sufficient mileage and ensure that a reliable car will be delivered to the teams. Three test sessions in December will be focused on performance testing, where the car will be pushed to its limits.

A first machine will be handed over to the teams in mid-January 2019, and the second and third car will be delivered together in February. There will be a shakedown with one car per team during that same month to allow them to become acclimatized to it ahead of the first official pre-season test.

Pirelli is the official tire supplier to the championship, and has been integral to the design process to ensure continuity with respect to the tires.

FIA Director of Formula 1, Charlie Whiting, said: “We are pleased to unveil the exciting new 2019 FIA Formula 3 car here in Abu Dhabi, marking the final step in the process of bringing the FIA Formula 3 Championship onto the same platform as Formula 2 and Formula 1, which has been an important goal for the FIA.

“This car, while more powerful and spectacular than previous iterations, will include the latest safety standards for single-seaters, in line with the developments we continue to make at the very highest levels of the sport.

“Formula 3 has a long and rich history, and to see it become a regular part of Grands Prix weekends is the start of an exciting new chapter. The category will continue to prepare and educate young drivers, giving them the best possible opportunity to achieve their ambitions. We look forward to continuing our strong partnership with the Promoter and Formula 1Â®, and we are proud to unveil this impressive new car alongside them."

FIA Formula 2 Championship CEO Bruno Michel said: “I am very pleased to present the F3 2019 car which will race in the first three year cycle of the FIA Formula 3 Championship. Our focus was to provide a safe and challenging car which will enable close racing and encourage overtaking. When designing this car, we also kept in mind cost effectiveness in order to limit operational costs for the teams, but also deliver an attractive package.

“I am very confident that this car which matches the FIA Formula 3 2019 safety standards will deliver great racing and provide the fans with high-quality entertainment. It is the perfect tool for young drivers to make their way up the motorsport ladder with the goal to graduate to Formula 2 and ultimately, hopefully, race in Formula 1."

Compromise between performance and cost effectiveness wherever possible.

Extensive use of composite materials.

All in one ECU- GCU – Data logger equipment.

Front and rear wing made out of carbon composite material.

Three specific compounds developed for GP3 to provide the most suitable compound for every circuit.