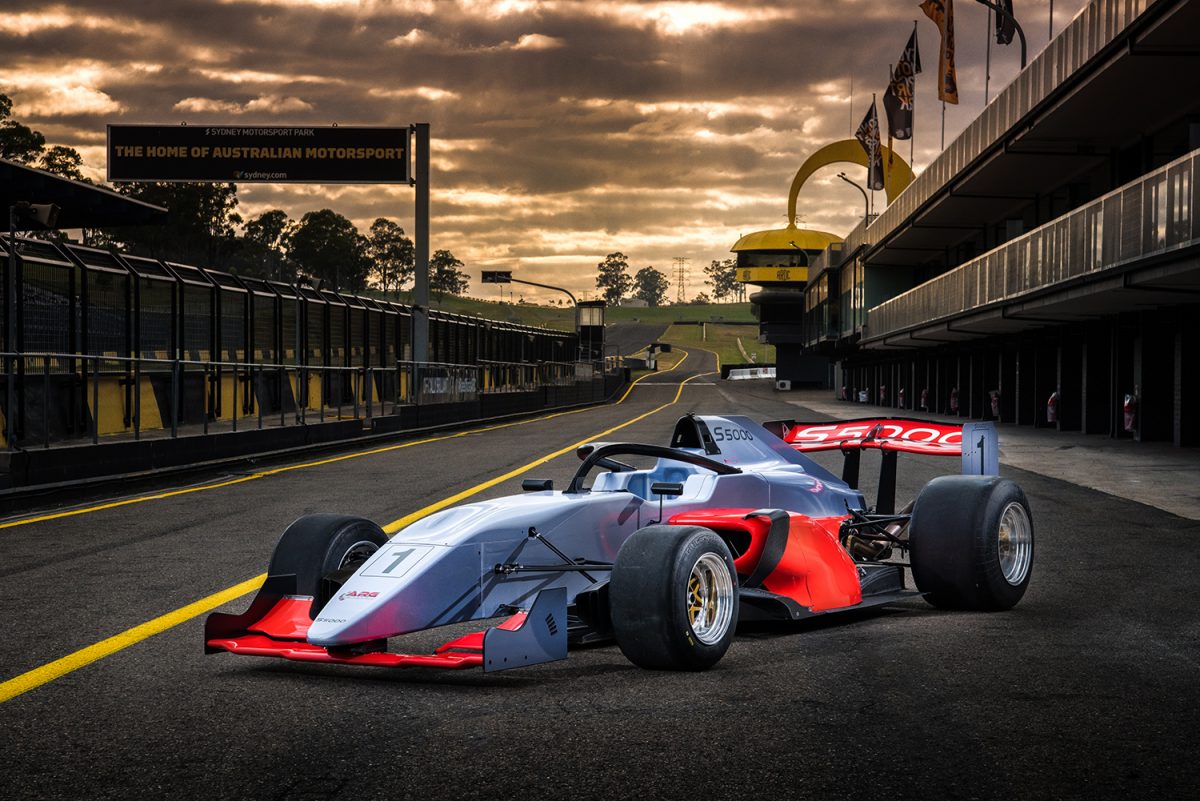 The fastest motorsport category to hit Australian shores in decades – S5000 – has been unveiled at Sydney Motorsport Park today.

In a spectacular launch in front of the media, competitors and distinguished guests, the S5000 begins a new chapter in high performance open wheel racing in Australia.

The launch also featured confirmation of a preliminary racing calendar for the inaugural 2019 season.

It is anticipated that these modern, sleek race cars, powered by a sealed 5.0 liter, 560hp V8 Ford Coyote ‘Aluminator’ engine, will break the outright lap records at almost all of the venues it visits.

Other possible calendar inclusions could also see the revival of a Tasman Series, including events in New Zealand over the summer.

The S5000 chassis will feature the halo protective device, making it the first Australian racing class that will feature the FIA-mandated safety feature.â€¨â€¨After initial track laps at the ‘media and competitors’ day in Sydney today, the S5000 machine heads to the Newcastle street track to complete demonstration laps in the final round of the Virgin Australia Supercars Championship.

“It is a great honor to see the fruition of countless hours of planning and work come together here in Sydney today," said Matt Braid.

“This is the motorsport category that is going to shake up the industry. For many years, we’ve been yearning for a local, cost-effective, premier open wheel motorsport category, and we have no doubt that the S5000 package is the car to deliver what is needed.

“They will be fast, loud and entertaining, and since revealing the car three months ago, we anticipate that the best drivers and teams from around Australia and abroad will be part of this history-making category.

“The revealing of the S5000 is truly a landmark day for Australian motorsport," said Chris Lambden.

“There is now the certainty that teams and drivers have been looking for to enable them to commit and plan for 2019. S5000 is going to offer the ‘big-bang’, serious open wheeler racing that Australia hasn’t seen for decades, and there’s no doubt that the car and competition package will excite people."

“It’s the ground base on which the future of S5000 will be built.

“There are discussions also going on with Supercars, among other promotors, with a view to S5000 running at some of their events, which will certainly add some icing to the cake."

“We are really looking forward to welcoming S5000 on to the Shannons Nationals calendar next year," Eugene Arocca.

“There has been significant interest in this new category from competitors and fans alike. Feedback from the initial launch of S5000 was extremely positive and sparked plenty of passionate discussion about the exciting future of open-wheel racing in Australia. S5000 is a welcome addition to the Australian motor sport landscape.

“The Shannons Nationals in 2019 will be a terrific mix of really competitive categories, including some of the newest in Australia with both S5000 and TCR Australia set to debut at the first event in Sydney next year. We can’t wait."

WATCH THE LIVE STREAM FROM THE LAUNCH