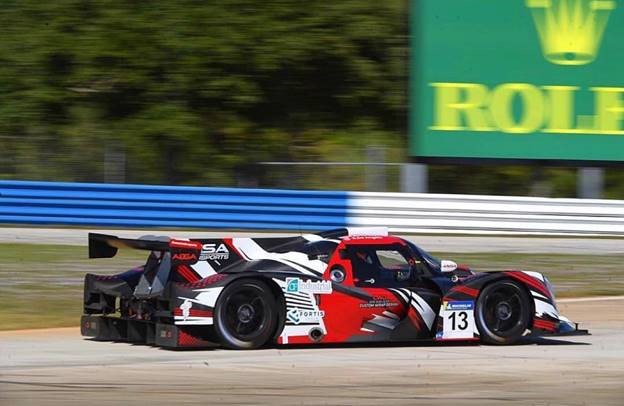 F3 Americas champion Kyle Kirkwood’s winning reputation followed him to the sportscar world, adding yet another victory to his bourgeoning collection. In his Ligier JS P3 debut, Kirkwood took the checkered 2.278 seconds ahead of second place during the inaugural four-hour Michelin IMSA Sportscar Encore endurance at Sebring International Raceway on Sunday. The victory marks Kirkwood’s 28th win out of 32 starts in 2018.

“The whole race was just incredible," Kirkwood said. “It was definitely the most mentally and physically draining race I’ve ever competed in. I am so thankful that ANSA Motorsports, Onroak Automotive and Ligier gave me the opportunity."

Driving the red, black and white No. 13 ANSA Motorsports prototype, Kirkwood’s team claimed the fastest practice time in the first session and the second-fastest time Practice 2 on Saturday. His partner, 2018 IMSA Prototype Challenge Roar before the Rolex 24 winner Roman De Angelis, qualified off-pole in second, and wheeled the Ligier JS P3 into first place before jumping out at the two-hour mark to make the driver change with Kirkwood.

"Roman did an amazing job to give me a great starting position," Kirkwood continued. “He qualified us second and maintained position. The team took a gamble with the pit stops and it worked perfectly in our favor to put us in first. All I had to really do was keep my head down and push, which is something I was able to do all year."

Kirkwood and De Angelis spent the entire race inside the top-five. Kirkwood took the lead for the final time with 45 minutes remaining after Katherine Legg made her last required pit stop. The Florida-native then pulled away from the field again following a restart with less than 30 minutes left on the clock to secure the second win of the year for ANSA Motorsports.

“The restarts were pretty straight forward. I never had second immediately behind me and there’s been so many restarts that I’ve lead this year, that it took the pressure off," said Kirkwood.

Also debuting in the IMSA LMP3 class, Formula 4 United States Powered by Honda champion Dakota Dickerson of San Diego made up exceptional ground as the second driver of the No. 2 Ligier JS P3 ANSA Motorsports car, clocking similar fast-times to the race leaders. Dickerson broke into the top-10 before mechanical issues at the mid-point of the enduro forced him to retire the race.

“It is unfortunate that engine issues took us out of the race while running the same pace as the leaders, but that’s all part of it," said Dickerson. “All in all it was a super fun experience getting to drive the ANSA Motorsports’ Ligier JS P3. I’ll definitely be looking for more opportunities to drive a Ligier in LMP3 in 2019.There is so much that goes into endurance racing and I am very thankful to Onroak Automotive for the opportunity."

Onroak Automotive North America presented the opportunity to compete in a Ligier JS P3 after both Kirkwood and Dickerson clinched their respective F3 Americas and F4 U.S. titles early.