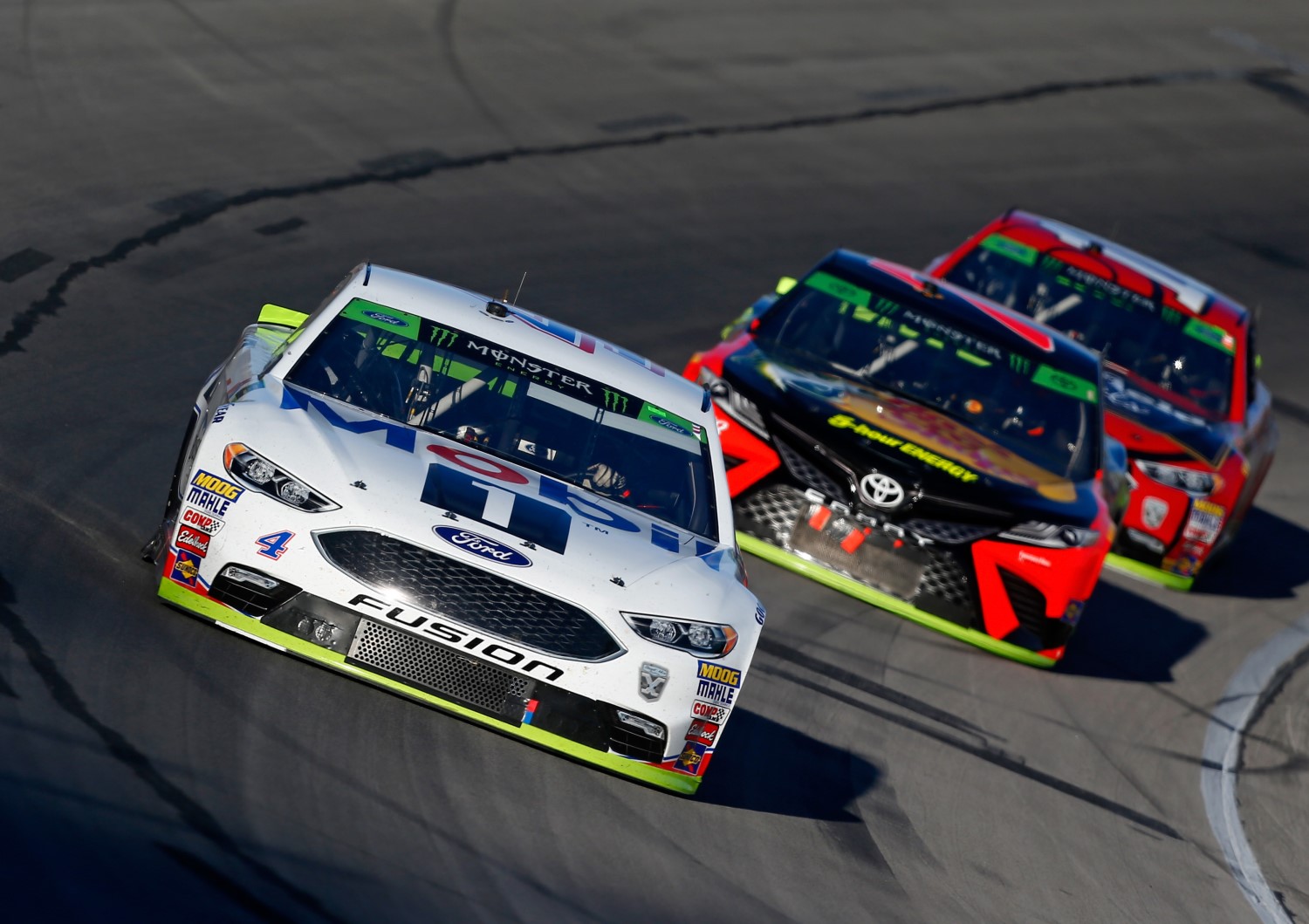 UPDATE Following today's announcement of the L-1 penalty assessed to the No. 4 Stewart-Haas Racing team, NASCAR Senior Vice President of Competition Scott Miller said the penalty was issued due to an illegal spoiler on Kevin Harvick's winning racecar.

The spoiler, which is normally mounted flush centered with the decklid, was found to be the correct height, but was offset to the right by 200 to 300-thousandths of an inch. The offset allowed the spoiler to stick out more as the car went through the corner, giving the car more downforce in the corners.

While NASCAR mandates that teams use a spoiler supplied by a single supplier, Stewart-Haas Racing manufactured their own spoiler. Miller said the alterations made to the spoiler were made specifically to circumvent NASCAR's rules.

"As black and white as it gets," Miller said.

Following his victory in Sunday's race at Texas Motor Speedway, Harvick's car was taken to the NASCAR R&D Center in Concord, N.C. for further inspection, where the irregularities were found. The changes made to the spoiler were small enough have an competitive advantage on the racetrack, but still not be noticeable in a visual inspection.

"It's not something that by any means would stick out like a sore thumb. It's definitely something that you would have to take a little bit deeper dive to see," said Miller. "There was something that one of the inspectors saw that kind of made them a little bit suspicious, and that's why we took it off when the car got back to the R&D Center."

In response to this latest incident, NASCAR will remove the spoilers from the racecars for further examination during pre-race inspection at this weekend's race at Phoenix.All four of the championship-contending cars in the season-finale race at Homestead-Miami Speedway in two weeks will undergo a rigorous post-race inspection to make sure all the cars are legal.

Going forward, Miller said, NASCAR is looking into stiffer penalties for such infractions – including taking away the victory if the winner race car is found to be illegal.

"We realize that we kind of probably need to ramp up the severity of what goes on at the racetrack, and we're hoping that we can change the culture to where we don't have to play this cat-and-mouse game with the teams all the time because we have to make it a little bit more consequence for them for — than just saying, take that off," said Miller. "'Take that off' isn't obviously working anymore. As I said earlier, we'll be looking at the entire deterrence model over the winter." – by Brandon Reed/AR1.com

11/07/18 Kevin Harvick was flagged the winner of Sunday’s Monster Energy NASCAR Cup Series race at Texas Motor Speedway, and seemed to lock himself into the Championship 4 at Homestead-Miami Speedway in two weeks.

But the wheels came off of on Wednesday morning, as NASCAR announced a massive penalty that leaves Harvick’s win encumbered, and puts him just three points above the cutoff.

NASCAR officials assessed an L-1 penalty on the No. 4 Stewart-Haas Racing team after discovering post-race an infraction with the spoiler on the winning Ford at NASCAR’s Research and Development Center.

Harvick’s win on Sunday is now encumbered, meaning it will not give him an automatic berth into the Championship 4. The team also loses 40 drivers point and 40 owner points, leaving him on the bubble – just three points ahead of teammate Kurt Busch at the cutoff line.

Harvick's Crew Chief, Rodney Childers, has been fined $75,000 and is suspended for the next two MENCS races – effectively sidelining him for the rest of the season. Car Chief Robert Smith has also been suspended from the next two events. – by Brandon Reed/AR1.com