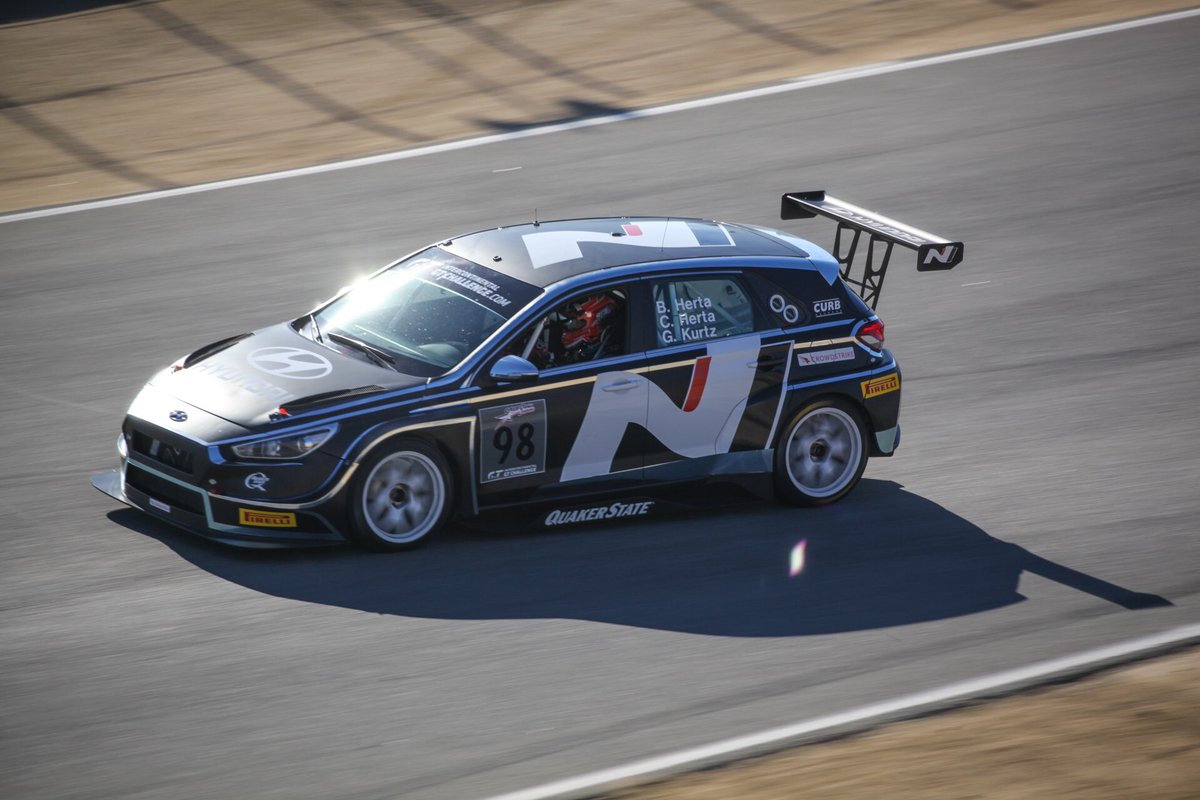 The victory was the eighth of the 2018 sports car season for Bryan Herta Autosport and marked the first U.S. endurance contest for the successful Hyundai i30 N TCR machine. BHA won seven races in the Pirelli World Challenge this year with Michael Lewis and Mark Wilkins and the squad captured the TCR Team points championship. In addition, Hyundai won the TCR Manufacturers’ point title.

On Sunday, the driving trio of the father-son Herta combination and sports car regular Kurtz came from the back of the 32-car field to capture the TCR honors at the historic 2.238-mile, 11-turn Monterey Valley road circuit. In the Hyundai’s initial eight-hour race performance Sunday, the No. 98 car complete a sensational 276 laps with eight pit stops and solid driving changes.

“It was an awesome day for us and I’m really happy how the race turned out for our No. 98 car," said team owner Bryan Herta, a two-time CART IndyCar race winner at Laguna Seca. “We had great pit stops and the car was fast all day. I got knocked off the track once, but we didn’t any trouble other than that. Hats off to the team and the drivers. This event was our first endurance race and the first for the Hyundai i30 N in North America. It performed flawlessly. It was a great run for our Hyundai i30 N since we beat a lot of cars overall that we shouldn’t have had any business beating.

“I really enjoyed racing with my son (Colton). It is always nice when you can take home a trophy and spray some champagne at the end of the day. It's a shame the other (No. 98) car had their issues early. But we've shown that the Hyundai is an excellent car for endurance racing too."

Kurtz, driving the Hyundai i30 N for first time, was impressed with car and BHA team performance Sunday in his debut racing with the Herta father-son team.

“I really had a great time racing with Bryan and Colton this weekend," said Kurtz, the 2017 Pirelli World Challenge GTSA series champion. “The car was fantastic all weekend and faster than many of the GT4 cars in the field. This race was my first long endurance event and it was my first with the front-wheel drive race car. The team was excellent on the pit stops and the car ran very well all day. It was fun to step to the top of the winner’s circle podium."

While the No. 98 BHA Hyundai i30 N team took the category win, it was a tougher day for the No. 99 BHA Hyundai i30 N TCR car and drivers Lewis, Wilkins and young Mason Filippi. The No. 99 car was forced out of the event after 58 laps due to an incident in the famed “Corkscrew" portion of the track. Two GT cars spun in front of Lewis and collected the No. 99 machine in the mishap.

Due to the car’s front-end damage, the No. 99 Hyundai i30 N was forced to retire from the event.