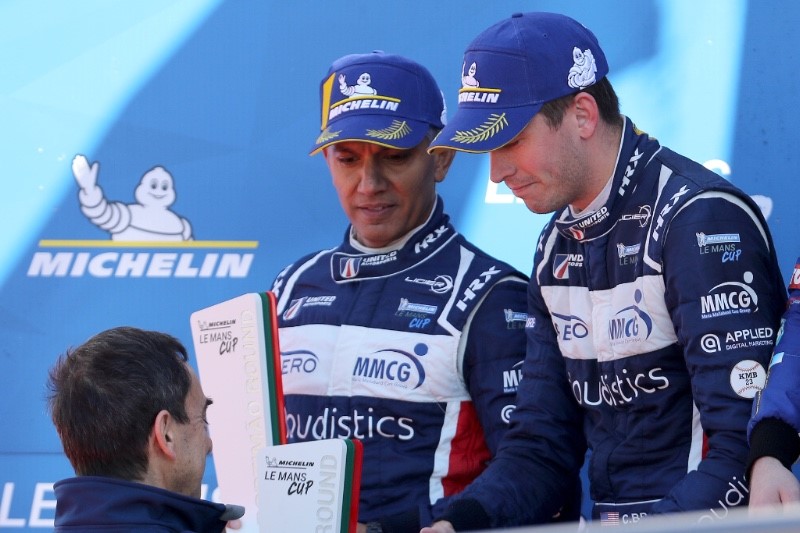 The No. 22 United Autosports Ligier-Gibson of Filipe Albuquerque and Phil Hanson took a second consecutive ELMS victory with a hard fought win on the twist and turns of the Autodromo Internacional do Algarve in Portugal. Local hero Albuquerque crossed the line just 0.5 seconds ahead of Will Stevens in the No. 23 Panis Barthez Competition Ligier.

The No. 32 United Autosports Ligier of Will Owen took the final podium position after the No. 26 G-Drive Racing Oreca, which had crossed the line in 3rd place, was given a 10 second penalty for an earlier track limits infringement.

The LMP3 category was won by the No. 13 Inter Europol Competition Ligier of Martin Hippe and Jakub Smiechowski, a debut win for the Polish team. However it was all smiles at RLR MSport when the crew of the No. 15 Ligier – Job Van Uitert, John Farano and Rob Garofall finished in 5th place to clinch the 2018 LMP3 Driver and Team titles.

History was made in LMGTE when Gianluca and Giorgio Roda became the first Father and Son driver pairing to win an ELMS title. They brought home the No. 88 Proton Competition Porsche with their Italian teammate Matteo Cairoli in third place to secure the Team and Driver titles, with Cairoli, who had missed the race in Monza, securing the Vice Champions position in the Drivers Championship.

It was all smiles in the Proton Competition garage when the No. 77 911 took the checkered flag to take the first win of the 2018 season for Christian Ried, Dennis Olsen and Marvin Dienst.

ACTION PACKED SEASON FINALE
The race started under sunny skies but air temperature was a low 15 degrees, especially in the strong wind blowing across the circuit.

Pierre Ragues in the No. 29 Duqueine Engineering Oreca led the 39 car grid across the line to begin the 4 Hours of Portimao but Timothe Buret in the No. 23 Panis Barthez Competition Ligiergot alongside the pole car and took the lead. The No. 9 AT Racing Ligier of Mikkel Jensen also got ahead of the LMP3 pole sitter Lucas Legeret in the No. 19 M Racing YMR Norma at the start, while in LMGTE Nic JÃ¶nsson in the No. 83 Krohn Racing Ferrari was leading the class by the end of the opening lap from the back of the grid.

There was a couple of incidents on the opening few laps with the No. 17 Ultimate Ligier heading to the pits with a puncture after contact with an LMP2 competitor and the No. 26 G-Drive Racing Oreca of Roman Rusinov being clipped into a spin by the No. 28 IDEC Sport Oreca of Memo Rojas, Rojas receiving a drive through penalty for causing the collision.

The No. 88 Proton Competition Porsche of Gianluca Roda was clipped into a spin with the rear diffuser of the car coming away and spreading debris across the track. The Race Director called the first Full Course Yellow of the race.

At the restart Pierre Ragues got a better run into the first corner, passing the No. 23 Ligier of Buret for the lead. The No. 88 Porsche was missing the rear part of the car but Roda was still able to make progress through the field, catching and passing Jonsson’s Ferrari for the lead of the LMGTE class.

Felipe Nasr was pushing his way through the field towards the leaders and after one hour of racing was closing on the top two cars in the No. 47 Cetilar Villorba Corse Dallara. The Brazilian passed Buret for second and then closed up and then passed Ragues for the lead after 1 hour and 18 minutes of racing. Pierre Ragues headed to the pits to hand the Duqueine Engineering Oreca over to Nelson Panciatici but on the out lap the rear left suspension collapsed and Panciatici was forced to head back to the pits for a long stop for repairs.

The No. 6 360 Racing Ligier was also another retirement after a exhaust manifold cracked, melting a wiring loom. The car that was lying in second place in the LMP3 championship was out of the running.

Filipe Nasr headed to the pits from the head of the LMP2 field but cut right across the front of the No. 77 Proton Competition Porsche and was given a stop and go penalty for causing a collision. The woes for the No. 47 Dallara continued when the car was pushed back into the garage for repairs, dropping the Italian team down the order even further.

Meanwhile in LMGTE the No. 80 Ebimotors Porsche of Fabio Babini was leading the class from the No. 77 Proton Competition Porsche of Christian Ried. Babini handed over to Gianluca Giraldi but the Italian collided with an LMP3 car and the Porsche was left stranded with broken suspension. The Safety Car was deployed to allow the Ebimotors Porsche to be moved to safety.

At the restart the No. 77 Porsche was nearly a lap ahead of the chasing No. 66 JMW Motorsport Ferrari of Alex MacDowall and the No. 88 Proton Porsche of Gianluca Roda.

In LMP3 the No. 13 Inter Europol Competition Ligier of Martin Hippe was out in front, with the No. 7 Ecurie Ecosse/ Nielsen Ligier of Colin Noble 15 seconds up the road. The German kept his cool and maintained the gap with Noble keeping the No. 2 United Autosports Ligier of 2017 champion John Falb behind him. The No. 3 United Autosports Ligier of Tony Wells was ahead of the championship rival Rob Garofall in the No. 15 RLR MSport Ligier but a drive through penalty for Wells for exceeding Full Course Yellow speeds put the destination of the 2018 titles beyond doubt.

Back at the front an the No. 22 United Autosports Ligier of Filipe Albuquerque, the No. 26 G Drive Racing Oreca of Jean-Eric Vergne, the No. 32 United Autosports Ligier of Will Owen and the No. 23 Panis Barthez Competition Ligier of Will Owen were separated by just 2.5 seconds with an hour to go. Vergne passed Albuquerque for the lead after several attempts but ran wide on the exit of the corner. The French driver was judged to have gained an advantage by exceeding track limits and the No. 26 Oreca had to add 10 seconds to its race time at the checkered flag.

Vergne handed the car over to Andrea Pizzitola to finish the race. After the final round of pitstops Albuquerque was leading by three seconds from Stevens, with Pizzitola holding a five second advantage over Owen. The racing was edge of the seat stuff and the teams held their breath as the clock counted down to zero and the checkered flag was waved.

Filipe Albuquerque took a home victory in the No. 22 United Autosports Ligier, just 0.520 seconds ahead of Will Stevens’ No. 23 Panis Barthez Competition Ligier. Andrea Pizzitola finished third, 4.6 seconds behind Stevens but, crucially, 9.462s in front of the No. 32 United Autosports Ligier of Will Owen. When the 10 second penalty was applied the No. 32 Ligier moved up to the final podium spot ahead of the No. 26 Oreca.