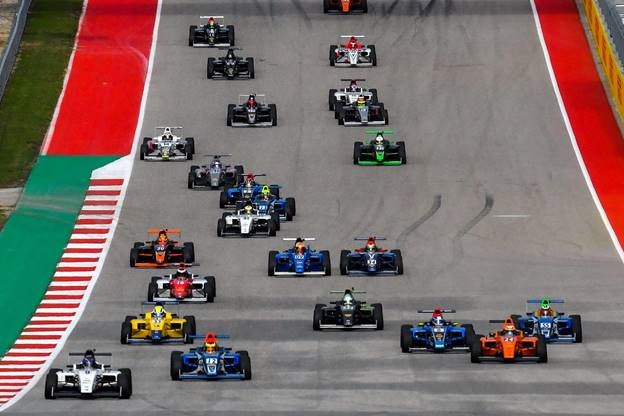 Thirty-three Formula 4 United States Championship Powered by Honda drivers staggered across the front straight of the legendary Circuit of the Americas in front of thousands of fans, competing on the same world stage as their Formula 1 heroes serving as the support race for the United States Grand Prix Oct. 19-21. Dakota Dickerson of San Diego and Christian Rasmussen of Copenhagen, Denmark, claimed victories in the final rounds of 2018 in what would be the closest, wheel-to-wheel action-packed races of the season.

“In terms of action, Saturday was on of the best F4 races of the season," said 2018 F4 U.S. Champion Dickerson. “The atmosphere here at COTA is great and seeing thousands of fans gathered to watch us race, just adds to the whole experience."

On Saturday, Rasmussen charged his way into second while James Raven of Portsmouth, England, took third. In the season finale, Joshua Car of Sydney, Australia, edged into second followed by Kory Enders of Sugar Land, Texas, rounding out the podium.

Limited track time due to the profile of the evet left the F4 U.S. field with one shortened practice and one less race to contest for points. A very soggy qualifying ended under red-flag conditions with Dickerson laying down a fast-time nearly two seconds quicker than the closest competitor, claiming the Cameron Das Fast Qualifier Award and pole for the opening COTA round.

Starting in the best position of his F4 U.S. career, Enders represented the Lone Star sharing the front row with Dickerson. Series-newcomer and Formula Pro USA champion Scott Huffaker of Menlo Park, California, and Rasmussen lined up Row 2 and Benjamin Pedersen of Copenhagen, Denmark, and Car completed the third row for the F1-style standing start.

Quick off the drop of the green flag, Dickerson defended his first position into Turn 1 with Enders sending it to the outside. Dickerson closed in on his race line, and immediately started to pull a gap from Enders. Barreling into Turn 1 on the outside with a group of Ligier JS F4 machines, Rasmussen was forced wide off track into the curbing. His car went airborne, landing hard back onto the 3.427-circuit. Rasmussen regained control of his No. 6 Jay Howard Driver Development car, but lost valuable field position, shuffling out of the top-10.

“I came down pretty hard where it hurt my feet a bit," said Rasmussen. “Once I knew there was nothing serious wrong with the car, I had to recover, and that’s where I redshifted my focus. We made up seven positions before the yellow came out, which really helped me since it grouped the cars back up."

An unavoidable collision on the outside of 19 between Crosslink/Kiwi Motorsport teammates Jose Blanco of San Juan, Puerto Rico, and Aske Nygaard Bramming of Copenhagen, Denmark, brought out a full-course yellow, grouping up the cars for a restart.

Charging off the restart, Enders and Raven, who started eighth, caught Dickerson off-guard for the pass. The trio went three-wide into Turns 1-4 with Raven on the inside, Enders on the outside and Dickerson sandwiched in the middle. Dickerson got the switch-back, squeezing ahead into first. Meanwhile, the fight at the front allowed, Rasmussen to close into fourth.

On the final lap, Enders, who had been in podium position all race, went deep into Turn 12, falling out of contention and barely escaped contact. The misstep allowed Rasmussen to maneuver into second on the back straight, leaving little time for Raven to regain position.

“I was frustrated at the last lap, really," Raven said. “It was annoying to be in second and then get overtaken on a straight. At that point there was no defending because of time. I had to think strategically, focus on holding off Kory and not making mistakes to make the situation worse. I wanted to represent my team and country on that podium."

Dickerson held off Rasmussen to claim his fourth win of the season. Attacking from P11, Rasmussen finished less than a half a second behind Dickerson for second. Raven crossed the stripe in a close third, followed by Enders in fourth, Pedersen in fifth and Huffaker in sixth. In an astounding drive from behind after getting sent to the back of the 33-car field from a false start, Car charged his way back into the top-10 to finish seventh. Kent Vaccaro of Plattsburgh, New York, Conrad Clark of Taupo, New Zealand, and Teddy Wilson of Holbeach, England, completed the top-10.

“Winning after a battle like that is so exhilarating and satisfying," said Dickerson. “Being able to end the day with a win is exciting for the whole team."

In the season finale on Sunday, Dickerson, who set fast-lap in Saturday’s round, started on pole with Raven, Enders, Pedersen, Rasmussen and Car filed in behind the DC Autosport with Cape Motorsports pilot.

As the lights went out, Dickerson and Pedersen launched off the line. Enders fell back to seventh and was unable to challenge for position after a full-course yellow was thrown in the first lap.

After incidental contact caused Alex Mayer of Harleysville, Pennsylvania, to spin, Chandler Horton of Zionsville, Indiana, darted wide to avoid hitting Mayer’s rotating car. With no where to go, Jack William Miller of Westfield, Indiana, smashed into the side of Horton. The red, white and blue chassis of William was extracted from the top of Horton’s Gas Monkey Energy Drink machine. All drivers involved were uninjured, however, they would not return to finish the race.

On the restart, Dickerson held off Raven but half-way through the lap, Dickerson lost speed at an exponential rate, eventually pulling in to the pits with brake failure. After setting two fast laps and winning the debut USGP round, Dickerson’s chance at a weekend sweep ended, and he spent the rest of the race spectating from the pits.

Rasmussen seized his fifth checkered of the season, the most of any F4 U.S. competitor in 2018, and the win boosted the Danish rookie in the season-long points battle to claim third overall.

“It is such a huge experience for me to win such a big race in front of all the F1 teams and the large amount of fans here," Rasmussen said. “Driving around the track to see all the Danish flags around the grandstands for sure made the experience even better. Thank you to everyone who made the trip all the way from Denmark to watch me race. I am glad we put on a good show for you guys."

After an amazing comeback on Saturday and driving from a fifth-place start on Sunday, Car crossed the finish line in second.

“This was such a wonderful experience to race at the U.S. Grand Prix and stand on the F1 podium as well to end the F4 U.S. season," said Car. “We came away with fourth in the overall championship out of 55 drivers, and also took away five cheeky Super License points, which is outstanding for our rookie season. I couldn’t have done this without the continued support from my family, friends and sponsors."

In another great recovery, Blanco finished the race in fourth after a horrific crash in Race 1. From a drive from 14th, Wyatt Brichacek of Johnstown, Colorado, finished fifth followed by Raven in sixth. Oliver Clarke from King’s Lynn, England, who started 16th, took seventh, and charging from 20th position Bramming finished the finale in eighth. Vaccaro and Francisco “KiKo" Porto of Sou Paulo, Brazil, rounded out the top-10.

Sabre Cook was awarded the Sabelt Hard Charger Award for making 25 progressive passes in the weekend. After not completing a qualifying lap, Cook was forced to start Race 1 from the tail of the 33-car grid, she put her experience to good use, advancing 14 positions to end the race in 19th. With times from race one setting the grid for race two, the Colorado-native was unable to get a clear lap to greatly improve her starting position and started Sunday’s race from Row 13. Starting race two from 26th, Cook had another double-digit passing effort as she continued to show her prowess, gaining 11 positions and closing her weekend and season with a 15th place result.

While Dickerson clinched the national championship before the weekend finale, second and third place were not decided until the checkered flag dropped in the final round on Sunday. Raven won the F4 U.S. Vice-Championship title and Rasmussen swooped in to claim third in the national points championship. The top-seven drivers (Dickerson, Raven, Rasmussen, Car, Pedersen, Pedersen and Blanco) are presented with FIA Super License points to aid in their racing career advancement to Formula 1. F4 U.S. Championship is one of the only junior racing series in the United States to offer its competitors Super License points.

The fourth season of the F4 U.S. Championship will kick-off in the spring of 2019. The full schedule will be announced at the PRI Show in December. For photos, full results and information on F4, visit F4USChampionship.com.