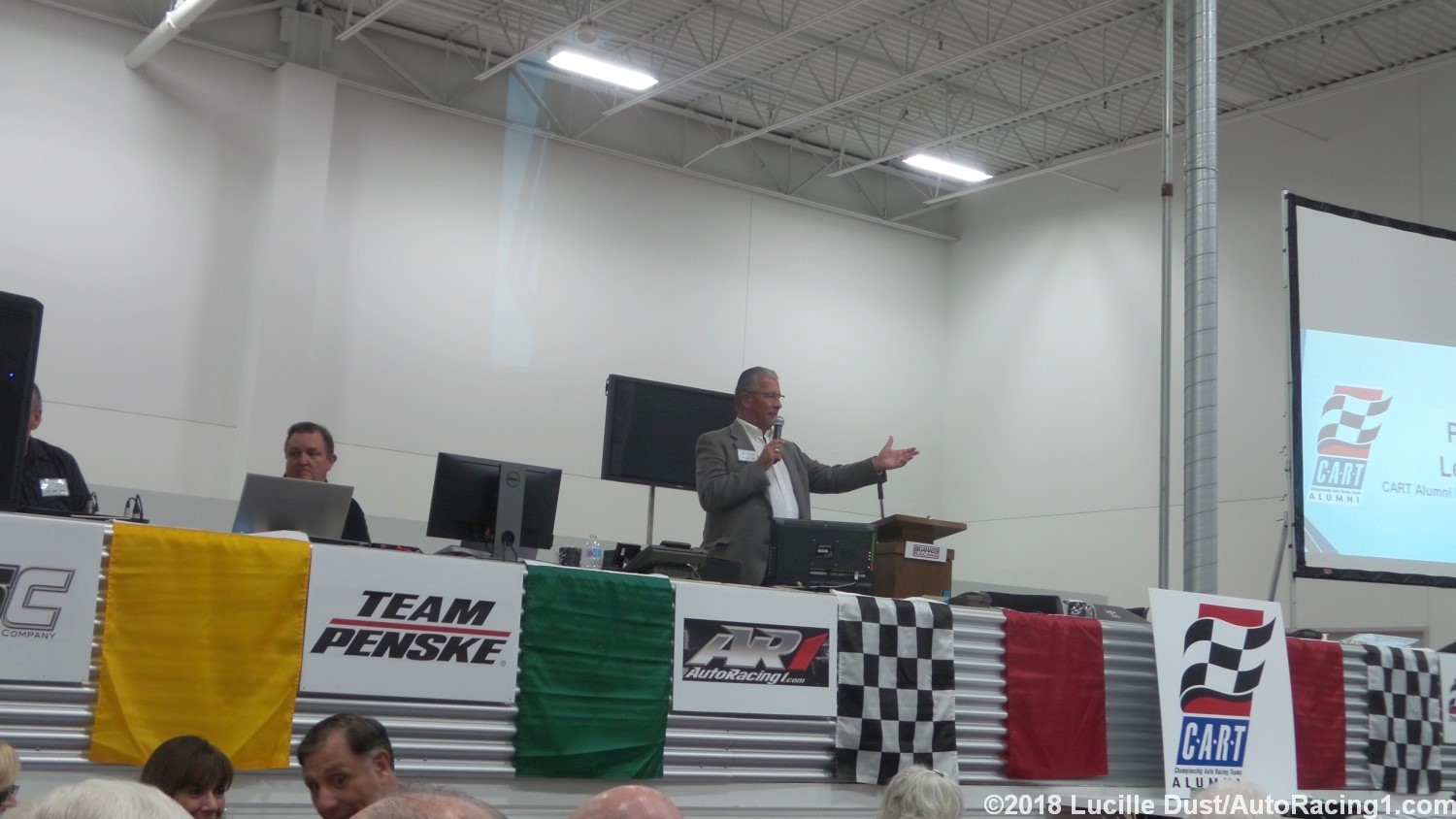 The 2018 CART Reunion was the place to be in Indianapolis this weekend. Meeting up with all the former CART officials, sponsors, workers and anyone that worked in the series proved to be a fun time. The racing family enjoyed the many functions that were scheduled for Friday and Saturday.

Friday night was the registration at Sarah Fisher's 1911 Grill, which is attached to her Speedway Indoor Karting. Alumni were greeted by the reunion committee and mingled in the bar area before sitting down to dinner at the Grill. The food was great and the menu has quite a selection. You can find healthy alternatives and also generous steaks and pizza. Although Ms. Fisher was not able to greet us, Al Unser. Jr, was on hand to talk and reminisce about the CART days.

A special tour was given by Dallara to any attendee that wanted to see the factory in Speedway. There was also a special IMS Museum rate but the Red Bull Air Race was at the track this weekend, making that option not as affordable because you needed a ticket for the event in order to gain access to the track.

The final function was the Saturday night dinner which was held at the Ganassi Racing shop. Some of the Alumni had never been to a race shop before and were amazed at the collection of trophies Chip Ganassi has displayed in the lobby of his building. The latest being the 2108 IndyCar Championship with Scott Dixon.

Staff of Ganassi Racing were on hand to explain the various areas in the shop as attendees were able to view the assembly room, the paint booth, the storage areas for wings and body parts. The bays were the cars are worked on when in the shop, was the area the tables were setup for us to eat and mingle.

No explanation was needed to explain the truck bay, which was where many of Ganassi's winning cars were mounted to the wall in racks, going back to Alex Zanardi, Jimmy Vasser and Juan Pablo Montoya. Ganassi has won 12 open wheel championships and four Indy 500s. There is also a NASCAR arm to Ganassi, which has won the Daytona 500 and the Brickyard 400. Their class victory in 2018 at the 24 Hours of Daytona marked the teams 200th win in all professional motorsports.

A warm welcome by the committee President, Paul Leyton, started the evening program. A couple of distinguished guest were recognized, including the infamous Roger Bailey, who ran the Indy Lights program, and Gordon Kirby, who has covered the IndyCar series for several decades.

Wally Dallenbach, Sr. was the first speaker of the evening. Dallenbach drove an Indycar from 1965 through 1979, winning five times. He joined CART in 1980 as the competition director. In 1981, he became the Chief Steward of IndyCar, a position he held until 2004. Dallenbach is known for improving the safety program and for establishing nondenominational church services for the drivers and their families. The man best known by the hat he always wore, reminisced about how he meet his lovely wife and the good times back in the CART days.

Andrew Craig, founder of The Craig Company LLC, which has sponsored all three CART reunions, was the next speaker. Craig was the CEO of IndyCar from 1994 to 2000. Craig commented, "The one thing that made my job easy in the CART days, was I never had to worry about the day to day operation at the race track because you all showed up and did your job. You made it happen. And I thank you all."

Jim McGee, a member of the CART family from 1965 to 2006, worked for various teams in the CART days. McGee has 90 wins, four Indy 500 wins and nine championship during those years. McGee addressed the attendees, "I am really grateful to see all the people that are here tonight that were so involved in CART. You know the old saying, it is better to be seen than to be viewed. My thanks to Mike Hull and Chip for hosting this event tonight at their shop. I talk with Mr. Pat Patrick and he sends his best wishes. It is great to see everyone tonight."

Gordon Kirby, an excelled writer who covered all but ten CART races from 1979-2003, also was a speaker. Kirby has authored several books about CART drivers and topics of racing interest. There was a book signing before dinner for two of his books, Jim McGee: Crew Chief of Champions and Wally Dallenbach: A Steward of the Sport.

The buffet dinner was catered by Dawson's, which is located in downtown Speedway. The remainder of the evening was spent enjoying a meal with former co workers and old friends.

AR1 was also one of the sponsors for the reunion, giving you exclusive coverage of the fun events that took many hours of hard work. Thanks to the reunion committee for a great two days and more memories.