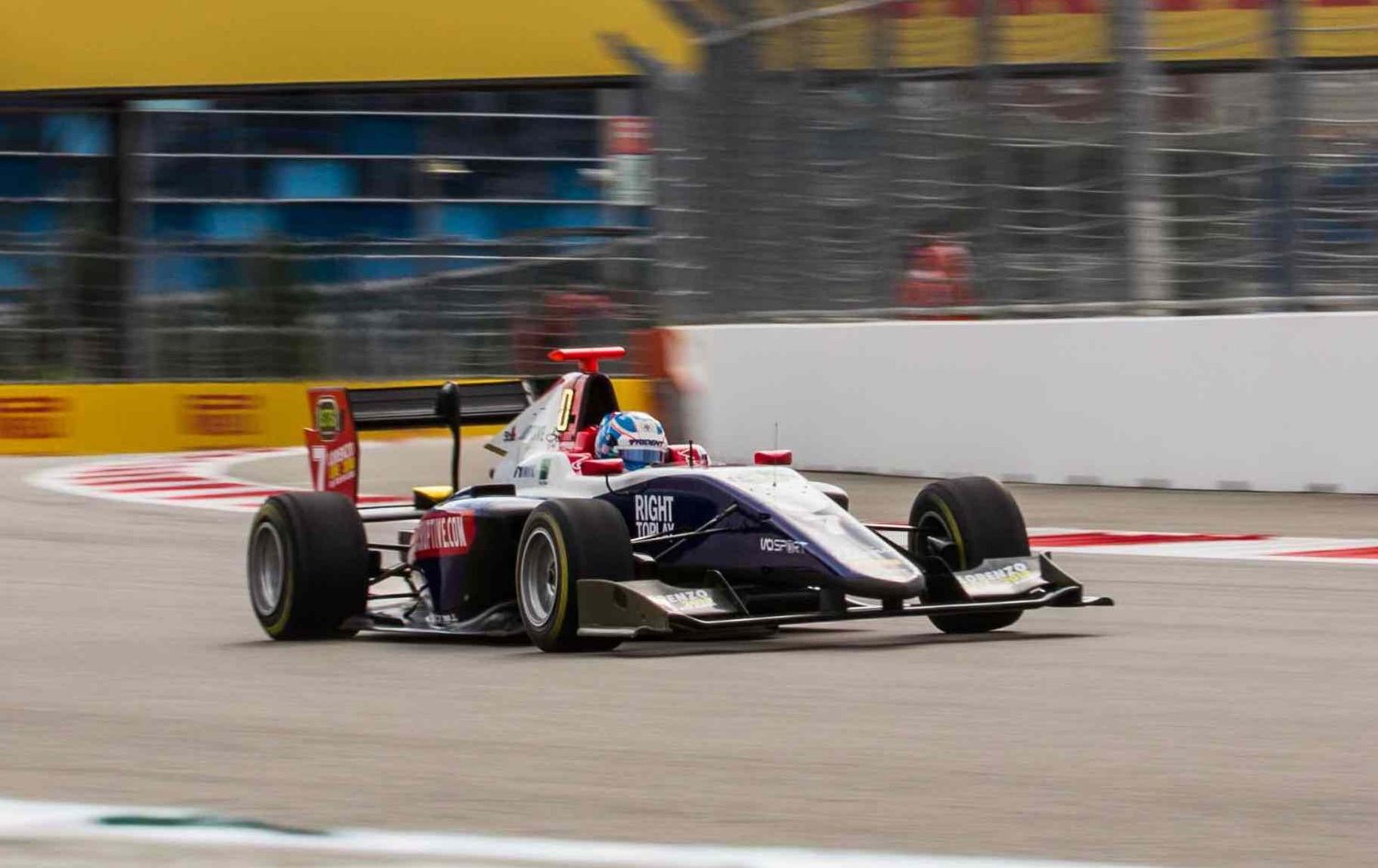 The GP3 series doesn’t bestow a “hard-charger award," but if it did, America’s Ryan Tveter would be a shoo-in after the second half of the series’ doubleheader at the Sochi Autodrom last Sunday. The Oyster Bay, N.Y.-based driver bettered his starting position by a whopping nine positions, as he started 18th and finished ninth.

With dark clouds looming over the 5.848-kilometer, 18-turn road course on Sunday morning, Tveter passed Devlin DeFrancesco and Sacha Fenestraz on the first lap of the 15-lap race. Up ahead, Simo Laaksonen and Giuliano Alesi fell back, with Alesi’s car suffering a flat tire after contact with Jake Hughes. Hughes had to pit to get a new nose for his car and Tveter passed one of his teammates, Pedro Piquet, to rise to 12th by the end of lap three.

He remained in 12th for the next four laps. His Trident No. 7, which carries the colors of The Disruptive, Stilo, and his charity partners — Right To Play, MTV Staying Alive, and the Lessons for Life Foundation — was running quicker lap times at that point than the four cars ahead of it, but catching and passing those cars proved difficult. But Tveter kept focused, and moved into 11th on lap seven by passing Diego Menchaca, setting his fastest lap to that point on the same lap.

There was quite a gap to the next driver on his radar screen, however, which was Jannes Fittje, who had started 12th. Tveter methodically cut that gap. He got another position to move into tenth on lap 13 when Nikita Mazepin, who had been fourth, plowed into a tire barrier off Turn 13. Mazepin got out of his damaged car under his own power, but his crash brought out the event’s sole caution flag, setting up a one-lap shootout for the restart on lap 14.

Tveter was ready. He successfully passed Fittje on the last lap to rise to ninth in the final rundown, setting his fastest lap of the race in the process with a 1:55.659.

Unfortunately he was involved in an accident early in Saturday’s 20-lap race and dropped to 15th. Mazepin tapped him early, and then Laaksonen lost control of his car and sent Tveter airborne briefly.

He tried to deal with his damaged car and had good battles with Gabriel Aubry, Tatiana Calderon and Pedro Piquet, rising as high as 13th. But the damage was done and he finally had to bring his car into the pits on lap 19 for an 18th-place finish and subsequently the 18th starting spot for Sunday’s race.

Although he was just out of the points in Russia, Tveter showed great pace and determination. He is in ninth place in the championship heading into the season finale No. 23-25 at Yas Marina in the United Arab Emirates. Tveter recorded a second-place finish in the GP3 season finale there last year.

“Sochi was shaping up to be a great weekend," Tveter said. “It was a new track for me, but we were on the pace from the beginning and came very close to pole with the fifth-fastest time in my first-ever ‘twilight’ qualifying. We ended the session in the dark, two-tenths off the pole, with the fastest middle-sector time. I felt confident we’d have a good chance for the victory or at least the podium in Race 1.

“Unfortunately everything unraveled in the first corner when I was hit and knocked 10 places back to 15th and had to retire on the final lap. Tire degradation was a major issue in Race 1, and again it seemed like some drivers were racing on a different circuit.

“Race 2 was a good comeback, but starting from the back I ran out of laps at the end and finished just outside the points in P9. Still I was happy to make up nine positions in Sunday’s sprint race.

“I really enjoyed driving the Sochi circuit and found everyone in Russia very welcoming and helpful. Things mostly outside our control hampered our results. We have a long break now before the last round in Abu Dhabi. We know we have a strong car. Hopefully our fortunes will shift and it will be a strong finish to the season."