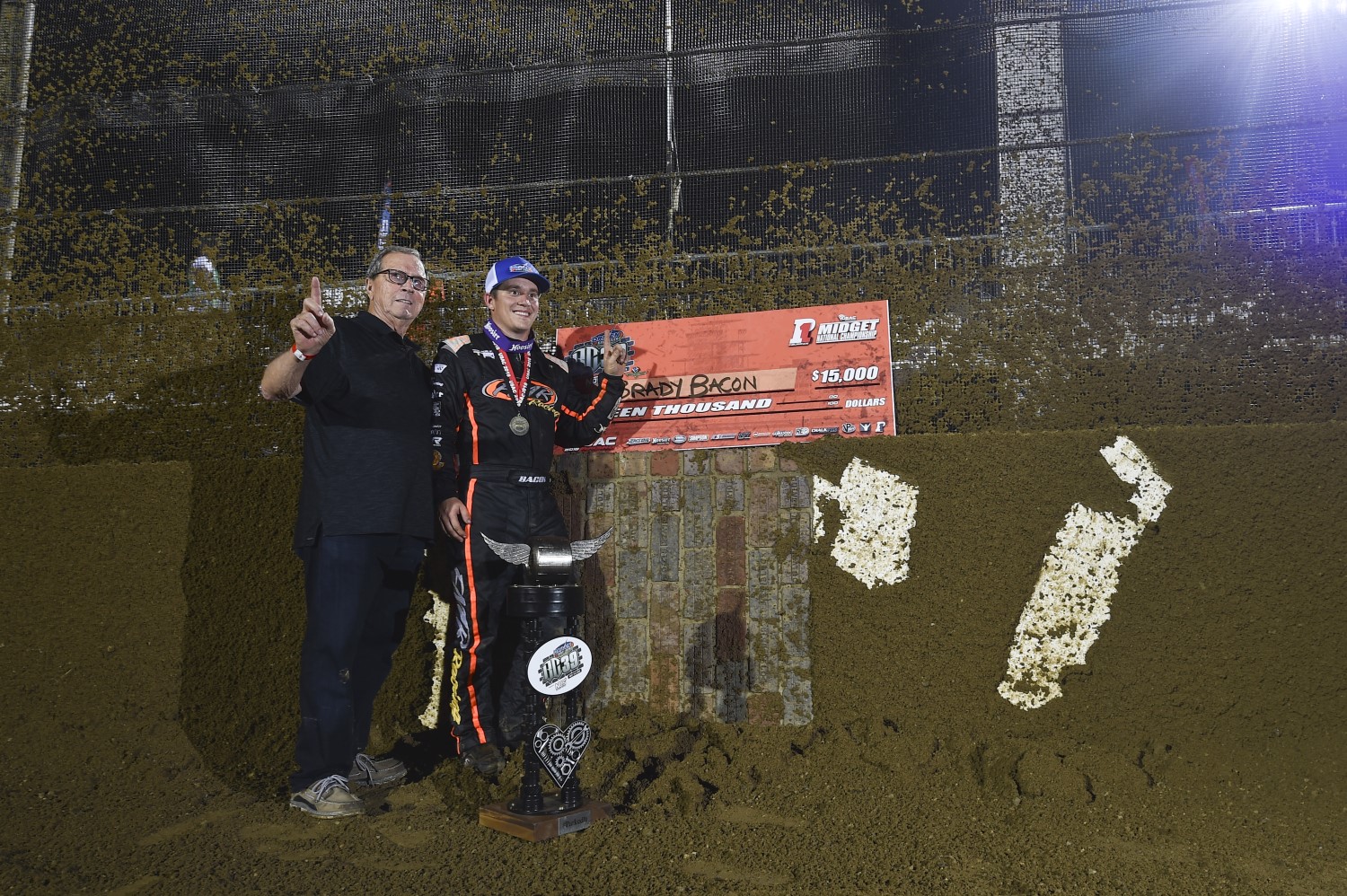 Brady Bacon passed pole sitter Kevin Thomas with seven laps to go and hung on to win the inaugural Driven2SaveLives BC39 presented by NOS Energy Drink on Thursday night at The Dirt Track at IMS.

Bacon, from Broken Arrow, Oklahoma, earned $15,000 for the win in the 39-lap USAC P1 Insurance National Midget Championship A-Main feature in the No. 76M car fielded by FMR Racing. It was the first USAC Midget victory of the season for Bacon, 28, a two-time USAC Sprint Car National Champion.

Afternoon rain forced a four-hour delay before heat races could start during the first-ever event on the new quarter-mile clay oval inside Turn 3 of the famed IMS asphalt oval. A capacity crowd, which included retired NASCAR superstar Dale Earnhardt Jr. and Cup Series standout Ryan Blaney, witnessed history as Bacon added his name to a list of inaugural featured race winners at IMS.

"This team stepped up for the big race and the big money," Bacon said. "I want to thank everyone who made this happen, all the hard work today just to make the race happen with Mother Nature getting involved. It turned out to be a great race. I know I was holding my breath there for a few laps."

Thomas led the first 32 laps in the No. 63 car fielded by Joe Dooling. Bacon started seventh but climbed to second just before a six-car pileup in Turn 4 triggered a caution with 28 laps to go. Boat had jumped to fourth, behind Courtney, by that point after starting 10th.

The top four remained static during caution periods with 25 laps remaining and 23 laps remaining. With 19 laps remaining, Boat passed Courtney for third as the race stayed caution-free until the end.

Thomas, Bacon and Boat then reached a dense thicket of traffic with 13 laps to go, but Thomas stayed out front despite multiple attempts by Bacon to take the lead on the fast, tacky track, which featured a wide cushion of dirt on the high line.

Bacon made his decisive move in Turn 4 with seven laps remaining, passing Thomas for the lead with a powerful move in the low groove. Boat jumped to second one lap later and set his sights on Bacon but never pulled even with the "Macho Man" over the last five laps.

"We've been usually the best guy on the bottom, and the track was really tricky with the cushion being so big from the rain. That's kind of what we gambled on. We wanted to really get a lot of acceleration off the bottom and really stick it in sideways like that. They gave me a perfect race car."

Said Boat: "They gave me a great car. You want to win at the Speedway, so second kind of stings right now. But what a good car."

Robert Dalby, from Anaheim, California, was transported to IU Health Methodist Hospital in Indianapolis with non-life-threatening injuries after his No. 4D flipped into the air and rolled end over end after landing in an incident in the fourth qualifying race. Dalby was awake and alert