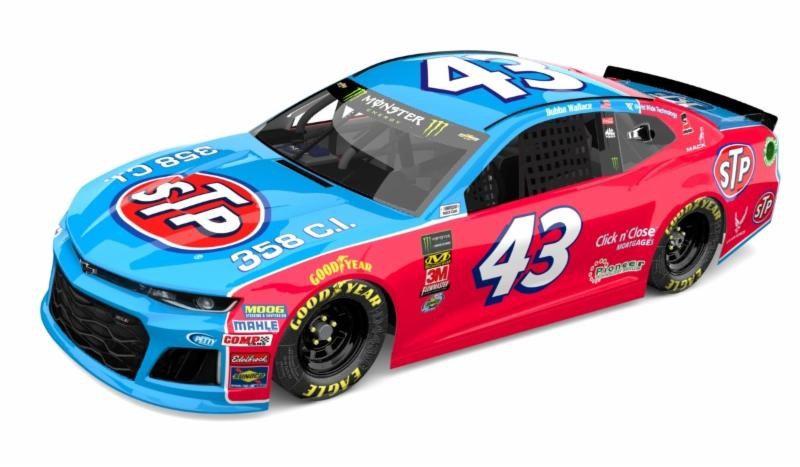 Taking a page from its own history book, Richard Petty and STP once again reached an agreement to place the STP day glo red on the Petty blue No. 43 for today's running of the Bojangles' Southern 500 at the Darlington Raceway. The agreement is to celebrate the longest and most famous paint scheme in the history of NASCAR, and to also relive the story of how this iconic paint scheme came to be. The car was transformed this morning after approval from NASCAR.

Since the time Hall of Fame driver and crew chief, "The King" Richard Petty and Dale Inman, created the famous Petty blue color, the No. 43 machine raced primarily in that shade of blue through the 1960s. In the beginning of 1972, STP became Petty's first major sponsor, and thus serious discussions about the new look of the famed 43 began. Petty was insistent of the Petty Blue while STP boss Andy Granatelli insisted on the Day-Glo STP red.

"I remember it was the middle of January, the week leading into Riverside, our first race. Myself, Dale (Inman) and Chief (Maurice Petty) flew to Chicago to meet with Granatelli," said Petty. "Andy and I had spoke on the phone, and we were all meeting to put the sponsorship together. It was something not only new to us, but really new for the sport, especially at this scale of sponsorship."

"We went in and had the meeting," continued Petty. "They (STP) laid out the terms, the money, and everything else. It was great as far as we were concerned, until we got to the color of the car. Andy wanted the day glo red and I wanted to keep the Petty blue. Well, a snowstorm hit us in Chicago, but we still had to race at Riverside."

"Dale and Maurice left and flew to California through Denver," reflected Petty. "Andy wanted me to stay the night and work things out. We finally get to California with Andy and go to the hotel in Los Angeles (Sheraton-West Hotel) to do the press conference to announce the deal. For Riverside, we didn't have a lot of time, but we placed the STP decals on the hood and quarter panels. We still had the base Petty blue, like you saw Friday and Saturday here this weekend."

The sponsorship was for $250,000 in sponsorship dollars, by far the largest any NASCAR team or driver had seen at the time. Granatelli famously sent the contract to Petty Enterprises in Level Cross, North Carolina before the next race at the Daytona 500. The contract stated that the famed No. 43 was to be day glo red, with Granatelli offering Petty an additional $50,000 to do so. Petty, as he still does when needed today, crossed out the provision in the agreement and sent back to Granatelli.

However, the discussion didn't end after Riverside, Petty and Granatelli spent more time in Chicago and finally agreed on the now famous Petty blue and day glo red that debuted in the '72 Daytona 500. The scheme will again race today with Bubba Wallace behind the wheel.

"You can probably make a short movie out of what happened between the beginning of 1972 up to the Daytona 500 around this sponsorship," said Wallace Jr. "It's amazing to think that 'The King' would potentially walk away from such a big sponsorship over the color, but looking at how things worked out, it's now the sport's most iconic scheme."

The STP and Petty relationship has sustained 47 years, with only a few years between when STP was not on the famed No. 43. The company has also kept a working relationship with Petty since the first agreement. Through inflation, the sponsorship of that first deal would now be worth $1.5 million. The Petty and STP combination won four NASCAR championships and four Daytona 500's.

"This is an incredible story to relive," said Katina Wall, Marketing Director for STP. "The Southern 500 throwback weekend allows us to do something fun with our partnership. We're fortunate enough to have this unique relationship with the Petty's, to be one of the few partners who have such a rich history together. We're honored to tell this amazing story of our longstanding relationship with the Petty organization. We look forward to today's race and Bubba Wallace carrying on the legacy."

The Southern 500 at the Darlington Raceway will be televised live on NBC Sports Network at 6:00 p.m. ET and broadcast on the Motor Racing Network and SIRIUS/XM NASCAR radio.