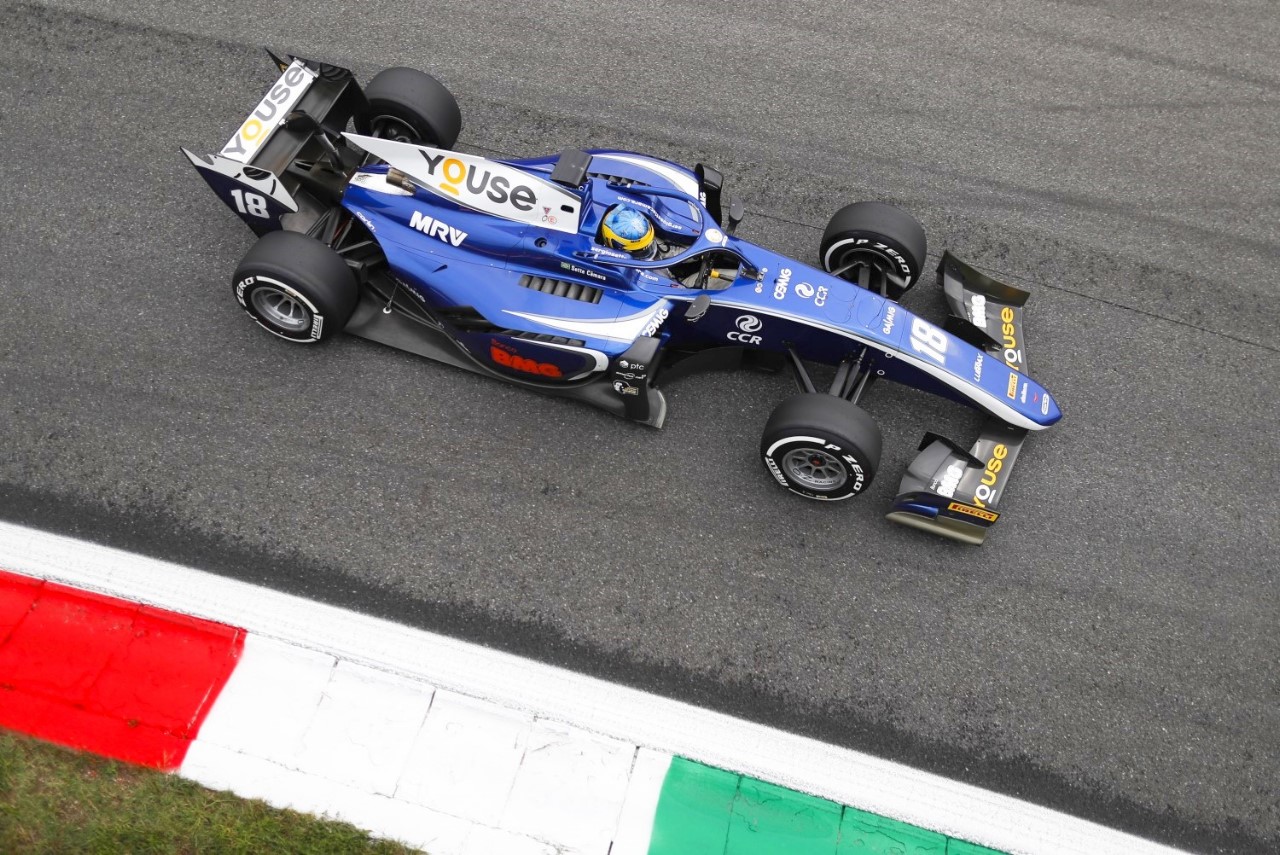 Sergio Sette Camara secured the fastest time in the FIA Formula 2 Championship Free Practice session at Monza, Italy, clocking in a 1:33.810 during the final stages as the wet circuit began to dry over the course of the allotted running. The Carlin driver beat RUSSIAN TIME’s Artem Markelov to the top of the timesheets by 0.048s, as the Russian driver brought out a yellow flag at the end of the session. DAMS’ Alexander Albon completed practice in third place.

Following heavy downpours earlier in the day, the session began under wet track conditions, and home hero Luca Ghiotto was first on the road with a set of wet tires – accosted by BWT Arden pairing Maximilian GÃ¼nther and Nirei Fukuzumi. After the first exploratory laps, a dry line showed signs of appearing as Sean Gelael set the first timed lap in the 1m45s before Markelov shunted him off of top spot.

Markelov’s teammate Tadasuke Makino was first to try a lap on the medium-compound slicks, leading a series of reconnaissance efforts as the field looked to make a switch to the dry tire. Eventually, Louis Deletraz and Arjun Maini decided to bite the bullet and commenced a series of timed laps on slicks – Deletraz dipping below the 1m40s to beat Markelov’s benchmark by over four seconds, then hacking a further two seconds out of his time.

Makino and MP Motorsport’s Dorian Boccolacci then emerged on the road, and the Frenchman elevated himself into first with a 1:36.781 before the Japanese ace went a second and a half faster. Boccolacci then returned to the top, but was quickly displaced by Lando Norris until Ghiotto beat the British driver – who had participated in Formula 1’s morning practice session for McLaren – by fractions of a second.

Returning to the top, Markelov beat Ghiotto by 0.03s and was then able to extend his advantage by almost a second as the circuit continued to improve with the increased running. However, he was beaten to the punch by Sergio Sette Camara, who found a smidgen of time over his rival to clinch control of the session. Any hopes of further improvement throughout the session were ended by Markelov, who spun at the first chicane and became beached on the sausage curb, bringing out a yellow flag at the opening sector.

Albon fired his way up to third before the checkered flag, beating Makino’s time while Ghiotto was fifth in front of his home crowd. The Campos Vexatec Racing driver’s compatriot Antonio Fuoco was sixth, while championship leader George Russell claimed the seventh best time ahead of Maini. Norris and Boccolacci completed the top 10 runners.