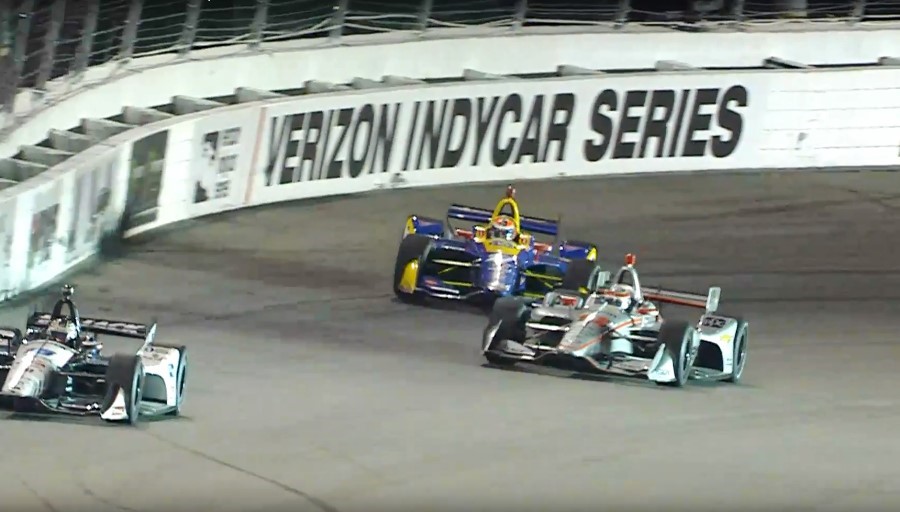 Alexander Rossi had a couple of big “saves" on Saturday night at Gateway Motorsports Park just outside St. Louis. He came home second in the Bommarito Automotive Group 500 to pick up his eighth podium finish of the season. The No. 27 NAPA AUTO PARTS Andretti Honda drove across the finish line just 1.3117 seconds behind Team Penske’s Will Power.

Rossi ran up front most of the night, with Scott Dixon leading 145 of the 248-lap race. Power passed Dixon for the lead on lap 150 and was strong the remainder of the race. But things got interesting when the yellow came out on lap 173 for Rossi’s Andretti Autosport teammate Ryan Hunter-Reay, who had a mechanical issue that caused him to slow on the backstretch.

A flurry of cars came to the pits, with the leaders hoping to eliminate a final pit stop and run to the end. A few laps after the race went green, Power and Dixon bailed out of the attempt, and Rossi was the lone driver in fuel-saving mode.

Both Power and Dixon had to make final pit stops for a splash of fuel. While Power’s seven-second gap allowed him to eventually regain the lead after pitting, Dixon came out behind Rossi and was unsuccessful in chasing him down before the checkered flag. Rossi ran the final 71 laps on one tank of Sunoco fuel.

"It's a mental game because you're trying to obviously hit a fuel (mileage) number to go X amount of laps, and it was a very, very big fuel number," said Rossi. "Unlike the (Indy) 500 in 2016, I didn't have a teammate to tote me around, so I had to figure out how to do it myself, which was a big challenge.

"But huge hats off to (strategist) Rob Edwards and the whole (No.) 27 NAPA Andretti team for coming up with it and keeping the faith that I could manage it. It was just enough at the end. Obviously, you want to win the race, but the goal really is to beat Scott (Dixon) and we were able to do that, despite it only being a couple-point swing."

With his third straight podium finish following a pair of wins, Rossi maintained second in the championship and crept within 26 points of Dixon with just two races remaining. The four-time series champion has seen his lead shrink from 62 to 26 points over the past three races despite finishing in the top five each time.

"Every weekend we just have to try and beat Scott," said Rossi. "Will was amazing today, so congrats to him. I'm a little lost for words. I'm not sure how we made that happen today, that's unbelievable. I wasn't full throttle at all for the last 70 laps."

"I don't know that we had enough for Will, even if it was a flat-out race to the finish. But the important thing is we beat Scott and closed the (points) gap a little bit."

Rossi’s other impressive “save" came on lap 146 while running side-by-side with Power. Coming off Turn 2, he was hanging high on the outside when the car snapped sideways. Rossi made a crowd-pleasing save and avoided slapping the wall.

“I said a lot of bad words," Rossi replied when asked what he was thinking. “It was one of those ones where I’d pretty much given up and it came back by the grace of God. I was on the brakes and ready to hit wall. So, it just kind of corrected itself."