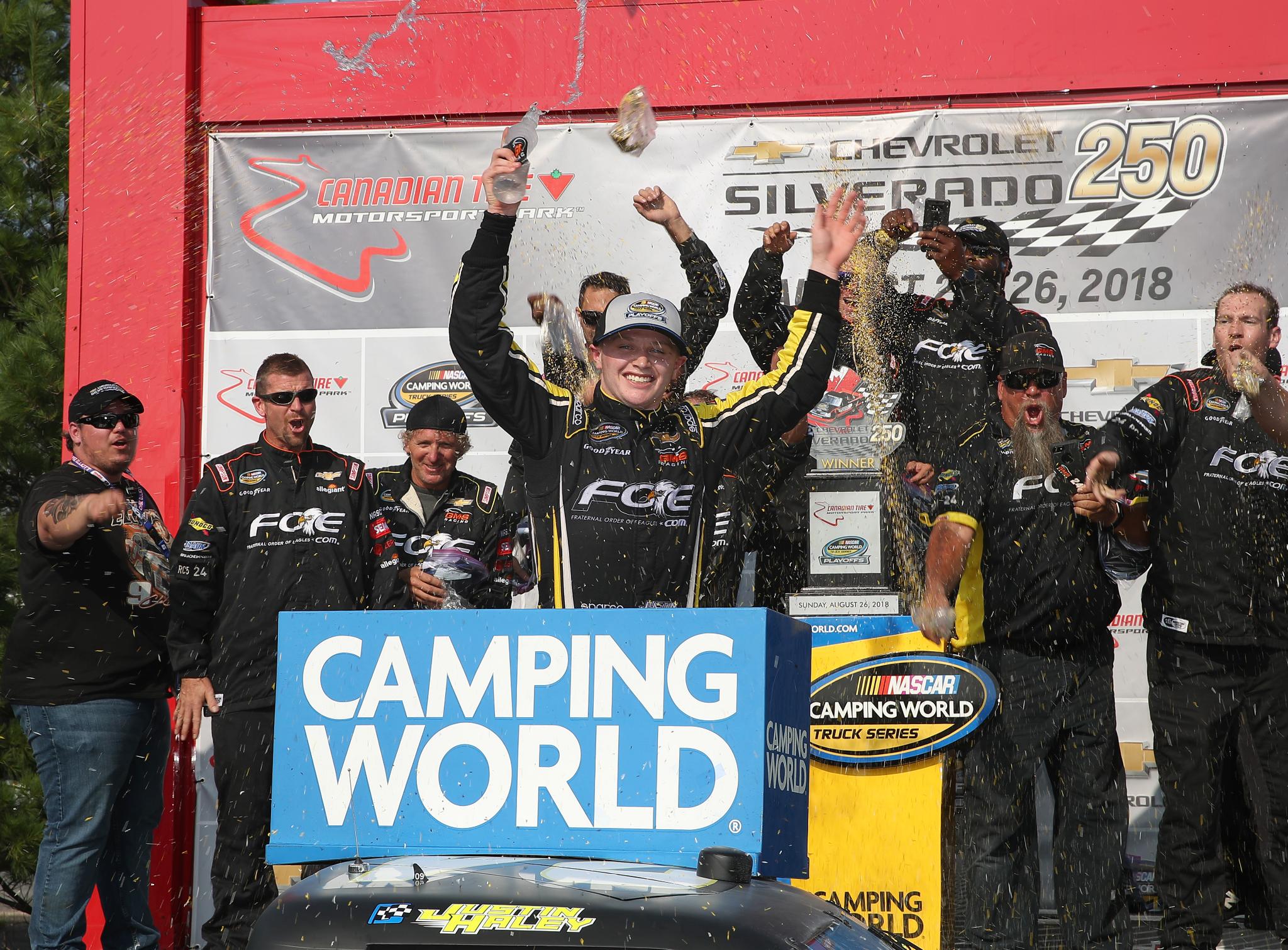 The NASCAR Camping World Truck Series made the annual trip to Canada to open up their 2018 Playoffs at Canadian Tire Motorsport Park.

Despite missing the 2018 Playoffs, Todd Gilliland seemed almost destined to win his first career truck series race Sunday at CTMP. Taking the lead on Lap 53 from Johnny Sauter, it was smooth sailing for Gilliland, until a late race caution set up a thrilling NASCAR Overtime battle with his Kyle Busch Motorsports teammate and Playoff driver Noah Gragson. Gragson, who won both previous stages, dove to pass Gilliland in the final turn.

In similar shades to the move made by Chase Elliott in the 2013 race, the contact sent both Gragson and Gilliland spinning. The two trucks blocked the racetrack, causing a massive pile up coming to the checkered flag. The ensuing carnage allowed fellow Playoff driver Justin Haley to sneak through the wreckage and win the Chevrolet Silverado 250.

The 19-year-old driver from Winamac, Indiana lead only a single lap all race long and it proved to be the most important one. With this victory, Haley claims his second checkered flag of the 2018 season.

"We were just in the right place at the right time" said Haley celebrating in Victory Lane. "I can’t thank everyone at GMS Racing enough; it was a truly blessed day."

A visibly dejected Gilliland expressed his anger towards his Kyle Busch Motorsports teammate following the contact in Turn 10.

"I should have never let him get to me," Gilliland said. "We should have given him the inside. We had the fastest truck and we didn’t win again."

Gragson took immediate responsibility for the contact in the final corner, apologizing profusely to his teammate.

"I apologize to Todd, the No. 4 team and everyone at KBM. I was expecting a little more room on the bottom and we made contact. Again I want to apologize to everyone on that 4 team, that was on me."

Following the intense finish at Canadian Tire Motorsport Park, Haley locks himself into the Round of 6 continuing his hunt for the 2018 NASCAR Camping Truck Series championship. The Round of 6 begins October 27 at Martinsville Speedway.

"This is what we came to do," Haley added. "This is road course racing and now we are really looking forward to Vegas. Mission accomplished."

The NASCAR Camping World Truck Series returns to action Friday, September 14 for the second race in the Playoffs, the World of Westgate 200 at the Las Vegas Motor Speedway.