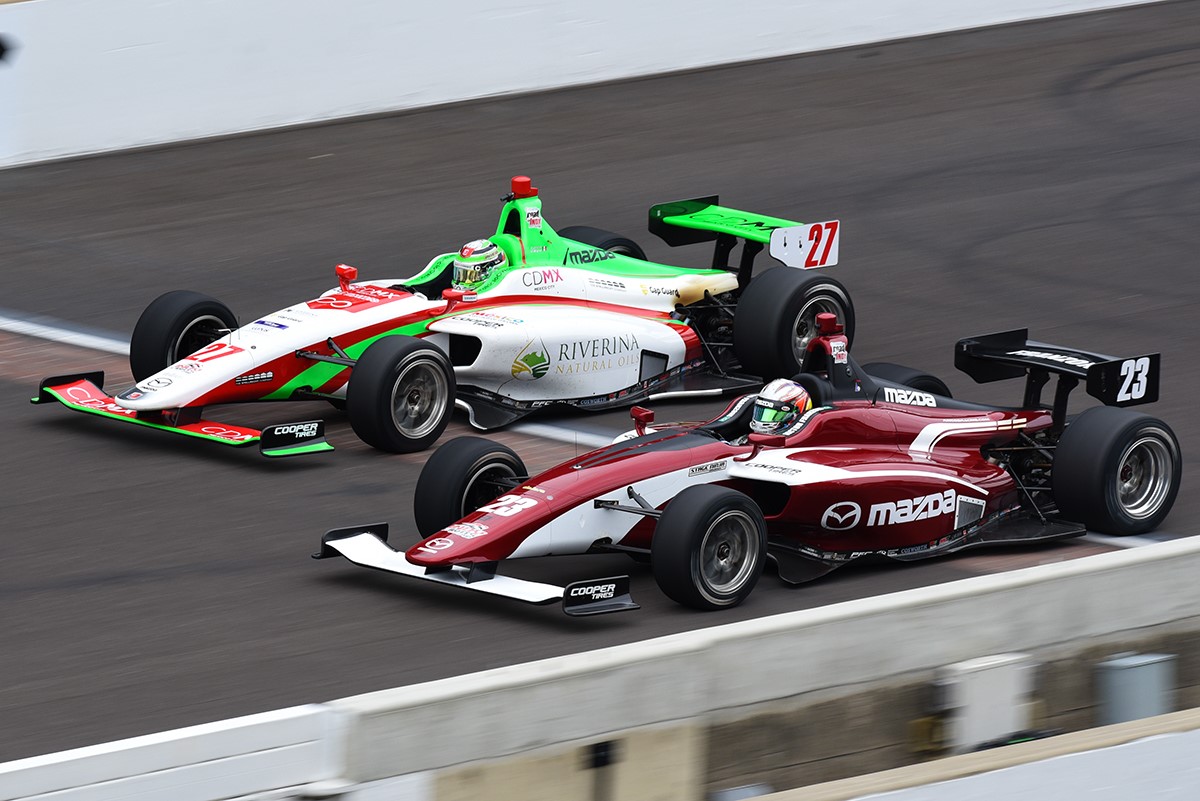 The events will take on a little more significance with additional points on offer for the final oval race of the season and several drivers still chasing potentially career-changing scholarship prizes that could take them one step closer to their ultimate dream of a career in the Verizon IndyCar Series.

O’Ward, Herta Vying for Scholarship Valued at $1 Million
The battle between talented teenagers Patricio O’Ward and Colton Herta has been raging since the season began on the streets of St. Petersburg, Fla., in March. At stake is a scholarship valued at $1M to guarantee entry into a minimum of three Verizon IndyCar Series races in 2019, including the 103rd Indianapolis 500.

O’Ward, 19, from Monterrey, Mexico, grasped the upper hand initially with three wins from the first four races for Andretti Autosport, only for 18-year-old Herta, a second-generation racer from Valencia, Calif., to fight back with four consecutive triumphs for the sister Andretti-Steinbrenner Racing organization. After the Road America weekend in late June, Herta held a 17-point advantage. But since then there has been another switch in momentum. O’Ward now has won four of the last five encounters – including a sweep of the two road-course races at Mid-Ohio last month – while Herta has been on the back foot following a series of incidents in Toronto, where he sustained a broken thumb. Herta limited the damage to his championship aspirations by finishing a gallant second in both Mid-Ohio races but still has a 32-point deficit to overcome if he is to snatch the top prize.

This weekend’s 75-lap Mazda St. Louis Indy Lights Challenge Presented by Cooper Tires will represent the third and final oval race of the season, and it is perhaps appropriate that the two previous all-left-turn races – at the Indianapolis Motor Speedway and Iowa Speedway – saw Herta and O’Ward each claim a victory and a second-place finish.

Another win for O’Ward – or any scenario in which he outscores Herta by at least seven points – would be enough to provisionally put the championship out of reach, but with ovals offering one-and-a-half times the usual points payout (45 for a win, plus single bonus points for pole position and leading most race laps), Herta has a little extra incentive to finish ahead of his rival at Gateway.

While the focus will be on the two title contenders, any of the remaining drivers in the small but high-quality field are capable of challenging for the win. Take Uruguay’s Santiago “Santi" Urrutia, for example. After finishing second in the Indy Lights championship in each of the past two years, Urrutia’s hopes of finally taking the crown seem to have dissipated (O’Ward only needs to quality for each of the three remaining races), but the charismatic South American is keen to finish his season with a flourish… and it was he who claimed a hard-earned victory in this corresponding event one year ago.

Belardi Auto Racing teammate Aaron Telitz, from Birchwood, Wis., is similarly keen to finish a disappointing season on a high note, while last year’s winner of the Pro Mazda Championship Presented by Cooper Tires, popular Brazilian Victor Franzoni, will be chasing another victory in the memory of close friend and mentor Jeff Green, from nearby Peoria, Ill., who tragically lost his life earlier this year in a vintage race car accident.

The Andretti Autosport pair of Dalton Kellett and Ryan Norman also have solid credentials. Kellett, from Toronto, Canada, has finished on the podium in four of the last six Indy Lights oval races, including claiming pole position for this year’s Freedom 100 at Indianapolis, while Norman, from Aurora, Ohio, has secured podium finishes recently at both Toronto and Mid-Ohio.

A fast-paced weekend will commence with a solitary 45-minute practice session on Friday, August 24, followed by single-car qualifying later that evening at 7:15 p.m. The green flag for the 15th of 17 races that will comprise this year’s Indy Lights championship will fly at 4:40 p.m. on Saturday, immediately prior to the Bommarito Automotive Group 500 Verizon IndyCar Series headline event. All times are CDT.

VeeKay Inches Closer to Pro Mazda Crown
A streak of four consecutive victories for Juncos Racing has taken teenaged Dutchman Rinus VeeKay to the brink of winning the Pro Mazda Championship Presented by Cooper Tires and a Mazda Scholarship worth $790,300 to move on to the next rung of the Mazda Road to Indy open-wheel development ladder, Indy Lights Presented by Cooper Tires, in 2019.

The point permutations are complicated with three races remaining on the schedule – especially since Saturday’s Mazda St. Louis Pro Mazda Oval Challenge Presented by Cooper Tires will offer points-and-a-half (so 45 points for a win, rather than the usual 30), plus the fact that every driver will be required to drop his worst score at the conclusion of the 16-race season. Nevertheless, with VeeKay now holding a 25-point advantage over Canadian Parker Thompson, victory at Gateway for the 17-year-old from Hoofddorp, Netherlands, will require Thompson to finish on the podium in order to keep his own title hopes alive when the series visits Portland International Raceway next weekend for the final two races.

Thompson, from Red Deer, Alb., will need to bounce back from disappointing outings at Toronto and Mid-Ohio, which produced a best finish of fifth from the four races, but he will be buoyed by the fact he guided Exclusive Autosport’s Tatuus-Mazda PM-18 to an impressive victory in the only other oval race this year – at Lucas Oil Raceway at Indianapolis in May.

Brazilian Carlos Cunha (Juncos Racing) currently is placed third in the standings, 68 points adrift of VeeKay, and will need something akin to a miracle to wrest the title from either of the top two protagonists. Instead, his main priority will be to claim a long overdue maiden victory after snagging 11 podium finishes over the course of the past two years.

David Malukas and Oliver Askew are tied for fourth in the championship. Malukas, from Chicago, Ill., already has won twice for BN Racing (at Road America), while fellow rookie Askew, from Jupiter, Fla., has finished on the podium in two of the most recent three races for Cape Motorsports. Askew, who beat VeeKay and Thompson to last year’s Cooper Tires USF2000 Championship Powered by Mazda, has three poles to his credit this year as well.

Others to watch will include Englishman Harrison Scott, who won twice for the Italian-based RP Motorsport Racing team earlier this year and is set to make a welcome return after missing the two most recent races at Mid-Ohio following a monster accident in Toronto; and Idaho teenager Sting Ray Robb, who has displayed a promising turn of speed for Team Pelfrey.

Coverage of both races can be found on a series of platforms including Road to Indy TV, the Road to Indy TV App and dedicated broadcast channels on demand via Apple TV, Amazon Fire and Roku and, most recently, the Xbox One Official App as well as live streaming and live timing on the series’ respective websites and indycar.com. Indy Lights is also featured on the Advance Auto Parts INDYCAR Radio Network broadcasts on Sirius 214, XM 209, IndyCar.com, indycarradio.com and on the INDYCAR Mobile app.

The Indy Lights race will be broadcast on NBCSN at 12:00 pm EDT on Sunday, August 26.