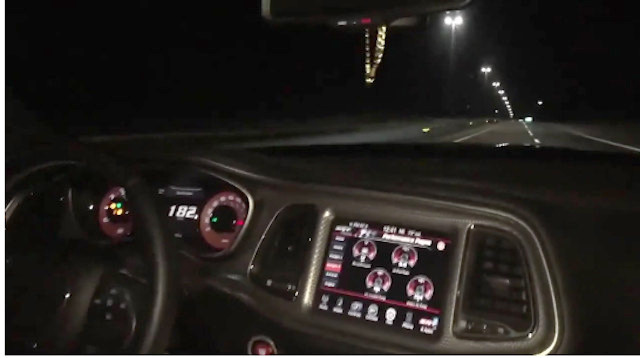 The Dodge Challenger Hellcat is a 200-mph machine. It's a 707-horsepower (717 for 2019) insane muscle car that's warped our definition of "appropriate power." But with that power comes responsibility, and that's something a 22-year-old in North Carolina clearly lacks. William Jefferson posted a video of himself driving his Hellcat 198 mph to YouTube. That's stupid on two counts.

A concerned citizen sent the video to the North Carolina State Highway Patrol, and they were none too pleased.

The stretch of Wake County, North Carolina, road in the video is US-1. It appears to be in great shape with clean paint marking the lanes and long, empty, flat stretches that should signal a peaceful albeit boring commute. What that signaled to Jefferson, however, was the perfect place to exercise his Hellcat and best the local speed limit by almost 130 mph.

In the seven-minute clip sent to the police, Jefferson is seen doing donuts, showing off his supercharged 6.2-liter V-8 engine, and ripping through 40 mph zones at more than 100 mph. In the same video, the Hellcat hits 198 mph. That's wildly stupid and irresponsible, not just because of the closing speed with respect to any potential motorists in his path, but even if the road were devoid of traffic, it might not be free of late-night animal life. Hitting a deer at that speed would turn it into dust while also leading to a potentially tragic outcome for the driver.

The police report that Jefferson has an otherwise clean record save for a few traffic violations. That record has added a few marks, though, courtesy of the North Carolina State Highway Patrol. He's been charged with street racing and careless and reckless driving.