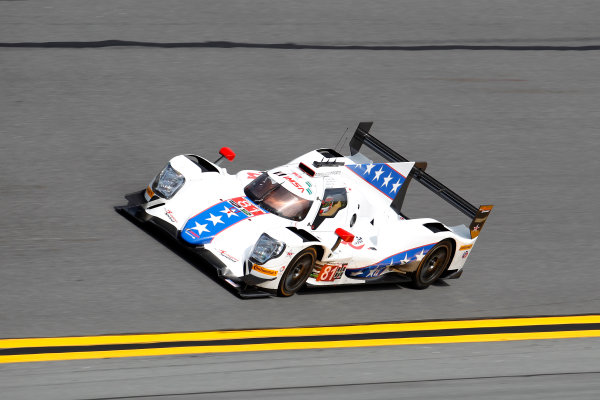 DragonSpeed is planning a return to the Rolex 24 at Daytona under the new split LMP2 class format, according to team boss Elton Julian.

The U.S. outfit, which currently runs Oreca 07 Gibsons in both the FIA World Endurance Championship and European Le Mans Series, is working on a likely entry into next year’s IMSA WeatherTech SportsCar Championship season-opener with at least one LMP2 car.

It would mark the team’s first WeatherTech Championship start since the 2017 Mobil 1 Twelve Hours of Sebring and its return to Daytona after debuting the new-gen Oreca nearly two years ago.

Julian told Sportscar365 that the team’s chances of returning are “high" following IMSA’s decision to split its top category into separate DPi and LMP2 classes for 2019.

“We’ve been asking for it [the prototype split] since day one," he told Sportscar365.

“We were one of the first ones to go there with the P2 car, but we learned our lesson then.

“I love the DPi category and I love the P2 category, I just never thought they should race against each other."

Julian indicated they would likely field at least one car, with one of the Oreca LMP2 cars already due to be Stateside for the 1000-mile race at Sebring in March.

The team, which bases its European operations in France, owns two active Oreca chassis, split between its full-season WEC and ELMS programs.

Jackie Chan DC Racing could also appear at Daytona but with a satellite DPi entry, according to Jota Sport’s Sam Hignett.

The UK-based squad, which runs the pair of Jackie Chan-backed Orecas in the WEC, has ties to 2017 Daytona winners and Cadillac DPi outfit Wayne Taylor Racing.

Hignett said the team could forge a one-off entry that would keep it in the top category after its debut with a pair of Oreca LMP2 cars this year, which were supported by WTR logistically.

Referring to the IMSA prototype split, Hignett explained that the decision “hurts our aspiration there with an LMP2 car."

“What it does mean is that I need to strengthen our relationship with the DPi teams, because the only way we would race there now is with a DPi car," he told Sportscar365.

“We wouldn’t go back there with an LMP2 car if we can’t win outright, but we’re close to IMSA teams so we would go back there as a satellite DPi car.

“Tentatively, for Daytona it’s something that we’re looking at."

Daytona “Not on the Horizon" for Rebellion

Rebellion Racing’s Bart Hayden, meanwhile, has discounted the possibility of the Swiss squad appearing at Daytona in the wake of the class split.

“It’s a tricky one," he told Sportscar365. “I can fully understand the reasons why [the split] would happen.

“If you’ve got an LMP2 car and you’re in WEC, and you’re thinking of going to IMSA, it would make that less interesting.

“If you’re already over in the USA then I think you have to look at getting into DPi which we’ve seen a few teams doing.

“As an LMP2 customer, I would be less interested in going and taking part. Daytona’s not on our horizon, certainly for the next year or so. Sportscar365