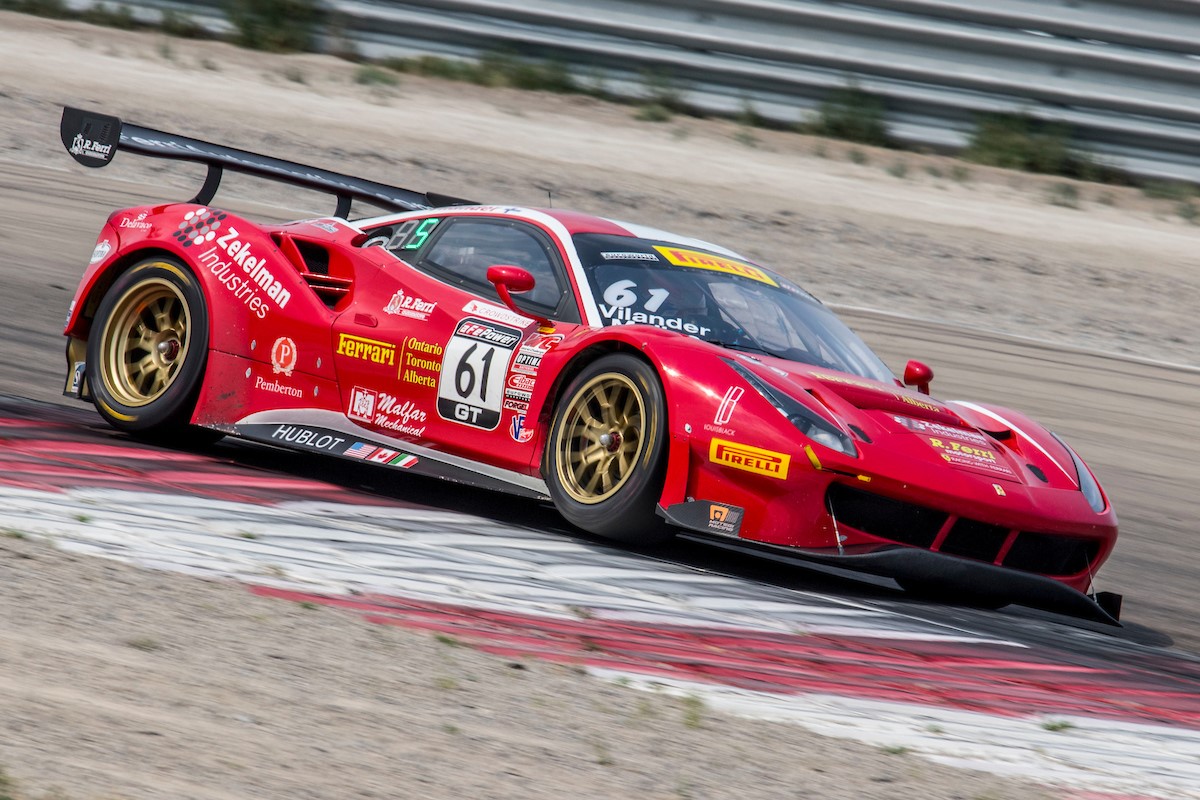 The Ferrari duo of Toni Vilander and Miguel Molina were challenged early in Sunday’s GT SprintX 60-minute race at Utah Motorsports Campus, but the drivers of the No. 61 R. Ferri Motorsport Ferrari 488 GT3 made it look easy in the end with their sixth 2018 victory and the GT SprintX drivers championship in the Pirelli World Challenge Grand Prix of Utah.

Spain’s Molina, enjoying his first racing competition season in North America, chased down early race leader Scott Heckert in the No. 80 Lone Star Racing Mercedes-AMG GT3 and grabbed the GT SprintX overall lead before Finland’s Vilander took over the advantage in the 32-lap contest to win by 2.945 second at the 3.048-mile, 14-turn outer road circuit southwest of Salt Lake City.

The victory was the second of the weekend for the Ferrari boys and the sixth in ten GT SprintX events this year to easily clinch the Pro-Pro category crown.

“We drove this race as a normal race of any championship," said Vilander. “I just don't want to take it easy. Many times things happen when you stop calculating and lose calculations. It's better to go flat out, not too crazy, but do your job normally. This is what we did. I am thinking about the overall championship also, and we talked about it over several weekends also. It's been great to be a part of this championship with R. Ferri. We've grown together to capture these championships. This is also good for Remo. He's been there fighting for the championship for years. He's been going through some tough times, but he's very passionate about winning. He's been there fighting for championships all along, so this is a great win for the team and especially for him.’

“I had a good start," said Molina. “I needed a chance to be out of traffic, so I could brake hard into the first corner. After that, I got into P2 and then I just raced not too hard because I didn't want to risk too much on the low tire pressures. By the end of my stint, the car felt good and ready, so I tried to give the last part of my stint a good pace. We knew that was important, especially when the Mercedes went to pit. We stayed out and that allowed us to have a better chance on the driver switch for us. I'm really happy. It's my first championship in America and we achieved the goal we set out to do. Toni still has one Race weekend to go but I'm happy to get my championship for myself, for the team, and for Ferrari."

As in the Pro-Pro division this weekend, another Ferrari combo of Jeff Segal and Wei Lu took top honors in the Pro-Am in the No. 31 TR3 Racing Ferrari 488 GT3 with a 6.615-second triumph over the No. 19 TruSpeed Autosport Audi R8 LMS GT3 of 17-year-old Parker Chase and veteran Ryan Dalziel. But the wins this weekend were bittersweet for the Segal/Lu pairing, as Chase and Dalziel clinched the GT SprintX Pro-Am championship Sunday.

“At the start, we had to be aggressive to get in front of the No. 19 Audi," said Segal. “That was very important for us today. I had thought of going after P2 (Molina) in the early stages of the race. But it didn’t make sense with the risk of the other Ferrari in front. Great credit to TR3 and Ferrari of Vancouver for giving us a great car today. All we could do this weekend was run for th win and hope for misfortune for the Audi. We did our part and got the wins. Unfortunately, the rest didn’t go our way for the title."

“Jeff had a great start today and I just wanted to stay up front in our Pro-Am class," said Lu. “When the Audi got closer to me, Jeff said to push and I drove harder. And we were able to maintain the advantage. We had a good year despite finishing second in the Pro-Am championship. We had fun together."

After a great run early in the race, Heckert and his co-driver Mike Skeen took the No. 80 Mercedes-AMG GT3 to the runner-up position Sunday with Denmark’s Michael Christensen and Atlanta’s Spencer Pumpelly rounding out the GT SprintX overall podium in the No. 24 Alegra Motorsports Porsche 911 GT3 R.

Yet another Ferrari duo, Martin Fuentes and Caesar Bacarella, stepped to the top of the victory podium Sunday with a GT SprintX Am-Am race win in the No. 07 Squadra Corse Italia Ferrari 488 GT3. And the Fuentes/Bacarella/Ferrari combo dominated the Am-Am series all season to easily capture the class championship in GT SprintX.

“We had a stressful race yesterday (Saturday) but we came back strong today with a great win and clinched the series championship," said Fuentes, the 2016 GT Pro-Am series titleholder. “Caesar had an amazing drive today and I’m so happy to be part of the Squadra Corse Italia Ferrari team this year. It was my first year with this team and we went out and won the championship. That’s a thrilling feeling."

“It feels great to win today and take the Am-Am point championship," said Bacarella, driving his first year in the Pirelli World Challenge. “It was so great to learn from Martin in my first season in a GT3 car. It was an exciting year for me."

The Pirelli World Challenge now moves to Watkins Glen International on Aug. 31-Sept. 2 for the final weekend of the 2018 GT Sprint, GTS Sprint and Touring Car classes. The GT and GTS Overall, GT Sprint, GTS Sprint championships will be on the line as well as the TCR, TC and TCA class titles.