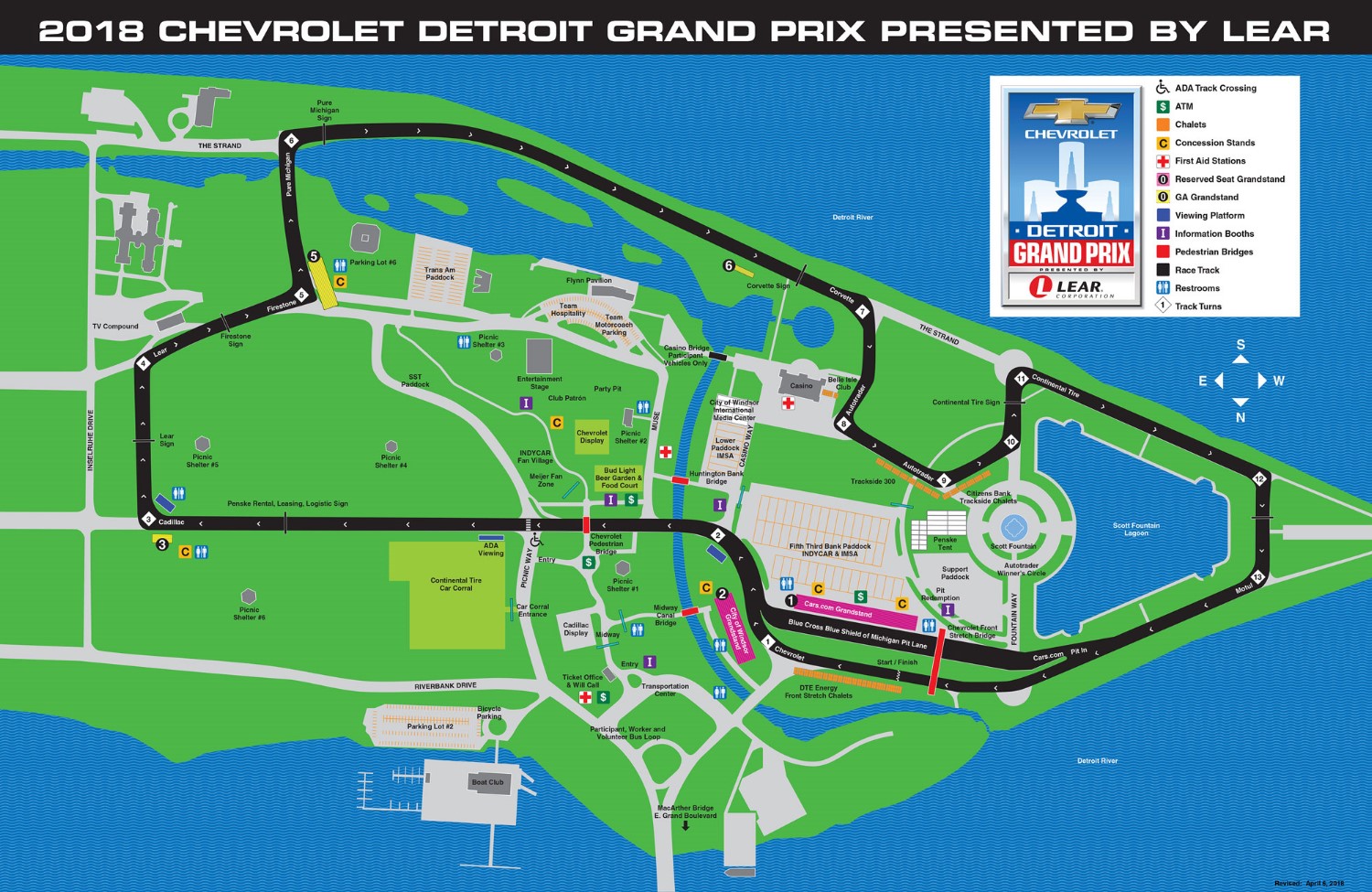 UPDATE The Detroit Grand Prix and the Michigan Department of Natural Resources (MDNR) have reached an agreement for the annual motorsports festival to continue on Belle Isle for at least three more years.

Under the terms of the agreement, the Grand Prix will return to its home on Belle Isle for three more years beginning in 2019, with an option for extending the agreement two additional years through 2023.

The previous agreement to host the Detroit Grand Prix on Belle Isle concluded with the 2018 race. Grand Prix officials listened to public feedback on the future of the race over the past year, consulted with stakeholders and made the decision to submit a proposal to the MDNR on July 13 to continue the event on the island. The MDNR, which manages the operation of Belle Isle Park, responded to the proposal with suggested changes on July 20. The Grand Prix adjusted its proposal and today reached an agreement to secure the future of the event.

As a result of the feedback received from the public, the MDNR and the Belle Isle Park Advisory Committee, the Grand Prix has made some key changes under the new agreement that will continue to positively impact Belle Isle Park. The event will further reduce its overall build out and post-event take down time on the island to just 60 days in 2019 and 59 days in 2020 and 2021. This represents a reduction of five days from the total time spent on the island in 2018 and a 35-day reduction from 2015.

The Grand Prix will also increase its annual total contribution for hosting the event on Belle Isle from $200,000 to $450,000 for each year of the new agreement. This includes an annual $325,000 event fee and a contribution of $125,000 annually to be used by the MDNR for specific projects on Belle Isle. The Grand Prix will also continue to host the Grand Prixmiere fundraising event on Friday night of event weekend over the course of the new agreement. The Grand Prixmiere has raised more than $4 million for the Belle Isle Conservancy over the last five years with the funds dedicated to improvements on the island.

“We are excited that the Detroit Grand Prix will continue at Belle Isle for the next several years and we want to thank the State of Michigan for working with us on this new agreement, as well as our partners with City of Detroit and the Belle Isle Conservancy," said Bud Denker, Chairman of the Grand Prix. “This event means so much to Detroit, to Windsor and our entire community. We are proud to showcase the beauty of Belle Isle around the world every year and to make such a positive impact on the local economy with over $50 million in total spending generated annually as a result of the Grand Prix. Most importantly, we want to continue our goal of improving Belle Isle Park. The Grand Prix has made over $13.5 million in improvements on the island over the last decade and we know there’s still a lot more work that needs to be done. Our team looks forward to building on all of the positive momentum and being part of the remarkable renaissance going on at Belle Isle."

With the new agreement in place, event officials confirmed the Chevrolet Detroit Grand Prix presented by Lear will return May 31-June 2, 2019 on Belle Isle, with its customary date the weekend following Memorial Day to start the summer season in the Motor City.

“We listened to all of the feedback and we appreciate everyone’s perspective and support of the Grand Prix," said Michael Montri, Grand Prix President. “This was an important process for all of us and we’ve made some significant changes to the event over the years as a result of the input we received from the public, as well as our partners. We’re now focused on celebrating the 30th Grand Prix in Detroit’s history in 2019 and we’re excited to be back on Belle Isle."

More details on the Chevrolet Detroit Grand Prix presented by Lear will be announced in the coming weeks, including when tickets will go on sale for the 2019 event.

08/03/18 The Belle Isle Advisory Committee Thursday adopted a resolution aimed at continuing the Detroit Grand Prix on the island, with some safeguards in place.

And both members of the committee and race chairman Bud Denker, executive vice-president of the Penske Corporation, said the long-term future of motor sports on the island is unclear.

The measure was adopted during a meeting at the Belle Isle Nature Center attended by 200 people, some of whom spoke for and against continuing to have the event on the island.

“It would be a serious setback to lose a significant funding source and the impact would be immediately felt," said Michele Hodges, Belle Isle advisory committee chair and Belle Isle Conservancy president, who is championing public-private partnerships to restore the island.

“We need time to replace it," she said. “Three years is reasonable to replace these dollars. “As Bud said, they don’t plan to be here forever."

Denker said the long-term future of motorsport on the island is tied directly to the success in rehabilitating the 982-acre park, which the state rents from the city.

“Everything can’t go on forever," Denker said. “Sometime in the future, I don’t know when it’s going to be, we will have served our purpose here. We’ve done what we need to do.

“DNR (the state Department of Natural Resources) has said it also. But, we’re not there yet."

Ron Olson, state director of parks and recreation, will make the final decision. But the state’s evaluation that racing should be approved for another three years, with some tweaks to the organizers’ proposal, was discussed Wednesday.

Olson did not say when the DNR would render its decision.

Critics said racing conflicts with Belle Isle's recreational use and the state's conservancy role in protecting the island.

Olson said that while the state is interested, there is no interest in changing so the events coincide.

“What we wouldn’t want to have is that driving changes in the timing of the event," he said. Detroit News