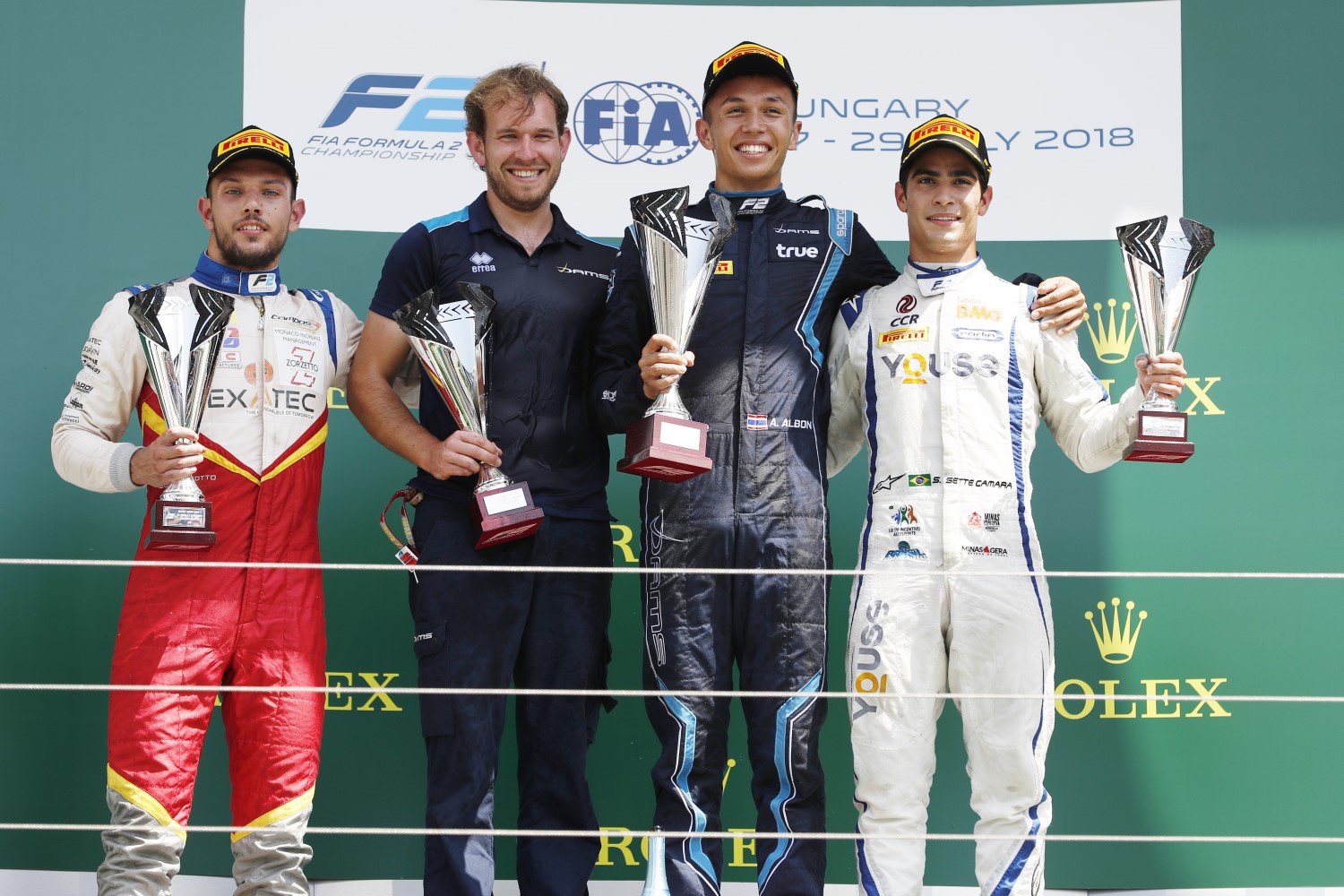 Alexander Albon took a magnificent victory in the FIA Formula 2 Championship race at Budapest, Hungary, hunting down long-time leader Luca Ghiotto and passing him with five laps to go to secure his third win of the season. Ghiotto followed the DAMS driver home, albeit 9.5s further down the road as Sergio Sette Camara took third place to complete the podium.

In increasingly hot conditions, Ghiotto kept his cool off the line to dart around the outside of Markelov and Sette Camara at the start, bolting into an early lead as Albon followed the Italian driver past the front-row starters. Immediately, a virtual safety car period emerged as a three-way tussle between Ralph Boschung, Roy Nissany and Alessio Lorandi left the Swiss driver off the road at turn 3, with Lorandi also retiring.

At the restart, Antonio Fuoco careened into the back of Sette Camara and broke his front wing, while the Brazilian driver darted past Markelov to elevate himself into the top three. Although Albon briefly threatened Ghiotto, the Italian managed to burst clear of the Thai driver and open up the gap to nullify the threat of DRS, setting fastest laps to cement his lead.

Markelov, looking to reclaim his lost positions, put Sette Camara under pressure. Attempting to make the difference at turn 1 with DRS, the Carlin driver calmly took to the inside line and forced Markelov to attempt the pass around the outside, ultimately keeping him at bay. Further down, the action was with the dueling pair of Lando Norris and Roberto Merhi, and despite trading blows were both able to catch up to Feature Race winner Nyck de Vries.

Having started well down the field following yesterday’s mechanical issues, George Russell began to make his way through the order to salvage something from the weekend, although Nicholas Latifi proved to be something of a cork in the bottle. The Canadian ran wide at turn 4 just after the midway point of the race, letting Russell and Louis Deletraz through to pursue the rest of the pack.

While Ghiotto had managed to fly off into a three second lead over Albon, the battle for fifth became fierce as de Vries did everything in his power to hold off Norris and Merhi, while simultaneously closing in on fourth-placed Markelov. By lap 20, the RUSSIAN TIME driver had been caught, and de Vries launched an attack at turn 1. Markelov defended from the Dutchman, but could do nothing as Norris powered around the outside of the pair of them in an impressive move. Merhi passed de Vries a few corners later, setting himself up for a lap 22 overtake on Markelov as the Russian began to visibly struggle with his tires.

There were also signs that Ghiotto was beginning to feel the effects of tire degradation, and Albon soon began to overturn his deficit to catch the Campos Vexatec Racing driver. At the start of lap 25, Albon made his move, keeping his foot planted on the throttle to cruise around the outside of Ghiotto at turn 1, scampering off into the distance. Meanwhile, Markelov began to drop down the order, falling victim to Aitken and Nirei Fukuzumi and going into the clutches of Gelael, Russell and Deletraz.

With tire degradation now a factor, positions began to switch frequently, and Fukuzumi had preserved enough life in his tires to pass Aitken into turn 2 and chase after de Vries. Albon, meanwhile, was chomping at the bit to extend his advantage and had opened up an almost-five second lead with two laps remaining. Continuing to push and extract the last drops of life from his tires, Albon cruised across the line with Ghiotto almost ten seconds further back in second place.

Sette Camara came home in third place, having little to do after seeing off the threat of Markelov, while Norris collected fourth to cut Russell’s championship lead down to 12 points. Merhi finished fifth, while Fukuzumi beat de Vries to sixth in a photo finish across the line – the timing screens registering the Japanese driver ahead by 0.001s. Russell’s charge through the field yielded a point, as he beat Deletraz to eighth.

F2 now moves into its summer break, with the next round taking place at Spa-Francorchamps, Belgium from the 24-26 August. Russell remains in the championship lead on 171 points, with Norris now 12 points behind on 159. Albon continues in third place, just 30 points behind Russell. Carlin reclaim the teams’ standings lead with 265 points, while ART are second with 232. DAMS return to third with 175 points, just one point ahead of Charouz Racing System.