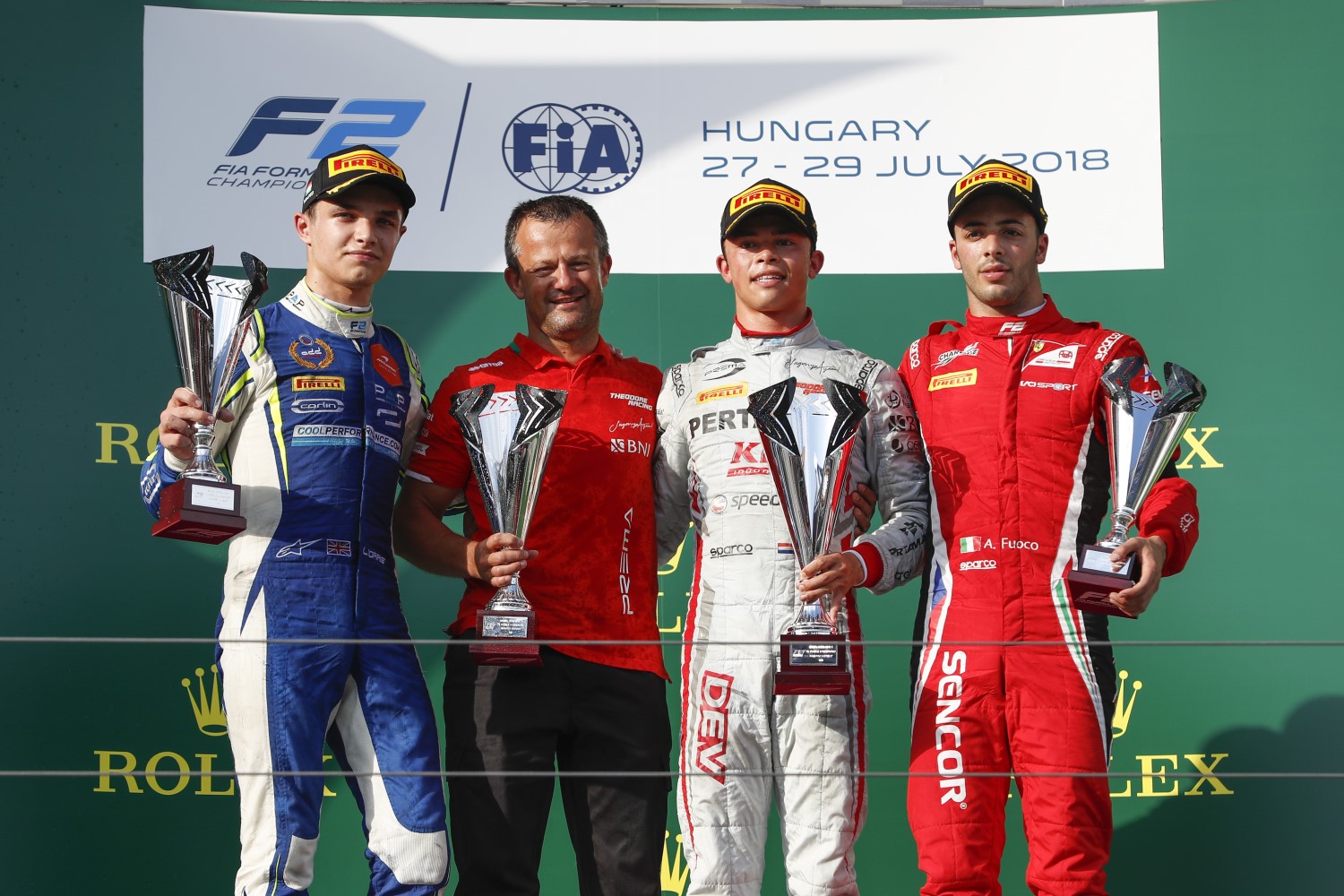 With the track considerably wet following an earlier thunderstorm, the race took three formation laps behind the safety car before the field lined up for a standing start. Once the drivers got away under the lights, the majority began the race tentatively under the tricky conditions, although polesitter Sette Camara was able to preserve his lead as de Vries charged into second, capitalising on a slow getaway for front-row starter Jack Aitken.

Immediately, Sette Camara began to build a break over de Vries, while further down the order Norris set about cutting through the field in order to improve on his starting position of sixth. As the British driver got into the groove he started to make progress, finding a drying line to catch and pass a fast-starting Fuoco to rise up to fifth. Aitken and Ghiotto were next in the Carlin driver’s sights, and were ultimately unable to resist Norris’ overtures as he tore through the pair on consecutive laps.

Out in front, Sette Camara was able to flex his muscles and create a 3.3-second lead over de Vries by the seventh lap, who was under heavy fire from Norris as the Brit continued his charge up the order. Immediately, Norris put his teammate under pressure, catching Sette Camara hand-over-fist and setting himself up for an audacious move on lap 10; attempting to pass around the outside of turn 5, Norris switched back at the subsequent chicane to breeze past the Brazilian, scampering off into the distance.

Meanwhile, Fuoco had cleared Ghiotto for fourth, and the Campos Vexatec Racing driver began to fall back into the clutches of Aitken and Nirei Fukuzumi while Fuoco quickly caught de Vries to put himself in contention for the top three. With Sette Camara beginning to struggle, de Vries and Fuoco quickly accosted him – the Dutchman overlapping him on the run up to turn 4 on the thirteenth lap as Fuoco followed through in the next corner.

Norris looked imperious, charging into a 12 second lead by lap 15 as dry patches started to form on the circuit. Sette Camara led the switch to slicks, pitting on the lap after to trade his battle-scarred wets for the medium compound tire. Norris and de Vries followed suit a lap later, the leader holding a 14-second advantage over the second-placed PREMA driver before their escape to the pits.

The pendulum swung, and de Vries immediately began to put his dry tires to good use, finding an extra level of pace over Norris to eat into the lead. At the rate of over a second a lap, de Vries reeled Norris in with a series of fastest times, cutting the advantage to just a second at the end of lap 26. Fuoco began to lose touch with the front-runners, losing a place to Sette Camara having stopped a lap later than everyone else, forming something of a train behind him as he clung on to fourth place.

De Vries then made his move, stalking Norris to the top of the circuit before cutting inside at the chicane, showcasing the superior grip in his corner to surge into first place. His tires seemingly shot, Norris began to fall away quickly – de Vries quickly opening up a colossal lead as Sette Camara began to hunt his teammate down.

The Brazilian’s desires on second place had to be put on ice, as a lap 30 virtual safety car was produced for DAMS’ Nicholas Latifi, who pulled over at the side of the road with presumed mechanical issues. Returning to action a lap later, de Vries was able to underline his latent pace and extended his advantage, crossing the line with a 16.8s lead to collect a famous victory.

Norris held on in the dying stages for second place, somehow repelling Sette Camara’s assaults into turn 1 – the latter of which allowed Fuoco to slip through into third. Seeking to reclaim third, Sette Camara attempted to dispatch Fuoco at the penultimate corner, but tipped the Italian driver into a spin to cross the line behind Norris – quickly earning a ten-second penalty to hand third back to Fuoco for his fifth podium of the season.