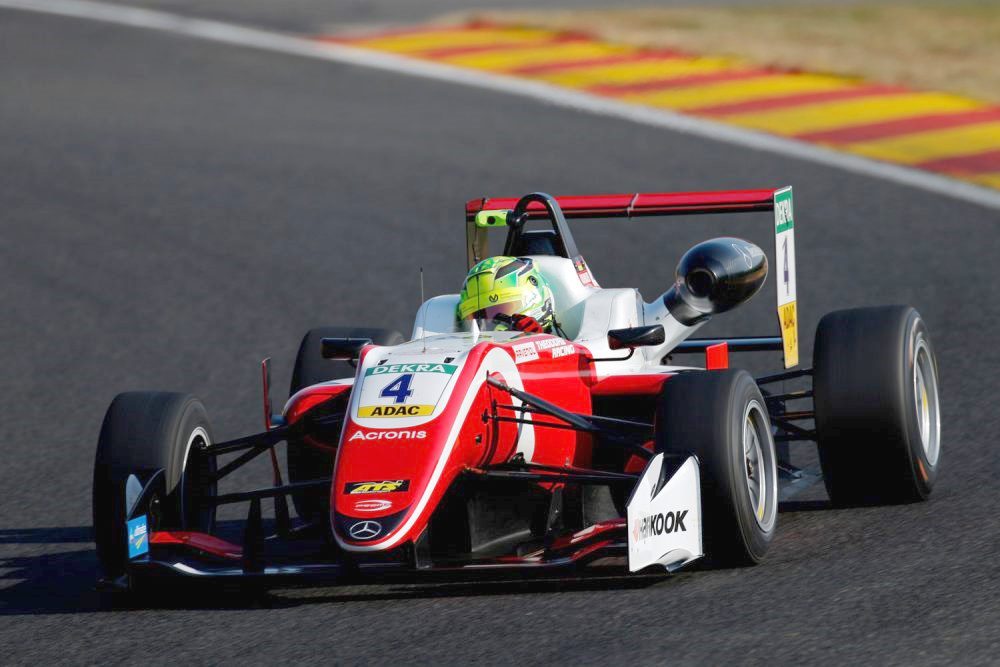 The fourth Prema car of Guan Yu Zhou started the race on pole, but was swamped by his team-mates as they approached the end of the Kemmel Straight on the first lap and found himself at the back of the field after an incident with Schumacher.

Armstrong took the lead, with Schwartzman moving into second and Schumacher third.

The top three immediately broke away, leaving Carlin’s Jehan Daruvala to initially hold off a large train of cars in fourth place.

A lead was quickly established over Schwartzman, with Schumacher also dropping back slightly. However as the track dried the balance switched to the two Prema cars behind the leader, and the team-mates had converged again by the second half of the race.

Schwartzman’s first attack for the lead came at the end of the ninth lap, and he tried again at La Source just a few seconds later. The move was complete before the trio approached Eau Rouge, at which point Schumacher also overtook Armstrong.

The move was clean, and with Schwartzman leaving the right hand side of the track unguarded down the Kemmel Straight, Schumacher was into the lead by Les Combes.

Armstrong’s car wasn’t as reactive in the drier conditions, and although Schwartzman hung onto the leader, he was never close enough to force an attack, leaving the 19-year-old German to take his first victory on his 45th attempt.

Daruvala lost fourth place to Motopark’s Juri Vips on the second lap of the race, with the Estonian having started 11th on the grid after colliding with Prema’s Ralf Aron while fighting for the lead in the second race of the weekend.

Vips looked to be the fastest driver in the wet, but the gap to the top three grew and he ended the race over 11 seconds behind.

Motopark team-mate Dan Ticktum finished fifth, but spent most of the race looking like he’d finish seventh. The Briton gained a place when Daruvala made a mistake late in the race, and then slipstreamed past Hitech GP’s Enaam Ahmed to take fifth.

After taking the position he then tried breaking the tow by making multiple direction changes on the Kemmel Straight, earning himself a driving standards flag but no penalty.

Ahmed still finished sixth, ahead of Ticktum’s team-mates Jonathan Aberdein and Sebastian Fernandez. The fourth Motopark car of Fabio Scherer finished two places behind, but was spun on the first lap and fought through the field to take the final point and fastest lap. Ahmed’s team-mate Alex Palou finished ninth.

Daruvala sank to 11th, but still the best Carlin driver as Ferdinand Habsburg was still several seconds behind him in 12th.

Zhou recovered to 13th, ahead of struggling team-mate and title contender Aron. The top four in the standings is now separated by 24 points, with Armstrong leading Ticktum, Aron and Zhou.