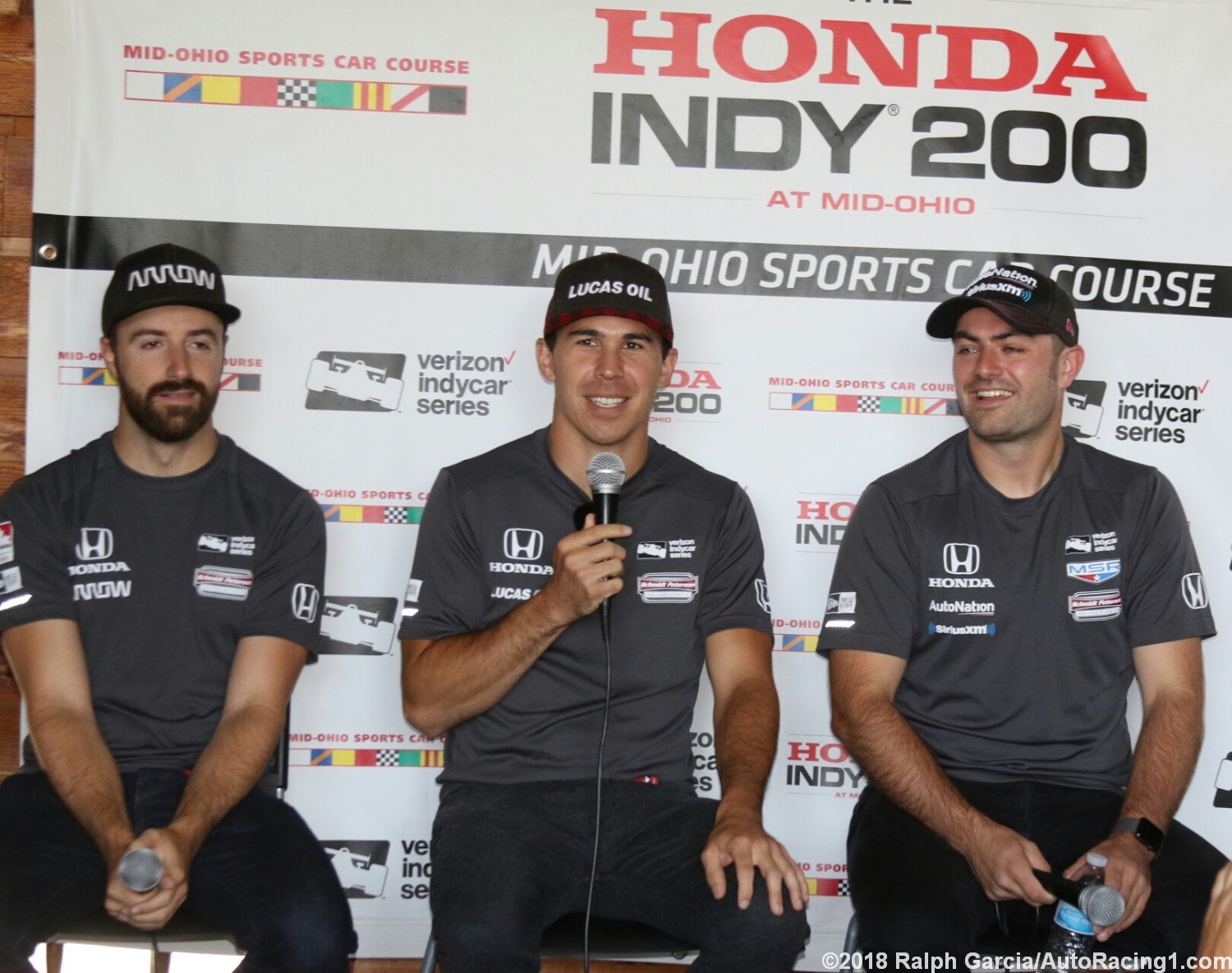 THE MODERATOR: We will go ahead and get started with our first Mid-Ohio press availability of the weekend. Joined now by three drivers from Schmidt Peterson Motorsports: James Hinchcliffe, Robert Wickens and Jack Harvey.

Jack, we'll start with you. A big weekend for you. It's a special place, not only the site where you got your first win here in North America, but also your team home race. Talk about how special this weekend is for you and your expectations for it.

JACK HARVEY: Well, I think as Michael said a couple of times, this is really a dream for him. He's from Columbus. A lot of the team work from here. This is his home race. We're here competing at the highest level you can in North America.

I know Michael has spoken about what it is a dream for him to finally get to this stage. Hopefully we're going to have the best weekend we can.

I'm not sure what we would class as a successful weekend. I think if we could transition to the top 12, that would be awesome. Same as always, try to race in the top 10, if we can.

I think we've had aspects of good weekends in the three that we've done here which have been pretty good. Need to keep working on that and hopefully deliver a good race for the boss man at his home track.

THE MODERATOR: Robert, you actually tested here last week. How did things go last week here at the track and how are things looking heading in?

ROBERT WICKENS: The test last week actually went weirdly well, is the way I'd put it. We're going to wait and see how we go. Honestly, it was one of those days where the car was a dream to drive. It was just like sometimes you're getting the lap time, you feel like you don't have to work that hard, you end up quickest. If that can roll over to this weekend, then should be a pretty strong weekend.

From what I've been told of this place, it's day sensitive: from one day to the next can change entirely. Hopefully the setup we found last week can carry over to this week. I think we'll have a pretty good weekend.

THE MODERATOR: James, you've been on a bit of a momentum roll here the past several weeks, top-10 finish every weekend since Texas. How important is that heading into a weekend like this?

JAMES HINCHCLIFFE: Unfortunately there's not a lot that translates from Texas or Iowa or Toronto to this place. But I think the team has been doing a great job of late. We kind of need to keep that going, take it one day at a time.

These guys were here last week testing. We gain add a lot of valuable information. If you look at the last couple weeks, the one thing we haven't been doing particularly well is qualifying. Unfortunately this is very much a qualifying track.

This is going to be a weekend we have to turn around or Saturdays and set ourselves up for a good Sunday.

Q. Robert, have you learned a lot of the give-and-take from the other drivers? Had a fierce battle with Simon. The longer this year goes on, do you learn what the give-and-take is between the drivers?
ROBERT WICKENS: Yeah, I mean, I think I'm learning. I was a believer to give everyone the same respect as they gave you. I'm learning next time around if Simon is on the other side of me, I can do the same thing he did to me. That was, I guess, a lesson.

No, I mean, I think there's give-and-take in every category, every track. Yeah, I think I'm finding my seat pretty well. I think it's time I start giving back a little more instead of taking crap from people. I think we'll have a good time.

Q. James and Robert, how great is it to have a third set of data with Jack joining you here?
JAMES HINCHCLIFFE: Yeah, I think with this new kit, we're going to every track really for the first time, every race weekend for the first time. All the races that Jack has joined us, I think it's been a huge benefit to the team.

Q. Jack, two more months then this year's season is over. What is the situation for 2019? A big possibility you will run the whole championship?
JACK HARVEY: I think honestly that is way above my pay grade. I told them I'm available for every race weekend that they want to go to, otherwise I'll just be here watching and cheering for the guys.

I think realistically 10 races is what we're going to try and shoot for. Any more than that would be a bonus. Any more we're doing this year is a bonus.

It's a weird balance. I want to be grateful we're doing more than the Indy 500, but obviously it's not a full season. We're trying to work hard to get to that spot, that point. It's very much a work in progress. Hopefully people will make the right decision.

Q. Jack, how beneficial is it to have their data to look at to help you out with what your experience has been around this track?
JACK HARVEY: I think it's fair to say it's benefitting me a lot more than it's benefitting those two guys. Robert and James have this great seasons to this point, driving extremely well. I think the whole SPM organization as a team has done well this year. They've taken big steps from last year to this year and are further up the field.

It's not easy jumping into a few races here and there. I'm not shaking off cobwebs, just some things don't feel as familiar to me. The nice thing about having the partnership with the team is we get to see what they've been working on, what they've been developing, kind of arrive at their end point as opposed to us having to work our own way to that goal.

So far it's been working very well. I think both parties are happy with how that partnership has played out.

Q. A couple of your competitors are celebrating a few more. Will has 200, Scott has 300.
JAMES HINCHCLIFFE: And won like half of them (laughter).

Q. What is your reaction to that?
JAMES HINCHCLIFFE: Well, I mean, drivers of the caliber of Scott and Will are always going to have long careers in this sport. From the day both of them showed up, they've been competitive. That competitiveness has not waned in the slightest in 200 or 300 races.

Like you said, I hit a hundred sometime last year. Time flies. If you talk to Scott, if you hadn't told him that, he wouldn't have any idea he was creeping up on it. It sort of just hits you.

Like I said, it goes to how hard they work, how talented they are. That's a dream, hitting 200. I'll be happy if I make it that far at this point. But 300, that's incredible. Very big congrats to both of those guys.

Q. James, are you learning about wedding registries and things of that nature?
JAMES HINCHCLIFFE: Not yet. Well, we thought we were just going to get to enjoy this phase of it for a little while. People are like, You need to book venues two months ago for the rough time you're thinking. It threw us both into a tailspin. I have work to do now, so that's on Becky's plate at the moment. We'll get there at some point.

THE MODERATOR: Thank you for coming in so early. We appreciate it.