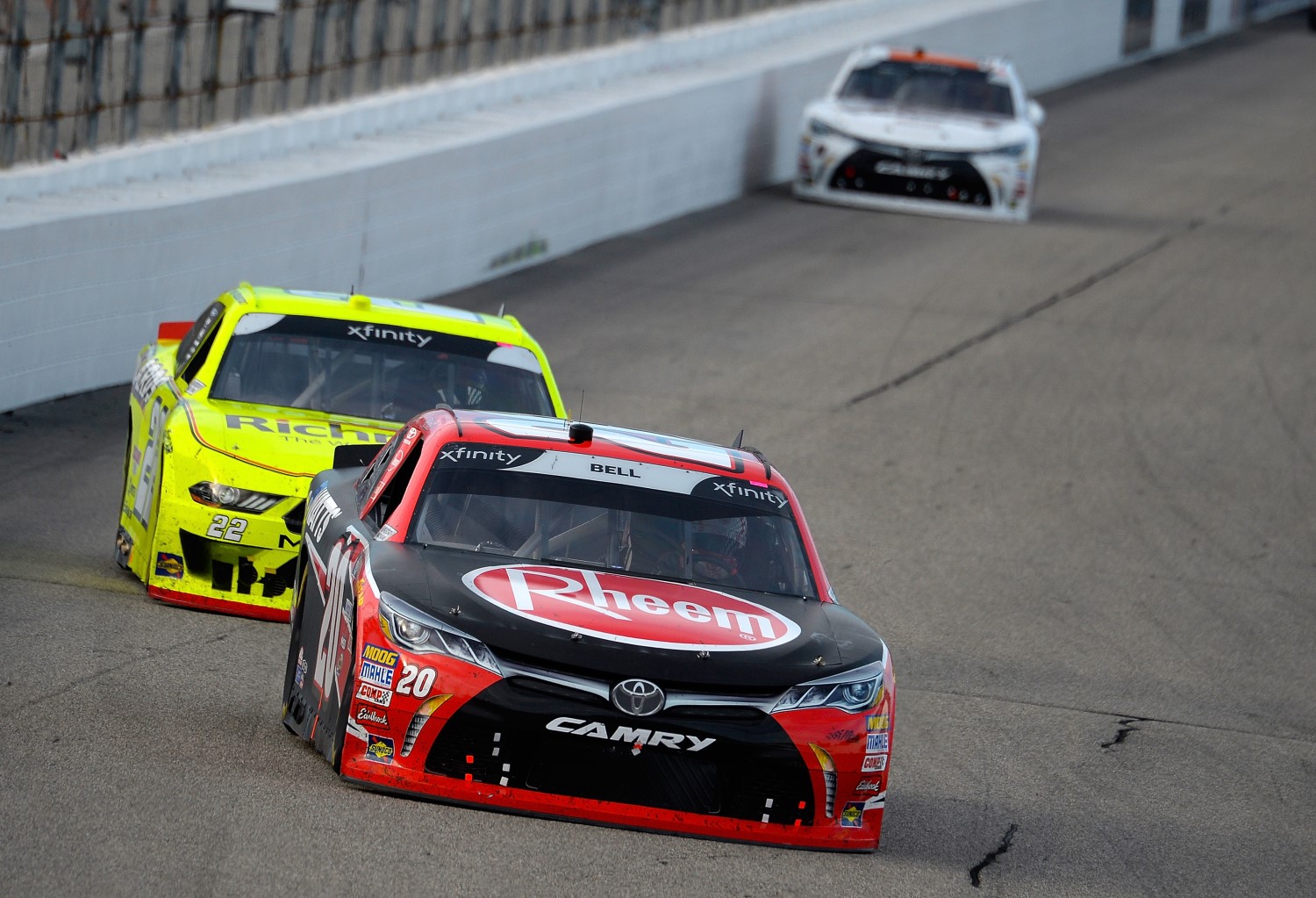 In winning his second straight race in the series, Bell grabbed the top spot from Keselowski on a restart on Lap 183 of 200 and kept the 2012 Monster Energy NASCAR Cup Series champion behind him the rest of the way, though Keselowski got within three feet of the rear bumper of Bell’s No. 20 Joe Gibbs Racing Toyota with three laps left.

However, when Jeremy Clements hit the sand-filled barrels at the entrance to pit road and caused the sixth caution on Lap 166, the field was bunched, and Wilson’s strategy was undermined. Keselowski held the lead through a restart on Lap 174 but lost it on Lap 183 after a caution for a wreck involving Garrett Smithley and Chad Finchum.

In his first Xfinity start at the Magic Mile, Bell picked up his third victory of the season and the fourth of his career—even though he couldn’t gauge his pit road speed because his tachometer was out of commission.

But strong guidance from spotter Tony Hirschman and fresh tires on all four corners of the car made up for the disadvantage.

“The better tires, they didn’t hurt us—that’s for sure," Bell said. “(Crew chief) Jason (Ratcliff) was able to put four on there and, man, we got going there that long green flag run, and I was getting really nervous because I didn’t have a tach, so I didn’t really know how I was going to get down pit road.

“But, luckily, I’ve got the best spotter on the roof, man, and Tony was able to kind of guide me and let me know, ‘Alright, I think you can pick it up a little bit,’ and then a couple times he told me to slow it down, so it worked out for us. We were able to take four tires there, and that was a big deal."

RELATED: See all the highlights from the Xfinity Series race

The way Keselowski saw it, two fresh left-side tires on his No. 22 Team Penske Ford might well have changed the outcome.

“I think we would have won today on four, but that’s not the way it played out," Keselowski said. “They (Bell’s team) did a good job and made the right call to put four tires on and kind of got us there, but it was all-in-all a good day.

“You kind of get mad about second and kind of don’t. You try to respect the fact that it was a great car today and a great effort for our team, but you know that the potential is there for more."

Ryan Preece finished third in his fifth trip this season in the No. 18 Joe Gibbs Racing Toyota. John Hunter Nemechek ran fourth, tying his career-best in the series. Fifth-place finisher Matt Tifft posted his second top five of the season. The cars of Preece of Nemechek failed heights in post-race inspection. Any potential penalties will be announced next week.

Notes: Bell won the first stage and Keselowski the second… Keselowski won the pole earlier in the day but started from the rear of the field after missing the drivers’ meeting. By the end of Stage 1, he had climbed to fifth place… Bell led 93 laps to Keselowski’s 72, indicative of the dominance of the two best cars in the field… Daniel Hemric, who finished 11th on Saturday, holds the series lead by six pints over Bell and seven over third-place Sadler… In the tight owner points battle, the No. 22 driven by Keselowski is six points ahead of the No. 18 driven by Preece. The No. 52 of David Starr had one lug nut found to be unsecure. The cars of Bell and Keselowski will be taken to the NASCAR R&D Center in Concord, North Carolina.

How did you hold off Brad Keselowski?

“The better tires, they didn’t hurt us that’s for sure. Always nice to – Jason (Ratcliff, crew chief) was able to put four on there and, man, we got going there that long green flag run and I was getting really nervous because I didn’t have a tach (tachometer), so I didn’t really know how I was going to get down pit road, but luckily I’ve got the best spotter on the roof, man, and Tony (Hirschman) was able to kind of guide me and let me know, ‘Alright, I think you can pick it up a little bit,’ and then a couple times he told me to slow it down, so it worked out for us. We were able to take four tires there and that was a big deal."

Did you ever dream while growing up that Kyle Busch and Brad Keselowski in consecutive weeks?

“That’s pretty special. I never dreamed I would be here at Joe Gibbs Racing. I never dreamed I’d be racing in the NASCAR Xfinity Series honestly, but, man, I’m just proud of this entire group at Joe Gibbs Racing. This No. 20 team works their butts of and really happy for all of our partners at Rheem, Ruud, GameStop, Toyota, obviously everyone at TRD (Toyota Racing Development) and bottom line I’m really thankful for Jack Irving, Tyler Gibbs, Pete Willoughby, Keith Kunz. Those guys are the ones that took – put their neck out on the line – so those guys right there put their neck out on the line for me and here I am today."

Why did you give the checkered flag to the young fan?

Was that fun racing Brad Keselowski at the end?

“Oh, it’s – I don’t know if it’s fun, but it’s stressful, that’s for sure. You know, he (Brad Keselowski) on tires there, he didn’t have left sides and we had four, so that was a big advantage for me and I was able to get a really good launch on the restart, so, you know, that was really the key there. I think he had a little bit better car than us, but pretty much all through practice we were really equal, so this place has been really good to me in the past, you know? I’ve never been much for a flat track, let it roll, easy in, easy off-type of deal, but this place has been really good to me."

Would you have thought you’d have three Xfinity Series wins at this point before the year started?

“Honestly, I would have said I’d better have three wins, you know? It’s a – whenever you come to here, you step in this equipment at Joe Gibbs Racing, you’re expected to win. Pressure’s on for you to deliver and thankfully I’ve been able to deliver at least some of the time."

How satisfying is this win?

“It’s great, man. To be able to run with the guys like running with Kyle (Busch) last week and then now (Brad) Keselowski, it’s, you know, you – at one point – you hope to race those guys at one point, so I’m thankful that I get the opportunity here in the Xfinity Series to race with them and proud that I’m able to compete with them let alone beat them."