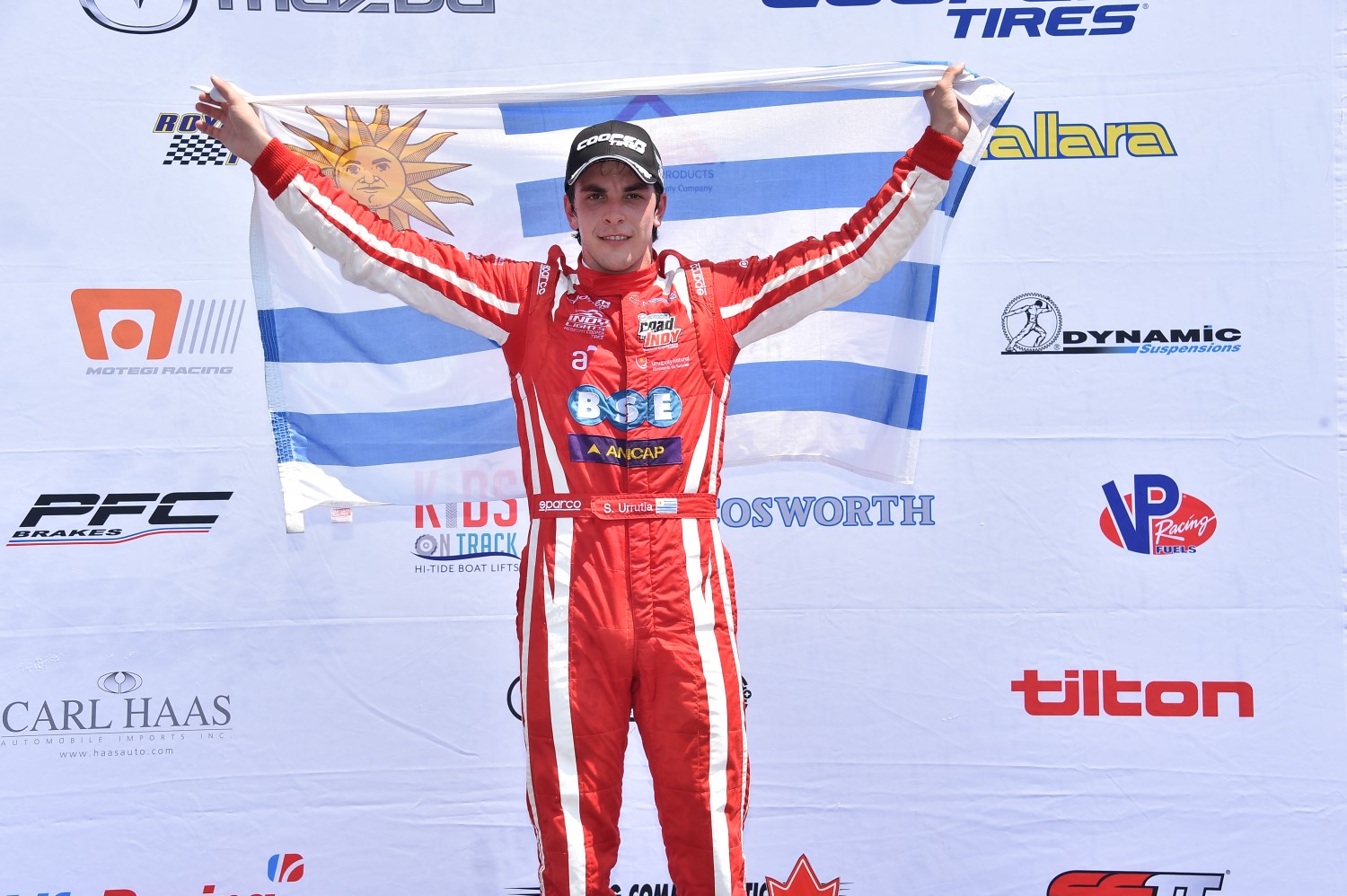 It's a sad state of affairs in IndyCar's top rung of its ladder series. Santi Urrutia scored his second Indy Lights win of the season for Belardi Auto Racing, but only 5 cars raced.

Urrutia came into this season as a hot favorite to win the Indy Lights Presented by Cooper Tires championship crown – and a scholarship valued at $1 million to advance to the Verizon IndyCar Series in 2019.

After all, he had finished a close second in the each of the last two years and was continuing with the same Belardi Auto Racing team with which he had won two of the final four races in 2017. But prior to this weekend he had won just one of the 10 races and lay almost 50 points adrift of pacesetters Colton Herta and Patricio O’Ward.

After finishing third yesterday and losing a little more ground to the points leaders, Urrutia, 21, from Miguelete, Uruguay, bounced back with a vengeance in today’s Cooper Tires Indy Lights Grand Prix of Toronto Presented by Allied Building Products. He secured his first pole of the season during qualifying this morning, and a few hours later drove a flawless race to take a well-earned victory.

Herta’s miserable weekend for Andretti-Steinbrenner Racing continued this morning when he once again found the wall during qualifying after posting the third fastest time. He was fortunate not to cause any additional damage to his left thumb, which had sustained a small fracture when he crashed during qualifying on Saturday. Herta’s team wisely chose to cut their losses and instructed him to start from the pit lane and then park the car after just a couple of laps in the hope of allowing an opportunity for the injury to heal in time for the final five races of the season.

Urrutia, making his 46th Indy Lights start, made full use of his pole position to grasp the lead into Turn One as O’Ward tucked in behind and Telitz narrowly held off Ryan Norman (Andretti Autosport) for third place.

The three leaders continuously traded fastest laps as they edged clear of Norman, with Urrutia finally managing to eke out a little bit of a margin over O’Ward, who remained under pressure from Telitz. The gaps ebbed and flowed but Urrutia had matters well in hand and finally took the checkered flag some 1.2708 seconds to the good – to the delight of his usual large posse of loyal South American supporters.

Telitz, who set the fastest race lap, was consistently a little bit quicker than both of his rivals in the closing stages but was unable to find a way past O’Ward and was largely content with his fourth podium finish of the season. Telitz also earned the Tilton Hard Charger Award.

O’Ward now holds an 18-point edge over Herta, with Urrutia a further 22 points in arrears, as the series heads next to Mid-Ohio Sports Car Course for another double-header event on July 28-29.

Santiago Urrutia (#5 Belardi Auto Racing Dallara-Mazda IL-15): “We’ve been struggling, so I’m very happy to get this win, especially for the Belardi guys who have worked so hard. It was super physical today. Pato was quicker than me early but once the grip came in, I was quicker. I’m happy, we needed this. It’s been frustrating lately and it’s been tough to be behind the Andretti cars but we never give up. The engineers and mechanics did a great job to give me the best car today. I made some mistakes early and nearly hit the wall in Turn Five late in the race to let Pato catch up but, other than that, there was no pressure."

Patricio O’Ward (#27 Mexico #AWorldOfItsOwn Mazda-Andretti Autosport Dallara-Mazda IL-15): “That was the most physical weekend I think we’ll have this season. It tested your mental and physical ability. I have never felt this track so slippery. The first four or five laps, it was like ice. Santi was all over the place and I knew Aaron was struggling. You could see the rubber on the track but there was no grip. But as the tires came in, the grip got better.

“Even if Colton was running, I wanted to be smart that race. I didn’t want to do anything that would put myself or the championship in any danger. I got beside Santi a few times but that was mostly to hold off Aaron. It was a smart race and I’m happy about my performance this weekend."

Aaron Telitz (#9 Rice Lake Weighing Systems-Belardi Auto Racing Dallara-Mazda L15): “It was super greasy today in the heat – I think all of us nearly crashed early in the race. As the race continued, we got in a groove but I was still thankful when the checkered flag came out. It was a pretty up-and-down weekend. We were looking at a podium finish yesterday but had a bit of a mishap in Turn Three and had to pit for a new wing. For some reason, we just didn’t have it in qualifying this morning so this is one of those days in which a podium feels like a win. Any good result feels good after the start to the season that we had, but that will make the first win this year feel that much better – and I know it’s coming."