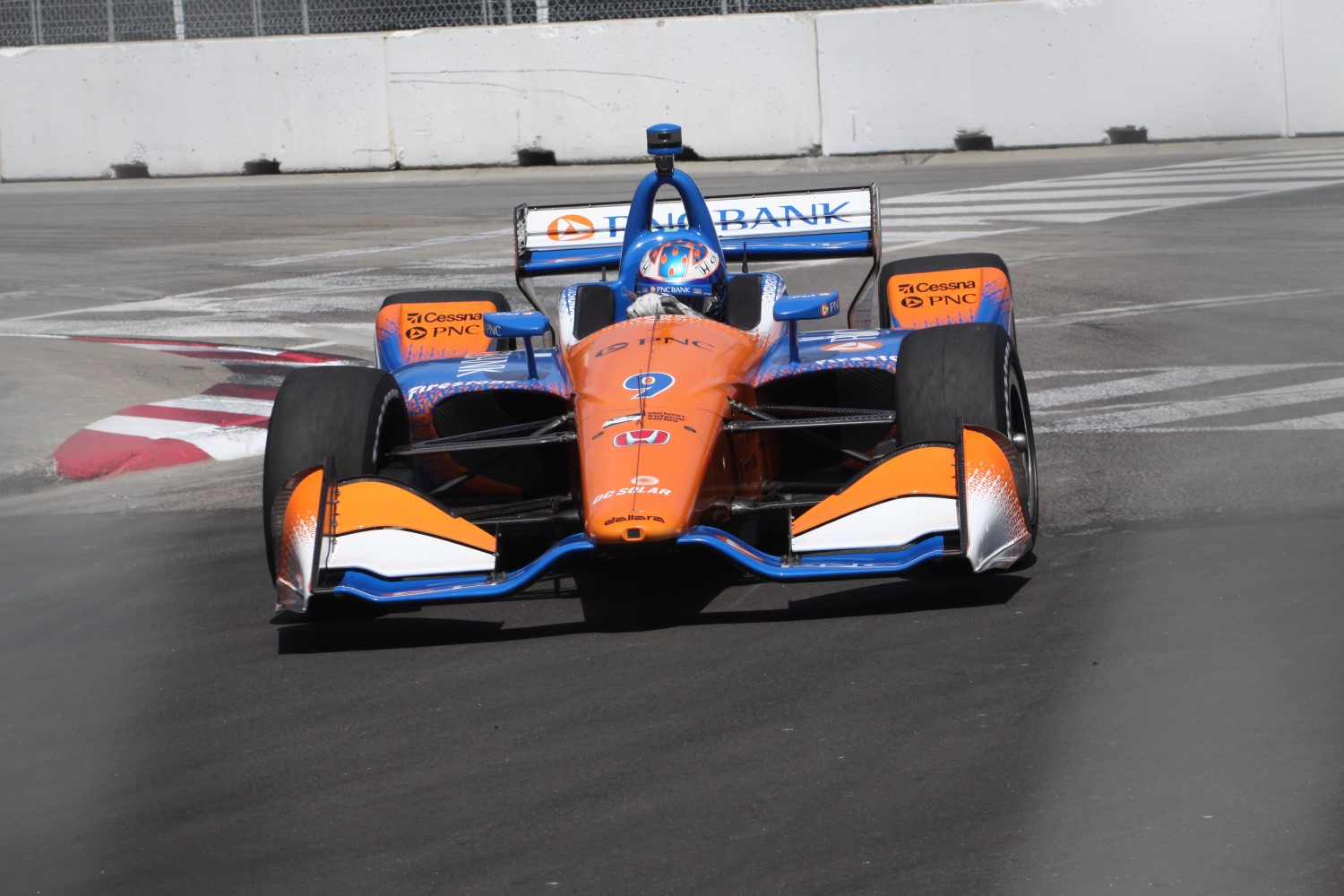 UPDATE With only an a half an hour before qualifying starts, the rain is starting to fall. Thunderstorms are back in the forecast for the whole qualifying session.

07/14/18 Takuma Sato, driver of the number 30 Rahal Letterman Lanigan Racing entry, was the fastest in the morning practice session. At the end of practice, Sato got out of this car, unzipped his driving suit and stood in front of a fan to cool himself off. His suit was wet with sweat due to the hot temperatures early today.

AR1 asked Sato how the track was this morning. "It was a good morning and we kept up the momentum. Some of the cars were using more curbing that shows you have more grip. You have something to lean on."

Robert Wickens, the Canadian driver who was born in Etobicoke, managed to meet the tire barrier in turn 8 in the last minute of practice. AR1 asked Wickens what happened. "The alternate timing line that we use for qualifying and practice is so close to the exit of turn 8 there. I just wanted to see how much speed you could take through it. Because if you could carry so much speed to the corner, you might actually find a little something. And I knew it was the last lap before the end of the session. So I figured, Why not."

"Unfortunately, I locked the inside front rights at the end and I ran out of track. I knew it was either going to go well or not go well. I was not expecting to put it in the barriers though."

"The team made a lot of overnight changes to the car and we probably did some decent steps. But we are ultimately still locking that little bit. We are struggling are both cars this weekend with a little something. And we can't seem to find it. We were massively behind Dixon yesterday and now we closed the gap quiet a bit. I am moderately happy with the changes we made to the car."

Good morning from Exhibition Place in Toronto. It was overcast early this morning but the sun is shining now as the IndyCars head out of the paddock for the third and final practice session this morning. The temperatures are expected to reach the upper 80s today with no rain.

The Honda powered cars were in the top five positions on the timing chart yesterday. Scott Dixon, the championship leader, was the fastest in both practice sessions yesterday. Dixon talked to the media after the final practice yesterday. 'I'm actually surprised how quick the cars are, considering that the less amount of downforce, almost 1,400 pounds less, so I think we're faster than the practices last year. For us, the PNC Bank car rolled off fast. It's always nice when you have that opportunity'

'We struggled a little bit to put a lap together on the blacks early on when the tires were good. We made a couple improvements later, so hopefully that transfers today. But I expect tomorrow the competition to be really tight. We put a decent lap together there on the reds, but I think a lot of others will tomorrow, too."

So today's practice will show if the Chevrolet powered teams found anything last night to improve their position.

AJ Foyt, the first IndyCar driver to win four Indy 500s, underwent successful back surgery last week and is on the mend.

“I’ve never felt anything like I did last week," he declared, explaining his latest injury came as he worked at his dumpster business shortly before the race at Road America last month. “I can stand a lot of pain, but it was almost unbearable. I couldn’t touch my legs, let alone lift them up, and it was killing me."

The culprit was the nerves near his spinal cord, and doctors opted to cut a five-inch incision in his back to grind the bones in the spine to relieve the pressure.

“I feel a helluva lot better than I did and I’m not too bad today so I should be able to bounce back pretty quick," the IndyCar told RACER on Friday from his Houston home.

“I’ve got a walker for a few days, but I reckon I’ll be at Pocono next month."

“I walked down the hall the day after my surgery and I think the nurse thought that was pretty good for an old man," he said with a laugh. “I’m not supposed to drive or do much for a while, but that’s what they always tell me."