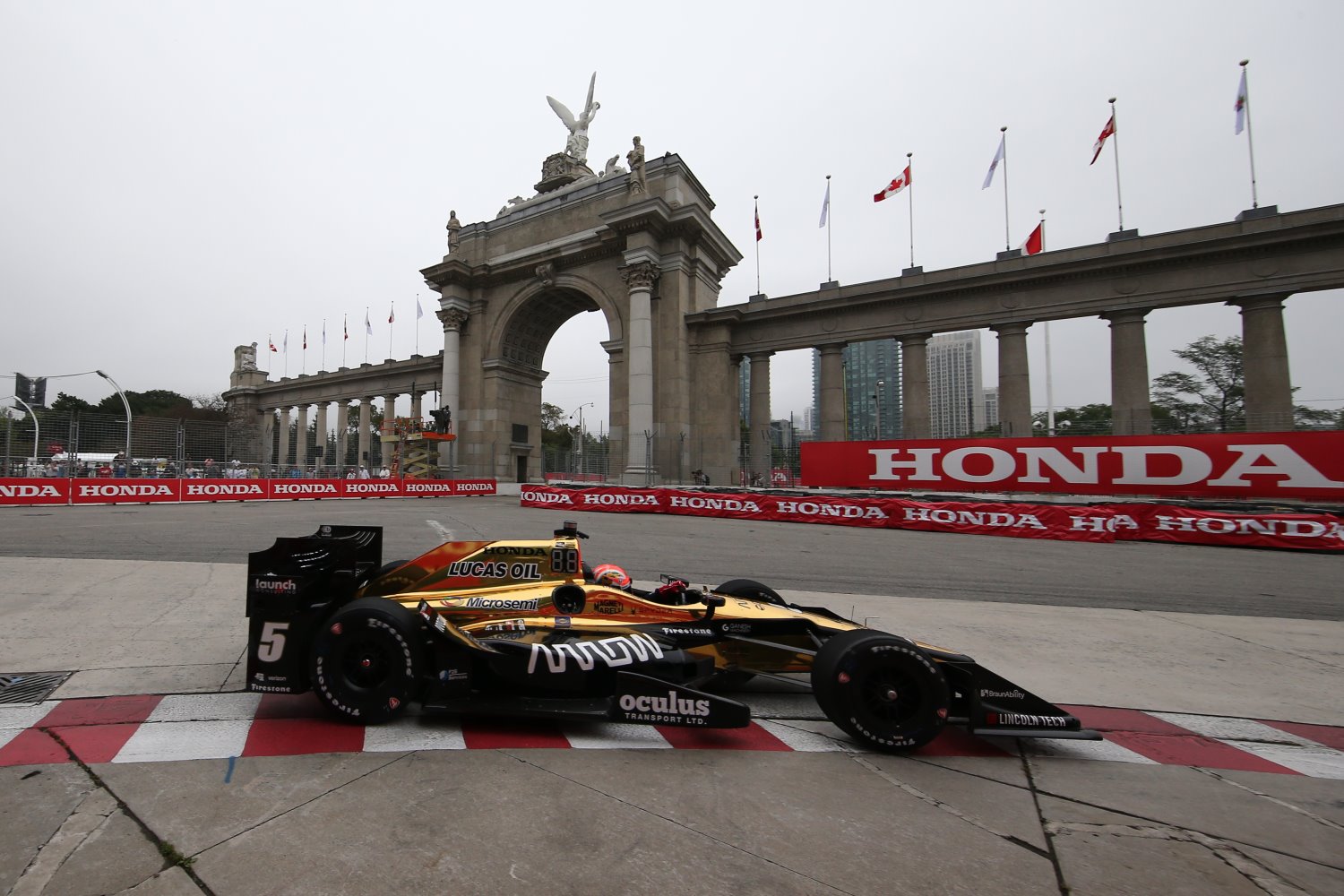 UPDATE After the morning practice, AR1 spoke with Scott Dixon, the points leader who has won this race twice, about the track changes. "The front straight has been repaved. It is a lot smoother. They did a bit of repave here on turn 11. Gradually the track is getting quite smooth, which is nice. The concrete patches make it difficult but that is kinda what a street course is. The transition from very high grip braking, smooth into turn 1 and then going on the concrete is definitely very slippery."

AR1 also spoke with Ed Jones, Dixon's teammate at Ganassi racing, about the track conditions. "A few of the curbs are slightly different. Apparently they did not put the track exactly back where it was being a street course. It is a lot smoother with some of the improvements. The new car is good and challenging on this track. It is surprising the times are much quicker than last year due to the track changes."

The second practice starts at 2:30 pm

07/13/18 Good morning from the only IndyCar race outside the US, the Honda Indy in Toronto, Canada. The sun is shinning and the temperatures are expected to reach the low 80s today. The weather should be warm all weekend. Rain is predicted for tonight but after the racetrack activities today.

Canadians like to cheer for a hometown driver. There are three drivers hailing from Canada in this year’s race. James Hinchcliffe, driver of the number 6 Arrow sponsored car for Schmidt Petersen Racing, is coming off a win at Iowa Speedway this past Sunday. Hinch has been the favorite for this race since Paul Tracy retired from IndyCar Racing.

Robert Wickens, Hinchcliffe’s teammate at Schmidt Petersen Racing and the leader of the rookie points, is a native of Guelph, Ontario. This will be his first hometown race and was involved with pre race media activities yesterday.

Wickens was asked about his take of this event. "I can't express enough how excited I am to race the Lucas Oil car in front of my hometown in Toronto. The team is coming off a great result in Iowa with both cars in the top five and James' (Hinchcliffe) win. It's already been a crazy week here, and the rest of the week is going to be so much fun. I can't wait to get my helmet on and get on with practice because it's a track I've always wanted to drive an Indy car on. It's a bucket list item of mine to race as a professional driver in front of my hometown, so I'm really looking forward to checking that off the list."

Zachary Claman De Melo, driving the number 19 entry for Dale Coyne Racing, is also a rookie this season. The 19 year old is a native of Montreal, Quebec. This will be his first race on the street course at Exhibition Place.

Alex Tagliani is a former IndyCar driver who was born in Lachenaie, Quebec. Tagliani will also be on track driving in the number 18 in the NASCAR Pinty's Series.

Expect security measures when going into the track today. Heightened security was in the downtown and the airport area last night as the police tried to protect against an unconfirmed threat of a possible car ramming by closing roads near highly populated tourist areas. Thankfully nothing happened.