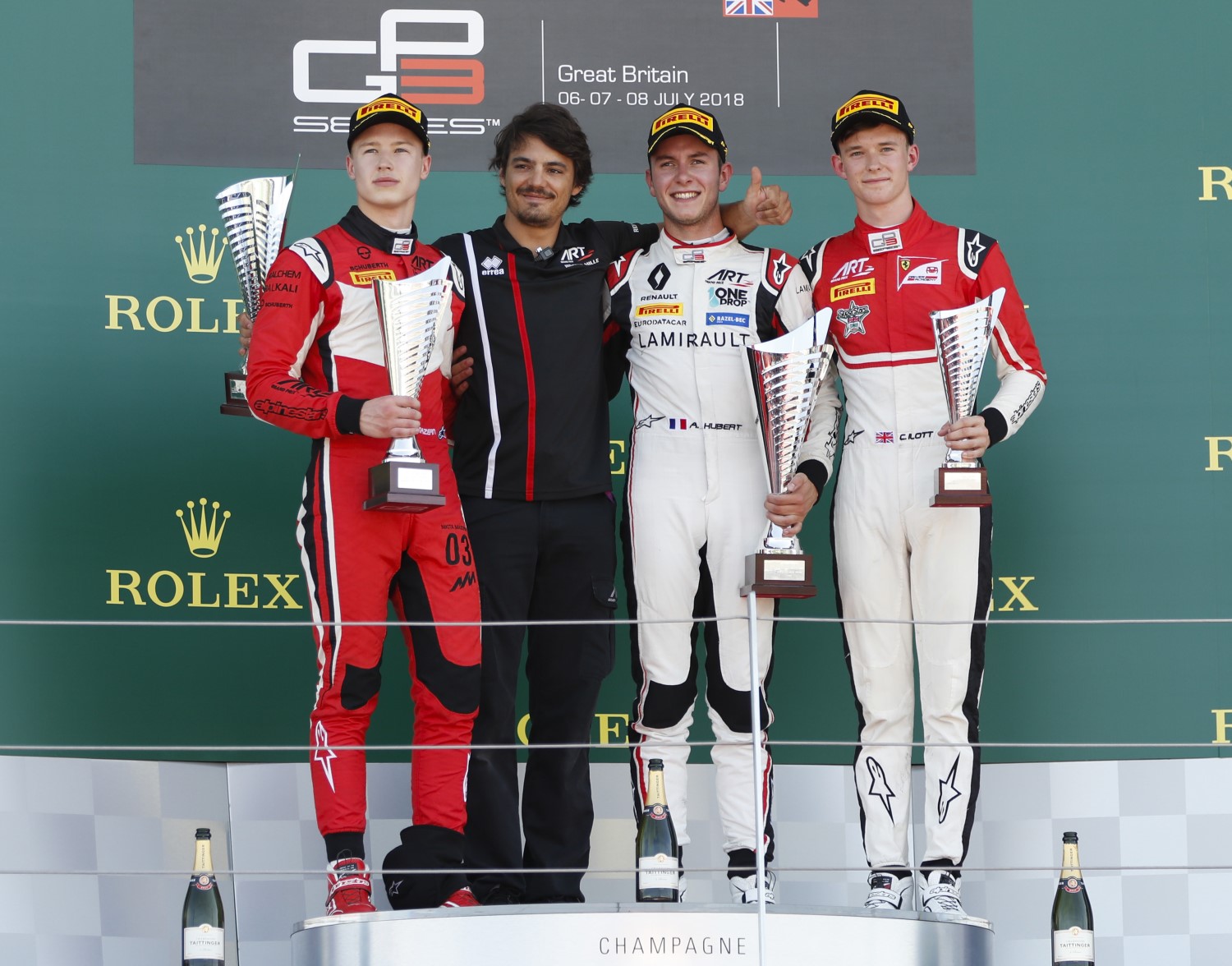 Getting away from the line on the formation lap, Hubert suffered a slight scare having edged away from his grid slot slowly, but was able to reassume his position at the front of the grid. He kept the lead as the lights went out, keeping Mazepin at bay as Ilott thrust past a slow-starting Giuliano Alesi. Immediately, there was plenty of action at the first corner; Alessio Lorandi stalled, leaving the field to bunch up in avoidance. Juan Manuel Correa attempted to pass Julien Falchero around the outside of turn 1, but the Arden driver had nowhere to go and speared into the side of the American driver – leaving the two to retire.

A virtual safety car was brought out as the wreckage was cleared, with the race returning to full-speed running at the turn of lap 4 – Hubert leaving Mazepin in the clutches of Ilott. Shortly after, another VSC period was called after Tatiana Calderon and Gabriel Aubry made contact at Luffield, leaving Aubry’s car stranded with his suspension broken. The brief second VSC period came to an end, before the aftermath of the incident brought out a full safety car – Calderon came to a stop on the circuit just before Stowe, prompting a quick clearance of the Colombian’s car by the marshals.

Dropping the field at the lap 6 restart, Hubert quickly built a gap over Mazepin – setting a new fastest lap and continuing to dictate the pace over the subsequent tours of the circuit. This gave Ilott a chance to attack Mazepin, while their ART teammate Jake Hughes was working hard to wrestle eighth from the grasp of Joey Mawson.

At the halfway point of the race, Mazepin began to claw back some pace and reeled Hubert in to within DRS range, as a battle for fifth place started to flare up – Dorian Boccolacci was under attack from Leonardo Pulcini and, although the MP Motorsport driver’s initial defense into Brooklands was enough to hang on, Pulcini cruised by on the Hangar Straight to collect the position. Behind them, Hughes continued to put Mawson under pressure, but the Australian was resolute in his protection of eighth.

Mawson then endured a stronger assault from Hughes after going wide on the entrance to the Hangar Straight, but managed to hang on – and breathed a brief sigh of relief shortly after as Hughes pulled over at the side of the road at the start of lap 13. This brought the recovering Alesi into play, who quickly began to challenge the Arden driver having managed to clear Finnish duo Simo Laaksonen and Niko Kari.

At the front, Hubert started to flex his muscles, clearing Mazepin’s DRS range once more and finding some extra pace from his tires – with Ilott’s attempts to bring Mazepin into his sights with a fastest lap coming to naught. Meanwhile, Boccolacci was seeking to repass Pulcini having caught back up to the Italian, making an assured pass into Stowe to reclaim fifth on lap 16. This left Pulcini under pressure from Piquet, who attempted a pass on the penultimate lap – but Pulcini’s stern swerve to defend resulted in contact – leaving the Brazilian with a broken front wing.

In the final stages of the race, Hubert continued to exert his dominance over the field, building a strong buffer over Mazepin at a vast rate of knots to collect victory with a 3.9s lead. Ilott was a further 2.5s back, completing an all-ART podium for the second time this season. Ryan Tveter claimed fourth, his best result of the season, as Boccolacci built a three-second gap over Pulcini to seal fifth. Piquet soldiered on with a broken front wing to take seventh, while Alesi passed Mawson in the final stages to finish the race in eighth. Lorandi, recovering from his earlier stall, completed the top ten.