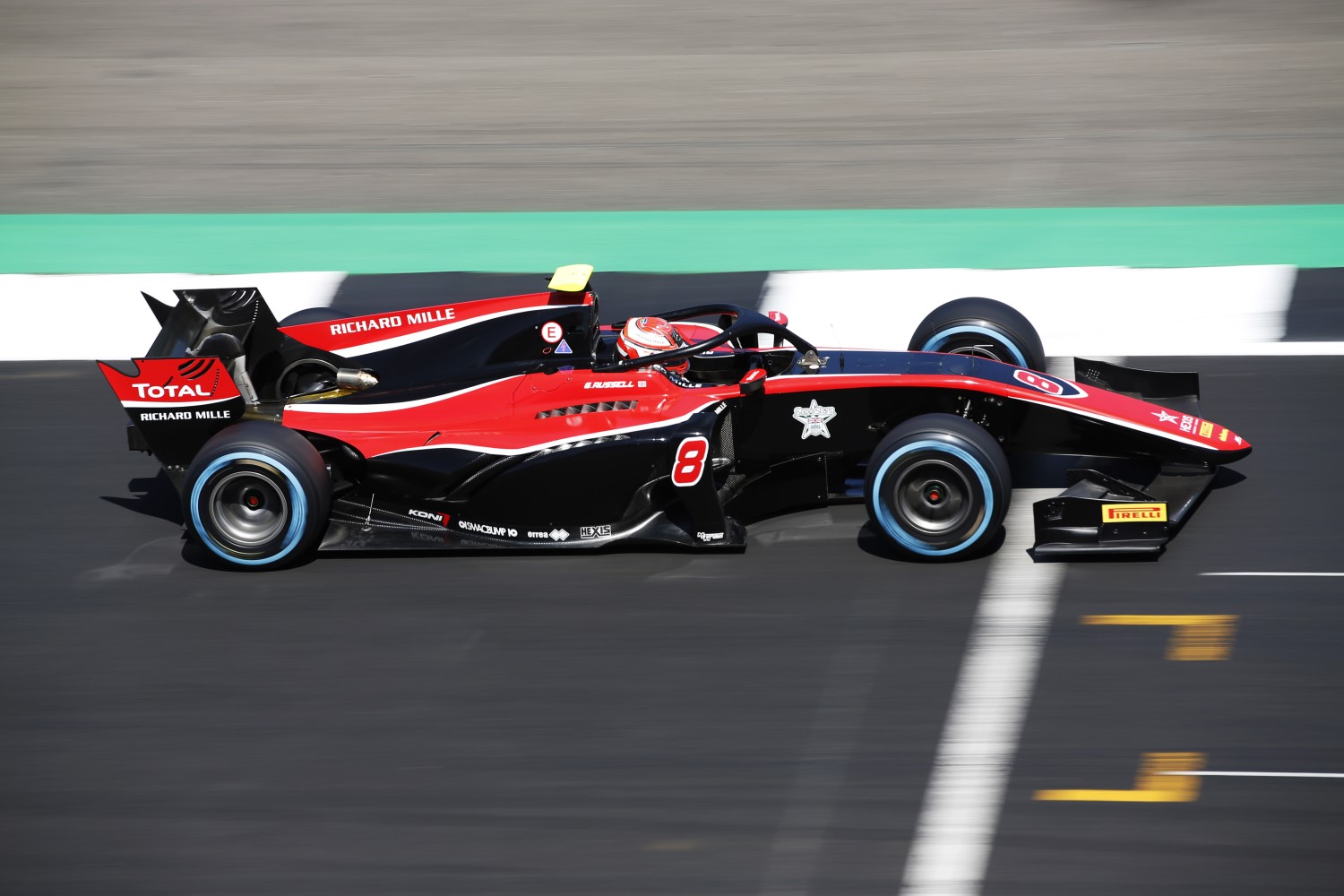 George Russell led the way in the FIA Formula 2 Championship Free Practice session at Silverstone, Great Britain, the ART Grand Prix driver setting a 1:40.410 to clear the rest of the field with a margin of seven tenths of a second. DAMS’ Alexander Albon occupied second place on the timing boards, beating Carlin’s Lando Norris by 0.036 seconds.

The session began under the glare of the midday sun, and Trident pair Santino Ferrucci and Arjun Maini got the session underway. Starting with the first timed lap, Ferrucci immediately brought the pace into the 1m44s, before Maini eclipsed his American teammate by almost a second in the opening exchange of laps. The Tridents were soon given their marching orders from the top two berths by Norris, who got into the 1m42s before fellow Carlin driver Sergio Sette Camara vaulted past his teammate.

Russell then took charge of the session, leaping to the top as Albon posted a wild lap to slot into second. The pace continuing to fall, Luca Ghiotto (Campos Vexatec Racing) found his way into the top two before Norris reassumed top spot – with Sette Camara dropping in to second place – albeit three tenths behind.

Briefly, Roberto Merhi (MP Motorsport) collected the fastest time, before Russell dropped the hammer to set what would prove to be the only lap in the 1m40s – Albon following shortly behind to claim the runner-up position. Moments later, the session was interrupted by a virtual safety car period, brought out for Nicholas Latifi (DAMS) who had spun at the Maggotts/Becketts complex.

Maini resumed the session once the Canadian’s car had been cleared, as attention quickly switched to race pace following the short hiatus in running. Norris improved to third, but was unable to make an impression on Russell’s headline time – and sustained front wing damage after contact with PERTAMINA PREMA Theodore Racing’s Sean Gelael at Club corner.

The session ended under yellow flag conditions, called for Maximilian Gunther’s stranded BWT Arden car – the German lost control on the exit of turn 1, spinning and collecting an advertising hoarding en route to the gravel. This all but crowned Russell’s time as the fastest, with Albon and Norris maintaining their positions.

Ralph Boschung (MP) found his way up to fourth on the timing boards, as Jack Aitken (ART) and Ghiotto occupied fifth and sixth – the British driver a second away from teammate Russell’s pace. Sette Camara took seventh, as Merhi ensured both MP drivers ended the session in the top 10 with eighth. Charouz Racing System pair Louis Deletraz and Antonio Fuoco completed the top half of the field.