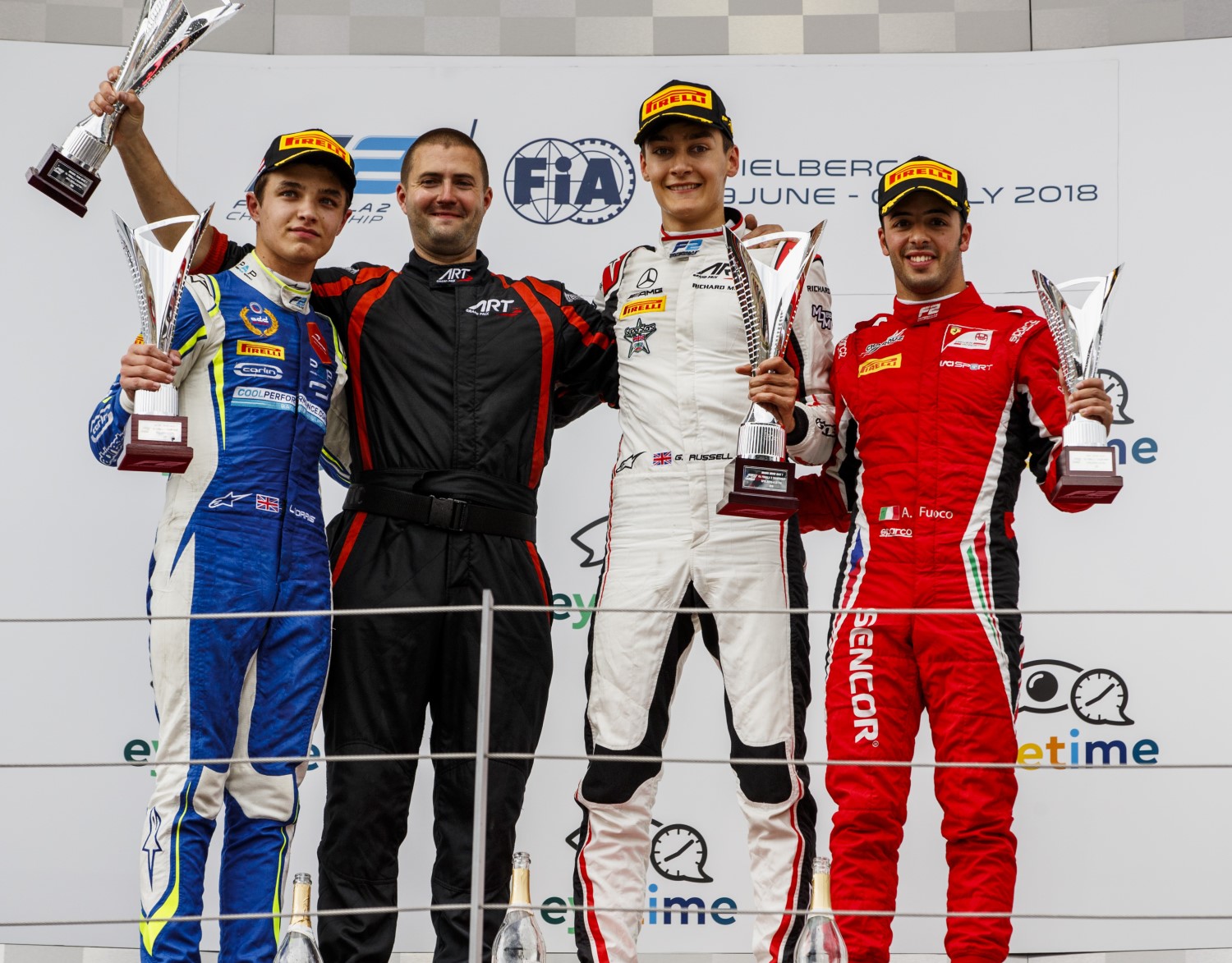 George Russell held his nerve in a scintillating FIA Formula 2 Championship Feature Race at Spielberg, Austria, as the ART Grand Prix driver weathered a dramatic race at the Red Bull Ring with an assured drive to scoop his fourth victory of 2018. Carlin’s Lando Norris took second place to convert from his starting position, as Antonio Fuoco of Charouz Racing System snatched third place on the final lap to complete the podium.

As decided by the FIA the day before, the race opened behind the safety car on the formation lap, before Russell picked up full-speed running as early as possible to open up a gap to Norris. Meanwhile, Maximilian Gunther immediately took advantage of a napping Arjun Maini to quickly secure fifth, leaving the Trident driver in the clutches of the chasing Louis Deletraz.

Norris gave Russell a fright later on in the opening lap, catching right up to his tail before the ART driver managed to hit back – extending his lead beyond the DRS zone to claim some breathing space. Behind the leading pair, Sergio Sette Camara was on his lonesome, while Jack Aitken was under attack from Deletraz, who had expertly dispatched Gunther after overtaking the sluggish Maini – the latter finding some pace to re-take sixth from the German.

As the battles in the lower reaches of the points began to intensify, the safety car returned to the track as Ralph Boschung came to a stop on the infield section of the circuit following an engine failure. This prompted everyone to pit, save from Maini, Artem Markelov and Sean Gelael, who had started the race on the prime soft tires. Maini got the action back underway on lap 9, and quickly started building a lead over second-placed Gelael – while Markelov was under fire from Russell.

The pendulum then swung in the favor of Maini and Markelov, and the Russian driver disposed of Gelael on lap 14 having faced a stern defense from the PREMA racer. Maini responded to a fastest lap from Markelov, setting the pace to keep a consistent buffer. Russell and Norris then started to pick up some speed, catching Gelael and squeezing past the Indonesian before the midpoint of the race.

Behind them, Aitken was resolute in defense and absorbed frequent challenges from Gunther and Deletraz, who took it in turns to attack the British driver – Gunther sending a move down the inside of Aitken on lap 19 at turn 7 to claim sixth. Deletraz was next to try, but an attempted move on Aitken into turn 1 left the pair to take to the run-off, allowing MP Motorsport’s Roberto Merhi to sneak past both drivers – Aitken coming to a stop shortly after to bring out the safety car once more.

Maini’s 5.9s lead over Markelov was wiped out by the safety car, but the pair elected to stay out ahead of Russell. The leading pair bolted once again at the restart, Maini enduring a stronger challenge from Markelov – the RUSSIAN TIME driver found his way past at turn 4 on lap 25, disappearing into the distance. Russell, needing to keep Markelov in his sights, charged past Maini as the Indian began to struggle – locking up ahead of Merhi, who had just cleared Gelael for fourth.

Shortly after, Maini and Gelael pitted to leave Markelov as the sole runner yet to stop, while Russell managed his tires to ensure he assumed the lead after the Renault development driver came in for his mandatory stop on lap 35. Norris, after a period of struggle, picked himself up and worked his way past Merhi to reclaim second place – while Fuoco performed a late surge through the pack to pick off the runners coming to the end of their tire life.

Having successfully braved the storm, Russell brought a close to a hectic race to clinch his second victory in a row – his fourth overall, with Norris successfully building a break over Merhi to clinch the runner-up spot. Merhi was denied a second podium of the season on the final lap, as Fuoco continued his well-timed rise through the field to snatch third place from the Spanish driver’s grasp. Alexander Albon found his way to fifth ahead of Sette Camara and Tadasuke Makino.

Having looked out of contention after his pitstop, Markelov extracted the maximum from his fresh tires to sweep to eighth place, spectacularly dispatching the trio of Gunther, Nicholas Latifi and Santino Ferrucci at turn 3 before snatching reverse-grid pole from the clutches of Nirei Fukuzumi at the final corner. The Japanese driver rescued points for Arden in ninth, while Ferrucci completed the scorers.

With Norris’ championship lead over Russell down to just two points, all eyes will be on the pair as they seek to battle for the advantage in the standings heading into Silverstone. If the Feature Race is anything to go by, Sunday’s Sprint should be a very exciting race indeed.