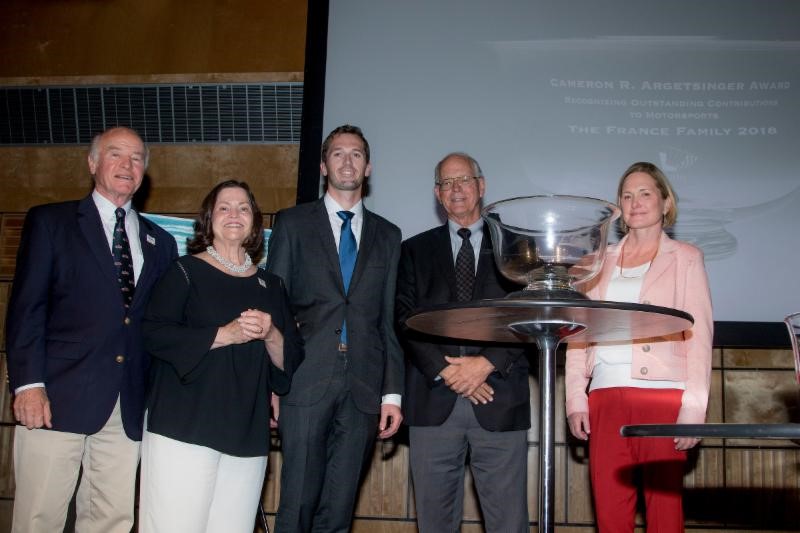 CORNING, N.Y. – International racing stars, captains of the motorsports industry, local dignitaries and race fans gathered on Thursday to honor one of the founding families of American racing at the Corning (N.Y.) Museum of Glass. The family received the Cameron R. Argetsinger Award for Outstanding Contributions to Motorsports.

The event allowed for attendees to intermingle and trade stories about racing.

During one of the more poignant moments at the dinner Jim France said, "I would like to say that for us and our family, it's a special honor to be recognized by the Argetsinger family. They have done for sports-car racing what my father did for stock-car racing."

"It's very special," France went on to say after being presented with the Award by J.C. Argetsinger and Louise Argetsinger Kanaley, two of nine children of the late Cameron and Jean Argetsinger. "It's a family honor and (the IMRRC) is also a very good cause."

Throughout the evening salutes were given in person and by video. Among them were previous Argetsinger recipients Penske and Ganassi, in the audience, as well as Petty and Andretti via video. Those made by racers from all corners of motorsports included Juan Pablo Montoya, Rick Hendrick, Scott Goodyear, Hurley Haywood, Don Emde and David Hobbs.

Speaker after speaker told stories of the intense commitment and passion that the France Family has shown while shepherding the sport for 70 years. Many of the tributes spoke of relationships, both professional and personal, with Bill Sr., Bill Jr., Brian and now Jim France and Lesa France Kennedy, that have shaped many of their early careers, and, more importantly, benefited the fans of the sport.

Ganassi, recipient of the inaugural Argetsinger Award in 2014, told about family dinners with the Frances when he was in his early teens. He said those days inspired him to become the success that he is today. "The word steady comes to mind," he said. "Whether it was Big Bill down to Bill Jr. or to Lesa and Brian and now on to Ben, steady's the word." He continued, "The family has been steady over the years in a custodial capacity of the sport, which, I think, is the best anybody could possibly do in any business that survives for so many years."

Andretti, who was unable to attend in person, provided one of the many video tributes shown throughout the night. "To have built NASCAR into the tremendous success that it is today is no small feat, as we all know." he said. "The France family has grown NASCAR into an exciting fan-friendly, family-friendly sport and always are seeking to improve the product."

Some of the lighter moments of the evening were provided by David Hobbs, racer and TV commentator. Hobbs shared stories of early meetings with Bill Sr. in the late 1950s and early '60s. Hobbs emphasized the strength of the family's commitment and particularly of Jim France's success of the resurgence of sports-car racing in the U.S. "Really, the appeal of IMSA is absolutely extraordinary and that's all down to the France family and obviously under the leadership of Jim."

Michael Printup, WGI President, summed up the way the France Family has achieved unparalleled success. "When I think of the France Family, it's leadership, stewardship, mentorship, creativity, innovative and visionary."

A heartfelt question-and-answer session between the Frances and the event's Master of Ceremonies Dr. Jerry Punch was the highlight of the evening.

When asked about the family's legacy, Lesa France Kennedy summed it up in two pointed sentences. "I think it goes back to my grandparents and just their overall passion for motorsports and family entertainment. I think if we continue to be true to that the future will play out as well."

On display at the reception were three cars and a motorcycle representing unique moments in history: a 1982 Pontiac J2000 NASCAR Modified, Rusty Wallace's 2005 Dodge NEXTEL Cup car, and a 2009 Porsche Cayman. Alongside was a 1972 Yamaha 350cc motorcycle that won the 1972 Daytona 200. Each represented a different racing series that was directly influenced by involvement of Jim France and part of the pinnacle of the sport during its time.

An original painting by famed artist Randy Owens, depicting Bill France's car as it speeds through a turn in the sand portion of the course at Daytona Beach in 1940, was auctioned off at the end of the evening.

The Racing Research Center, located in Watkins Glen, N.Y., is an archival library dedicated to the preservation and sharing of the history of motorsports, all series and all venues, through its collections of books, periodicals, films, photographs, fine art and other materials. The IMRRC is a 501(c)(3) charitable organization.