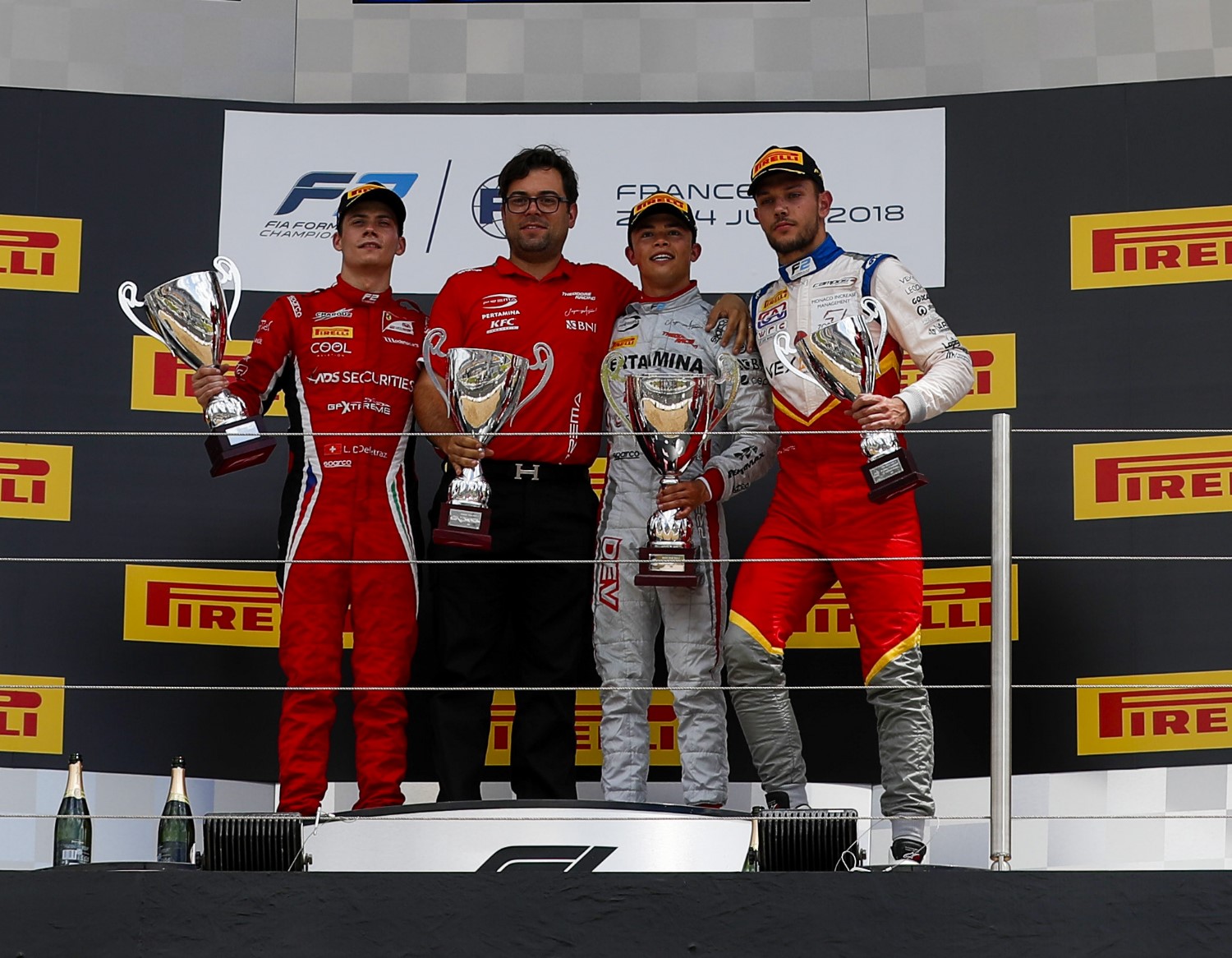 Nyck de Vries was rampant in the FIA Formula 2 Championship Sprint Race at Le Castellet, France, storming to his first championship win of 2018. Making a number of crucial overtakes at the beginning of the race, the PERTAMINA PREMA Theodore Racing driver won by 9.6 seconds over second-placed Louis Deletraz, as Luca Ghiotto collected consecutive third place finishes.

Feature Race winner George Russell was immediately thrust out of contention having encountered technical difficulties, before a flurry of unfortunate events preceded the start – Nirei Fukuzumi was unable to pull away for the formation lap, in which Jack Aitken spun and was unable to get going. At the start, polesitter Tadasuke Makino was immediately swamped by the cars around him, falling to fifth as fellow front-row starter Nicholas Latifi assumed control of the lead, with Deletraz, de Vries and Ghiotto slotting in behind the Canadian driver.

Deletraz immediately displayed a pace advantage over Latifi, winding the lead to within DRS range as de Vries dropped back – giving the Swiss driver free reign to challenge into the Mistral chicane; a lap three attempt to pass served as a reconnaissance mission, with Deletraz taking advantage on the following tour of the circuit to breeze past Latifi for the lead. No sooner had the DAMS driver lost the lead, he had de Vries to contend with as Deletraz scampered up the road from the pair.

On the sixth lap, Latifi lost out once more at the same corner as de Vries made a successful play for second, immediately working on overturning Deletraz’s advantage – which now stood at 2.3s. Behind them, Makino was in danger of hemorrhaging further positions to the chasing Antonio Fuoco and Sergio Sette Camara, before a mechanical problem left the Japanese driver to retreat to the pitlane. The battle quickly returned to three contenders, as Lando Norris cleared Maximilian Gunther and subsequently charged up to the rear of Sette Camara.

At the midpoint of the race, de Vries had unlocked further pace from his PREMA car and started to close in on Deletraz with a clear speed advantage over the Charouz driver. Further down the field, Sette Camara was throwing the kitchen sink at Fuoco, who proved to be uncooperative in the Brazilian’s pursuit of progress through the pack. The action continued around the midway mark, Latifi falling further down the order after Ghiotto wrested control of third.

On lap 13, de Vries was immediately on the back of Deletraz, and the Dutchman forced his way through at turn 5 to seize control of the lead – quickly building a solid buffer to consolidate his position. Sette Camara’s efforts to pass Fuoco were less successful, allowing Norris to enter the frame and peeling his Carlin teammate’s attention away from the back of the Ferrari junior driver.

Norris then made a move on Sette Camara into the Mistral chicane and, although he faced resistance over the following corners, the British driver retained his position and wrested control of sixth. Meanwhile, de Vries was imperious in the lead, opening a heady advantage to Deletraz – who had begun to struggle, losing time to the chasing Ghiotto.

With the battle among the front three stagnating, Latifi’s regression through the field left him to fall victim to Fuoco, with Norris next to get the Force India reserve driver in his sights. Making a pass ahead of turn 1, Latifi attempted to regain the slipstream from Norris to switch back, but instead clipped his rear and locked up heavily with front-wing damage to fall down the order.

Avoiding the various skirmishes behind him, de Vries breezed to victory with almost ten seconds in his pocket over Deletraz, who crossed the line just two-tenths ahead of Ghiotto. Fuoco held on for fourth, with Norris and Sette Camara unable to clear the Charouz driver. Alexander Albon recovered to seventh, with Latifi rounding out the top eight.

Norris continues to lead the Drivers’ Championship with 104 points, his lead slashed to 11 points by George Russell as Nyck de Vries now occupies third overall with 75 points. Carlin continue their lead of the Teams’ Championship with 172 points, while ART Grand Prix occupy second with 140 – with DAMS sitting third with 105 points.

The next round will take place from 30 June – 2 July from Spielberg, Austria, with the verdant hills around the Styrian mountains providing a stunning backdrop for what promises to be another thrilling weekend.