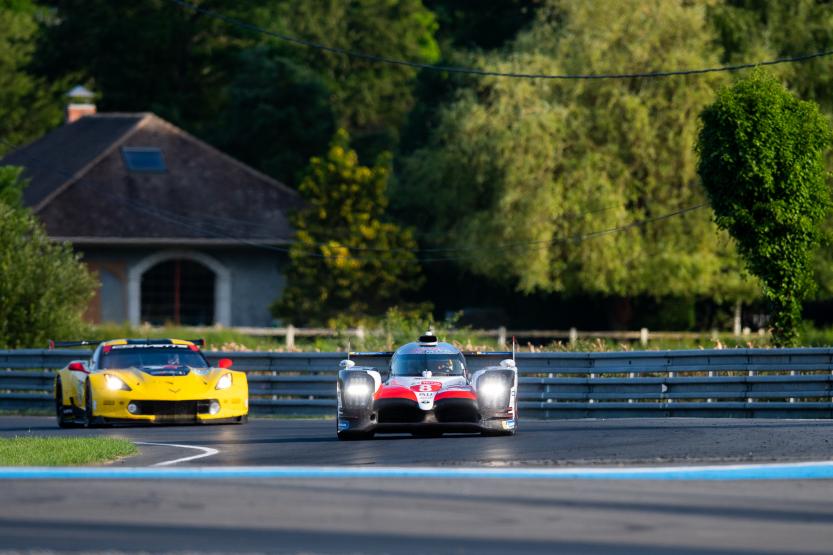 After 21 hours of racing the two Toyota TS050 HYBRIDS are still out in front with Fernando Alonso is still at the wheel and poised to win the 24 Hours of LeMans according to plan.

The two Toyotas are 98 miles ahead of the 3rd and 4th place LMP1 Rebellions. Not taking anything away from Alonso, but when the rules mean you win by over 98 (soon to be 100) miles, something is wrong with the rules, or the fix was in. With Porsche no longer competing Toyota will finally win the 24 Hours of LeMans after failing against real competition so many times.

The two Rebellions have swapped positions again during the previous hour, Gustavo Menezes is now in an outright third place in the #3 car.

The #1 Rebellion-Gibson R-13 with Neel Jani at the wheel is 4th only 4.8 seconds behind and gaining. The Rebellions are putting on a real race, too bad it's 100 miles behind the Toyotas because the rules are so biased.

Porsche continues to dominate LMGTE Pro with the No.92 Porsche GT Team 2m23s ahead of the No.91 911 RSR as the clock went past the 21-hour point. The No.68 Ford GT of Joey was lying in third position, but losing ground to the second placed Porsche and ahead of the sister #67 Ganassi Ford GT car of Andy Priaulx.

Jan Magnussen was a lap down in fifth in the sole remaining Corvette entry, the #63.

G-Drive Racing’s No.26 ORECA 07 Gibson holds the lead in the LMP2 class with Andrea Pizzitola still in the car. The Russian team is over 3 laps ahead of the second placed car in this class, the No.36 Signatech Alpine A470.

The No.77 Dempsey-Proton Racing Porsche 911 RSR is still out in front of the LMGTE Am class, but now only 30 seconds ahead of the No.85 Ferrari 488 GTE of Luca Stolz, whereas it was 2 laps an hour ago.