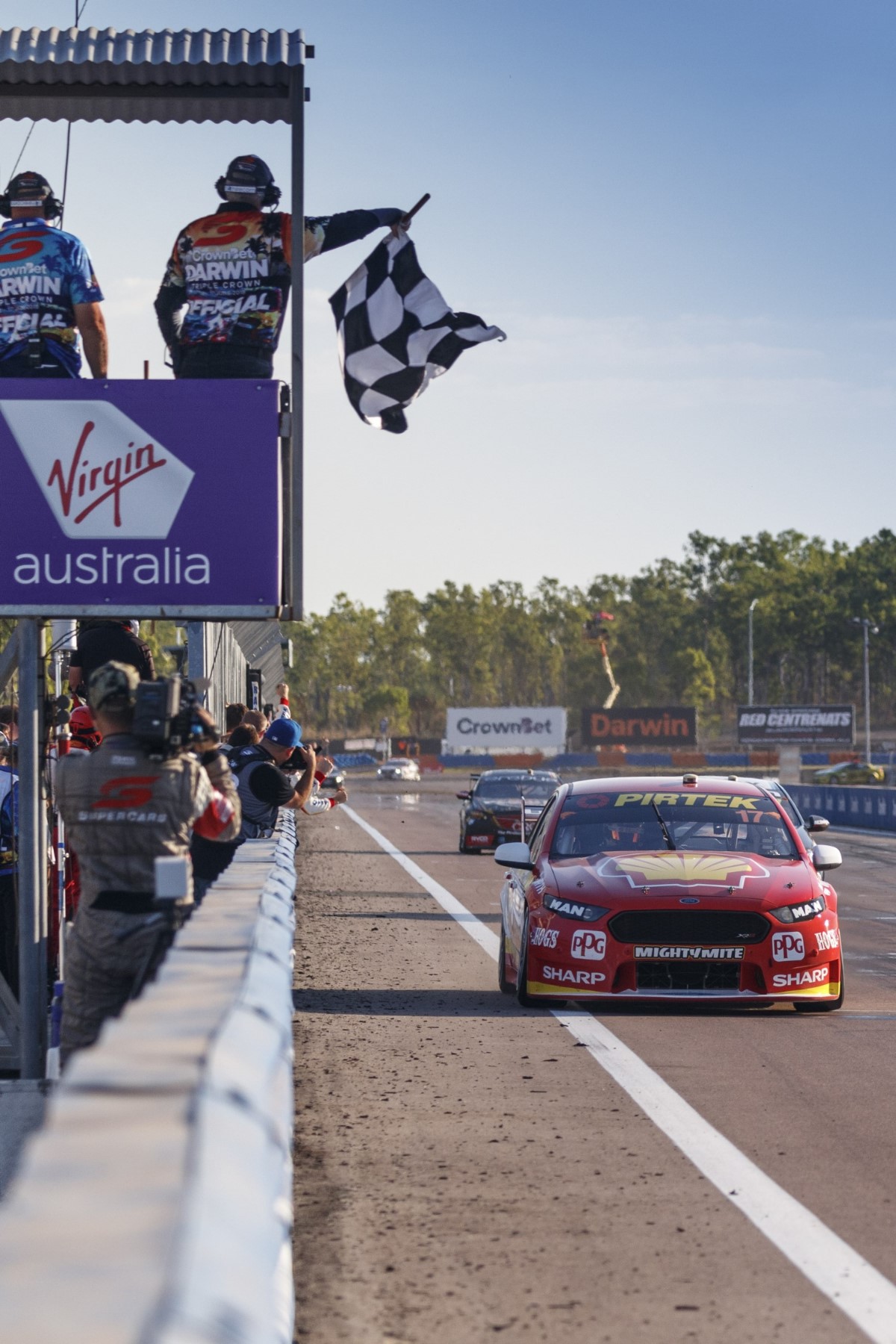 McLaughlin held on desperately to fend a fast-finishing Van Gisbergen, who had the benefit of newer race rubber courtesy a later stop, for his sixth win of the season. ARMOR ALL Pole Sitter David Reynolds, who used the same late stop strategy as Van Gisbergen, landed third.

The two Kiwis put on a classic Darwin finish in a fight to the flag with McLaughlin under enormous pressure in the closing stages, admitting his concern at Van Gisbergen’s closing speed.

“We all know Shane is a hard charger and I respect him like no other. It certainly was great for me to hold him off and for the team. I really wanted that win badly," McLaughlin said.

“The other (Van Gisbergen) strategy was clearly faster but they (the team) had the belief in me to bring it home and thankfully I did."

Van Gisbergen lamented qualifying fifth for the race given his finishing speed.

“It was a really cool race, I just wish we had have started further up the front," he said. “Scotty was driving awesome, good lines at the end and I just couldn’t get through.

“Hopefully we can qualify and race from the front tomorrow."

Reynolds took charge early with a drag race to the first corner from the straight to hold off McLaughlin who took his pit stop first early. Behind McLaughlin, Rick Kelly was pushing hard and in their stops almost came out in front of the young Kiwi.

McLaughlin took the effective race lead in the pits when Reynolds’ stayed out and began to slowly grow the gap. Once the pit cycle ran its course McLaughlin became the outright leader.

The race behind McLaughlin came alive halfway through when Van Gisbergen and Reynolds took their stops, both having run long. A five-way fight between Van Gisbergen, Reynolds, Kelly, Jamie Whincup and Craig Lowndes across multiple corners was the moment of the race.

The winner was Van Gisbergen when Kelly pushed Whincup wide, allowing the Kiwi to slip through into second. On the end of the lap Van Gisbergen, on fresh tires, nabbed Kelly and one lap later Reynolds did the same for third.

“I was hoping I would get a nice passage through the team-mates but they were in their own battle," said Van Gisbergen. “Rick was defensive but I passed him. It was all on for those guys."

As he did in 2011 with Stone Brothers Racing, Van Gisbergen’s fresh tire strategy meant he exploded in the back half of the race.

Earlier Reynolds had snatched ARMOR ALL Pole Position from McLaughlin with a scorching single lap which blew the field away. It took just one lap of the 15-minute session for Reynolds to lay down the quickest time, with the Erebus Penrite Racing pilot completing only two laps in the session.

He now has four of his eight career pole positions in Darwin, equal second on the all-time list.

MCLAUGHLIN QUOTE: “I’m glad I didn’t have a heart rate monitor on – I would have blown the thing off the scale! Thanks to everyone at Shell V-Power Racing Team, they put a lot of faith in me to bring it home today, and thankfully I did. I wanted that win really bad to repay all the hard work the boys have been doing behind the scenes, and for it to be the 100th win for the team makes it a really great day."