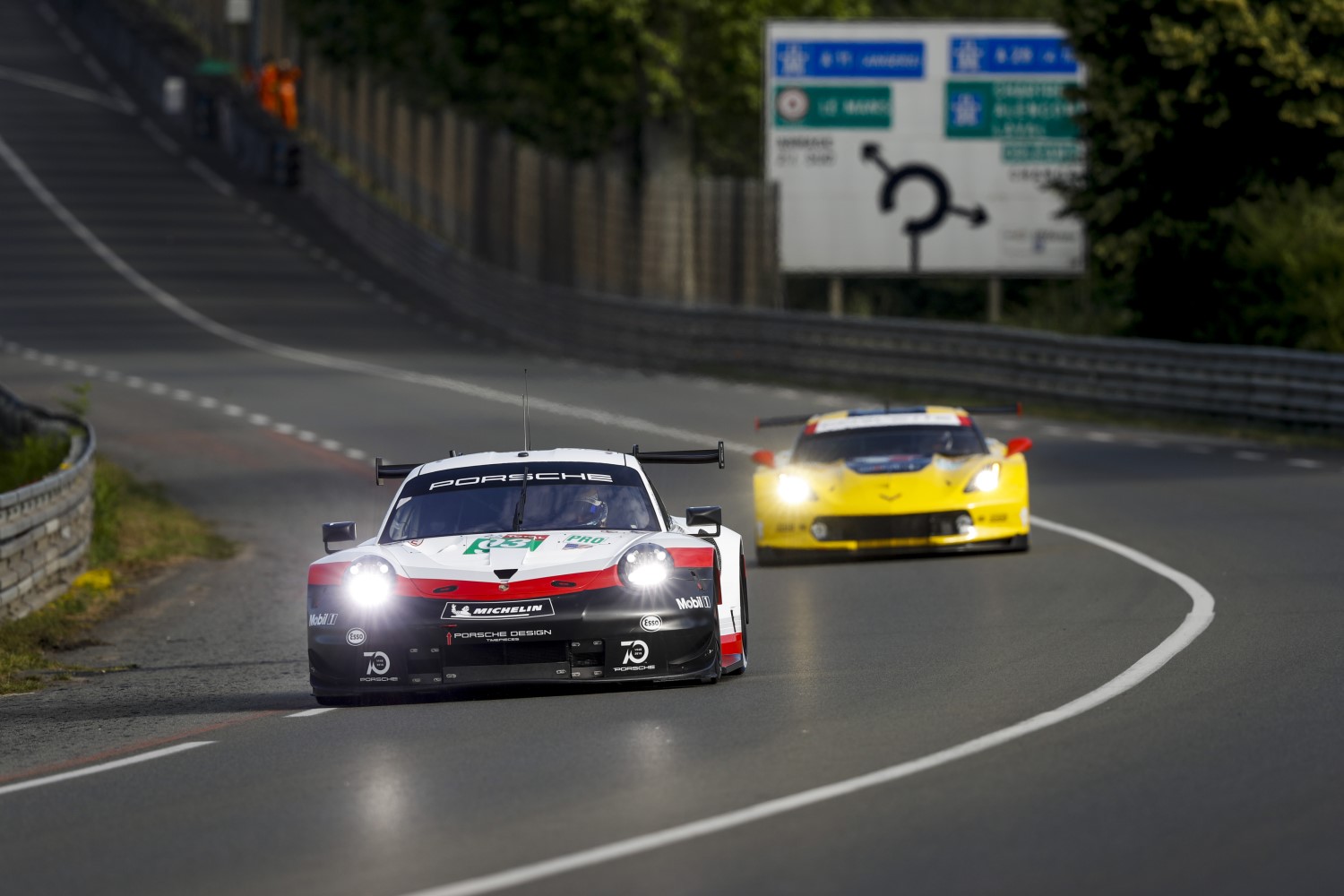 Hot on the heels of Saturday’s Chevrolet Sports Car Classic in Detroit, several IMSA WeatherTech SportsCar Championship teams and drivers were in Le Mans on Sunday to participate in the annual test day in preparation for the 2018 24 Hours of Le Mans on June 16-17.

There were 13 drivers in the Detroit field who also are competing at Le Mans this year, making up exactly half of the 26 full-time IMSA drivers in this year’s twice-around-the-clock French endurance classic. The other half already were in Le Mans and primarily compete in the WeatherTech Championship GT Le Mans (GTLM) class.

And among the GTLM competitors, one of two entries from the United States-based Porsche GT Team was quickest of the 15 GTE Pro class entries during the test day. French racer Patrick Pilet – the 2015 WeatherTech Championship GTLM champion – did the honors for the No. 93 Porsche 911 RSR team, turning in a best lap of 3 minutes, 52.551 seconds around the 8.467-mile Circuit de la Sarthe.

“But over the course of the day, it was very good. We tested at full power. The car’s balance was really great. Due to this, I could finally score the fastest lap time."

Also posting a top-five speed in GTE Pro was Dirk Mueller in the No. 68 Ford GT at 3:53.064. Mueller and his regular co-driver, Joey Hand, are going for their second 24 Hours of Le Mans victory in three years after winning in 2016. The Ford Chip Ganassi Racing teammates will be joined for the race – as they were in 2016 – by Le Mans native Sebastien Bourdais, who competed in Sunday’s IndyCar race at Detroit and therefore was not at the test.

Another group of IMSA regulars were represented in the top five in the GTE Am class. Patrick Long, who co-drove to an 11th-place result in the GT Daytona (GTD) class at Detroit alongside co-driver Christina Nielsen in the No. 58 Wright Motorsports Porsche 911 GT3 R, was fifth-quickest in GTE Am in Sunday’s test.

Nielsen, meanwhile, also was in Le Mans on Sunday to drive the No. 80 Ebimotors Porsche 911 RSR that she is sharing with Fabio Babini and Erik Maris. Unfortunately, the two-time defending GTD champion had a tough day.

“My racing heart is bleeding a little bit after this weekend," Nielsen shared on her Instagram feed. “My teammates jumped in the car in the morning, and around midday when I was supposed to get in, we found an issue that took most of the day to repair.

“Everyone did a great job getting the car back out in time for the final 20 minutes of the day. Unfortunately, I had a rear tire explode on my out lap when I was in sixth gear approaching (the) Arnage (turn). I will be going into Le Mans next week without having a single lap during the test day."

Cooper MacNeil and Jeff Segal were fresh off of a top-five finish in the IMSA WeatherTech Championship race in Detroit and jumped right into the No. 84 JMW/WeatherTech Ferrari 488 GTE AM car at Le Mans. The pair, who were joined by Liam Griffin, were able to turn maximum laps on the day without any issues to get their footing for the race in two weeks. The trio turned 68 laps around the 8.4-mile circuit.

"Overall a good day at Le Mans," MacNeil said. "The car showed a lot of pace right from the beginning as did all three drivers. JMW prepped a great car that was ready to go. We were the fourth fastest Ferrari on the day. We made good progress working through some setup changes. We hit on a handling package that works for all three of us. I am looking forward to the race in two weeks."

All other IMSA regulars participating in the test day managed to do so without incident. On-track activity for the 2018 24 Hours of Le Mans begins next Wednesday, June 13. The race will run June 16-17 at the Circuit de la Sarthe. Live coverage of the race in the United States will be on Velocity.