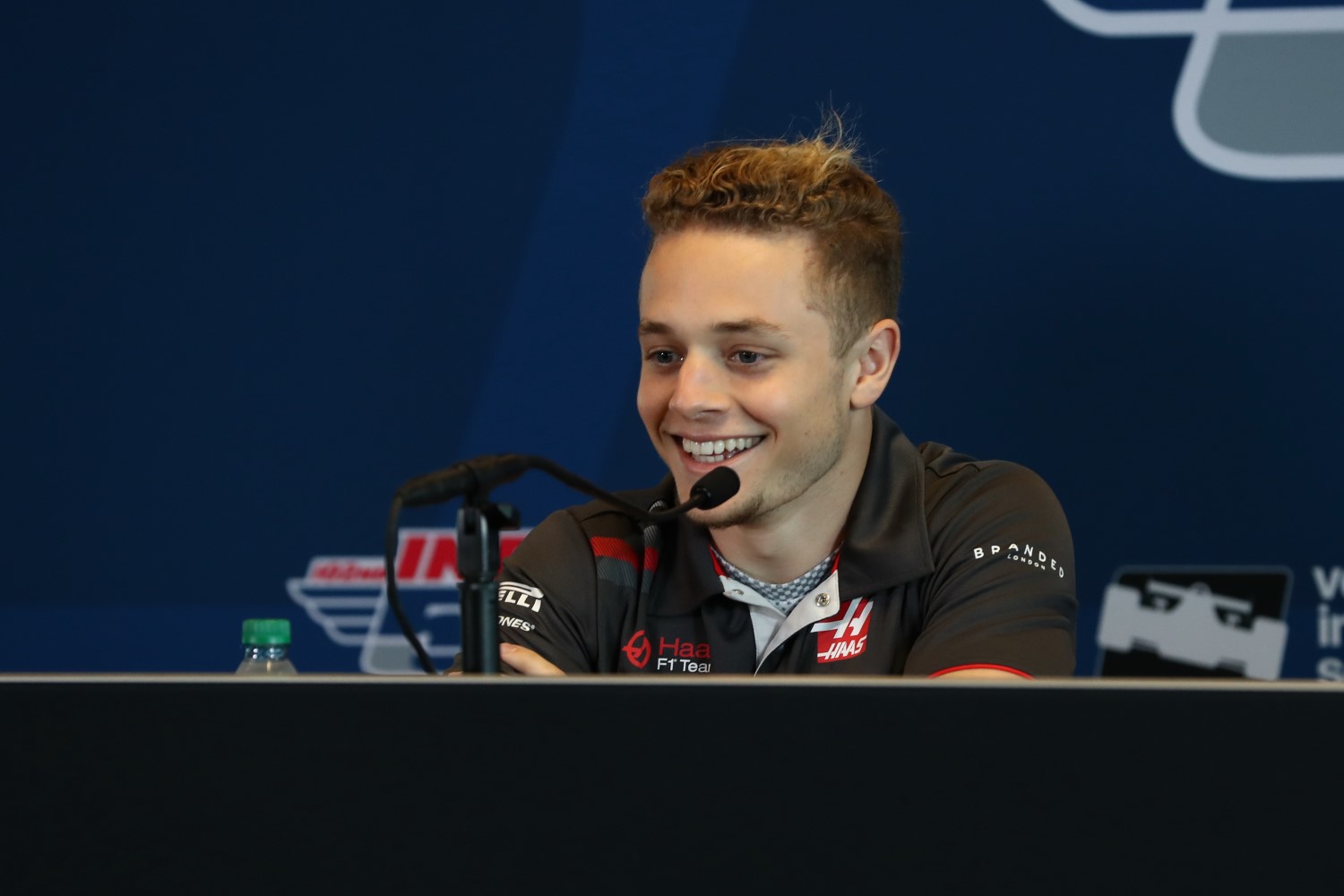 THE MODERATOR: We will go ahead and get started with our Verizon IndyCar Series post practice press conference. Joined now by the driver of the No. 19 Paysafe Honda for Dale Coyne Racing for this weekend at the Chevrolet Detroit Grand Prix presented by Lear, Santino Ferrucci. Santino, most laps logged of any driver in the first session, I'm sure acclimating to the car, getting used to it. And also your last lap was your fastest that put you P6 on the practice charts. So seems like things are going well so far. How are you looking the car and this racetrack?

SANTINO FERRUCCI: Yeah, I mean, I was actually just laying down, so this track is really bumpy, and it a little bit caught me off guard. But no, the car is fantastic. Honestly, I really like this track just for my first take. It's really fun, really fast. Just getting the hang of it. I spoke with my engineer, Mike Cannon, and I told him in Europe we're not used to getting a lot of practice, but if I can run a lot of laps, especially on a street course, it's going to help you. I guess I'm actually a little surprised my fastest lap came in the last lap, as well, but it's just getting better and better as we go on.

THE MODERATOR: The car specifically, how are you working with it, feeling it? What are some of the things that you're having to get used to or adjust?

SANTINO FERRUCCI: Yeah, I mean, the car is actually really different compared to what I'm used to driving with this year being in Formula 2 because we got a new car, as well, similar to IndyCar. But this IndyCar is very similar to something that I drove last year, so the old GP2 car with the V-8 engine. So it's just got that really nice, powerful, nimble feeling for me, but working with Sebastien, he's given me quite an idea of what to expect going into free practice and how to judge myself and how to pace myself.

Q. You have Sebastien Bourdais helping you out, your teammate, and the team, I'm sure. What does this opportunity mean for you and the opportunity to work with a team like Dale Coyne Racing?
SANTINO FERRUCCI: I mean, so I'm happy to be here and I'm so happy Dale had me come out for this race, and to work with Sebastien has been a blast. He's incredibly helpful. He's been in IndyCar for probably about, I don't know, I want to say 16 seasons or something crazy. He's won the championship numerous amounts of times. So to have him kind of almost in my corner helping me, guiding me throughout the weekend, it's amazing. To come out and race IndyCar, especially here, to be back home on home soil, it's nice. It's kind of relaxing in a way.

Q. What did Gene Haas say about you getting an opportunity to drive an IndyCar?
SANTINO FERRUCCI: I didn't speak with Gene too much. Gene owns the team. I spoke with Guenther. He's a bit more of my boss and such, and he said he thought he was a great opportunity and he thought I should take it and get some experience. He said seat time is very, very limited out in Europe, so to come here and have a little bit more of a vast, I want to say, driving skill and to show a little bit more of my potential back here, as well.

Q. Was it a new tire run at the end of the session?
SANTINO FERRUCCI: Yeah, so we had gone out, and then because you're a rookie, you get an extra set of blacks, so we used these tires before the red flag, so we had to run a couple laps on them, we came in, and they cooled down, but when we went back out there, they were still fairly fresh.

Q. You mentioned it's a really bumpy track. Is there anything in Europe, street courses that you can begin to compare it to, or is it a completely new experience?
SANTINO FERRUCCI: To compare this to something in Europe, I would say it's a little bit like Baku in Azerbaijan, just because it's a little wider. Monaco is a little bit of its own one-trick pony being so tight and so fast, but Monaco is actually really, really smooth. So is Baku in Azerbaijan. We don't have any really rough tracks out there. I've only driven on concrete one other time out in Sebring, and I really enjoyed that track, as well, but this is something almost completely new for me.

Q. You mentioned that the car you drove in F2 last year was kind of similar to this, some of the characteristics, but are there things you've got to do differently because it's a different car?
SANTINO FERRUCCI: I mean, entering turns here, it's tricky. I mean, in Europe we have a Pirelli tire, it's a lot different than the Firestone tire. The characteristics are completely different. I mean, we're so used to driving in really hard, stopping the car, rotating, gassing out, so in talking with Sebastien, with the Firestone the best way to do it is to come off the brake and roll as much as you can into the corner. That's something that's completely new to me and a little foreign, so getting hang of that is taking me a little bit of time, but obviously going through the data and working with Seb, he's really accelerated my learning process.

Q. How does the personnel, number of people you deal with in F2 compare to an IndyCar team? How many people, engineers, et cetera?
SANTINO FERRUCCI: In F2 we have three mechanics a car and two engineers a car. Here we have, I think, eight mechanics a car and three engineers a car, so it's a little bit more to take in. A lot of people to say hello to in the morning and stuff like that and to hang out with. To be honest I quite like it. It's also like having your own team. In Europe you share — there's two cars per team. Here there's two cars per team, as well, but it's like you're in your own little team just working with the engineers together. Just a little different. The environment is a lot more relaxed, too. I'm quite — I'm really happy to be here. Everything is really relaxed, and it's a little bit more of a chill weekend than I'm used to, so it's a nice feeling.

THE MODERATOR: Santino, good luck this weekend. Thank you so much for your time.