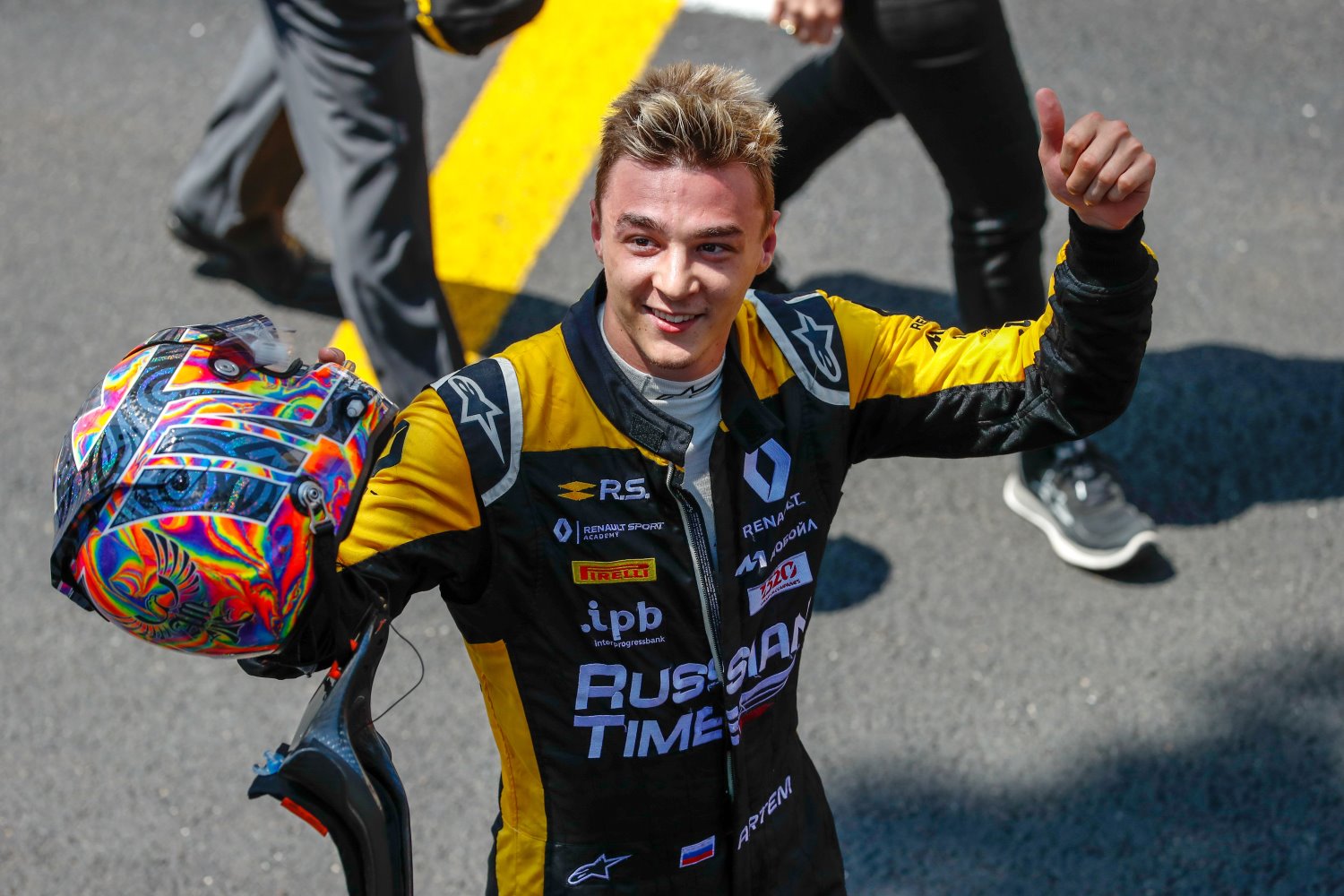 Artem Markelov produced a masterclass performance in the FIA Formula 2 Championship Feature Race at the Circuit de Monaco, as the RUSSIAN TIME driver weathered drama and a pair of safety car periods to secure victory by 10.7 seconds over Sean Gelael. The PREMA driver took advantage of the alternate strategy to take second, as Roberto Merhi did likewise to grab the final podium place available.

Nineteen cars took to the grid after Sergio Sette Camara was ruled unfit to start following his incident in Thursday’s qualifying session. In a hot, humid Monte Carlo, the race was put on ice almost immediately after the start; the safety car was brought out after Luca Ghiotto was helped into the wall by Antonio Fuoco off the line, as polesitter Alexander Albon preserved his lead of the race from Nyck de Vries and Markelov. Once Ghiotto’s stricken Campos Vexatec Racing car was cleared, Albon dictated the restart to remain ahead of de Vries, while Markelov was left to fend off from Arjun Maini after Fuoco was quickly handed a drive-through penalty.

De Vries began to throw the kitchen sink at Albon, before yellow flags flooded the Rascasse hairpin for George Russell, who hit the wall having botched an overtake on Nirei Fukuzumi. With the threat of a safety car – which remained off-track after the ART Grand Prix car was quickly put out of harm’s way – the supersoft runners began to filter into the pits; Lando Norris, Gelael, Louis Deletraz and Merhi peppering the pitlane with stops for soft tires.

Norris then brought out a second safety car on lap 13, attempting an overtake on Ralph Boschung at the Anthony Noghes corner and bundling the Swiss driver into the wall – Norris earning a drive-through as a result. Subsequently, leading pair Albon and de Vries both attempted to pit under the safety car; the two found the pitlane entry too tight for both cars and collided – Albon ending up facing the wrong direction and de Vries sustaining damage.

The end of the safety car period shuffled Markelov to the front of the field, and he began to fire in a series of hot laps to build a gap over Maini. De Vries, the lead runner to have completed their mandatory stop, lost eighth to teammate Gelael before hemorrhaging a further raft of positions – the Dutchman calling it a day after 20 tours of the circuit. This left Gelael as Markelov’s benchmark as he sought to build a gap ahead of his own pitstop.

Dropping the hammer, Markelov had preserved sufficient life in his soft tires to open the gap up to Gelael, eking out as much time as possible to complete his stop. Behind him, Fuoco, Aitken and Fukuzumi all blinked first, pitting while Markelov was setting further hot laps. With his lapped teammate Tadasuke Makino looming larger in his sights, Markelov came in for supersofts at the end of lap 34, crucially emerging ahead of Gelael.

Gelael had soon slashed the deficit to two seconds as Markelov needed time to bring his tires up to temperature, but the Russian soon took advantage of his softer-compound rubber to light the timing boards up with best sectors, opening up his advantage to cross the line with a 10.7s advantage over the Indonesian. Having also pit before the safety car on the alternate strategy, Merhi capped off a well-managed drive to clinch third – he and Gelael claiming their first F2 podium finishes.

Having also benefitted from the option-prime strategy, Louis Deletraz swept home in fourth for his first points of the season, while Maini emerged ahead of Norris after his stop to grab fifth. Jack Aitken was seventh, while Fuoco recovered from his drive-through to eighth. Nicholas Latifi, having stopped the latest of anyone, clinched ninth from the final row of the grid, while Fukuzumi beat BWT Arden teammate Maximilian GÃ¼nther to 10th.

Fuoco will start tomorrow’s Sprint Race from eighth position and, without mandatory pitstops to make, drivers will undoubtedly have to take more risks to progress through the field. With the streets of Monaco keen to punish the slightest mistake, Saturday’s race promises to be just as exciting.