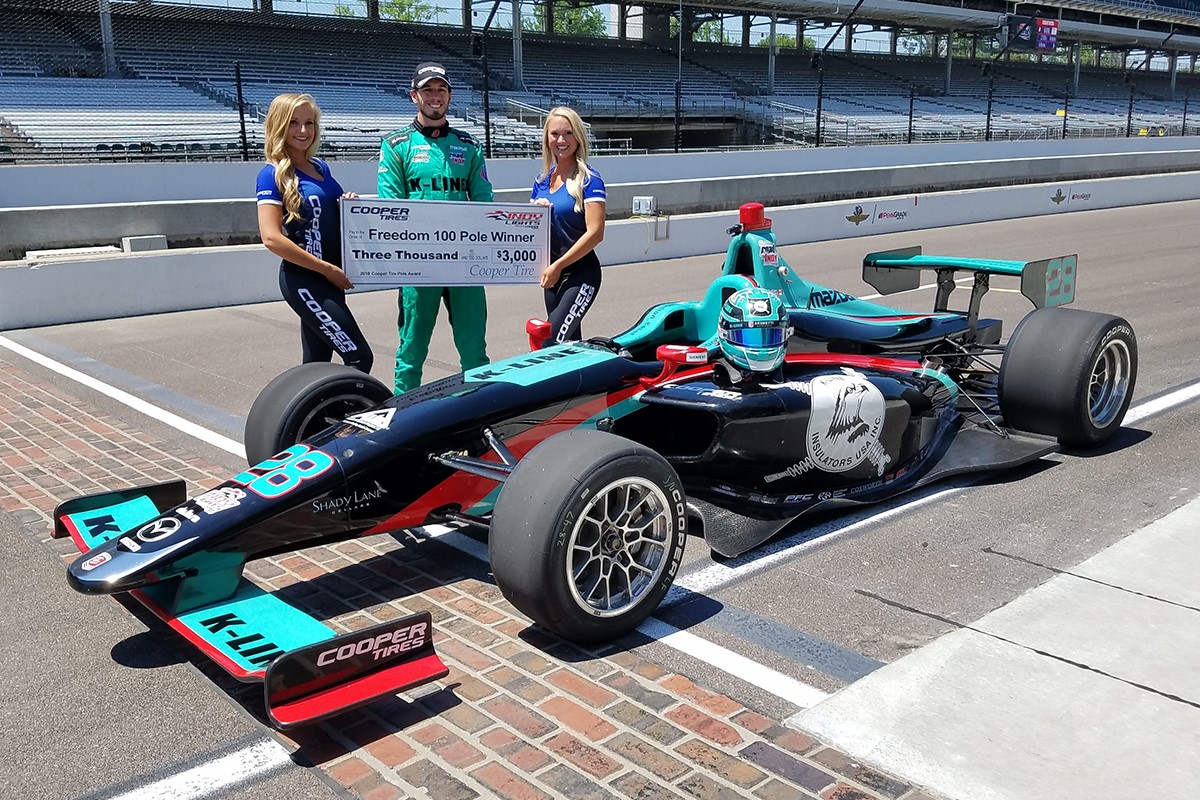 Dalton Kellett has developed quite an affinity for the ovals, and especially the Indianapolis Motor Speedway. After finishing third in each of his two previous starts in the biggest event of the year for Indy Lights Presented by Cooper Tires, the Indianapolis-based Canadian this afternoon secured his first-ever Mazda Road to Indy pole position when he posted the fastest two-lap average of 195.027 mph for Andretti Autosport during qualifying for tomorrow’s Freedom 100.

Kellett, 24, who hails originally from Toronto, Ont., has worked his way steadily up the Mazda Road to Indy Presented by Cooper Tires, starting in 2012 when he entered his first season in the Cooper Tires USF2000 Championship Powered by Mazda. He secured a best-ever finish of second in a Pro Mazda Championship Presented by Cooper Tires event at Iowa Speedway in 2015. Kellett also finished third when the Indy Lights series visited Iowa Speedway last year.

Kellett also posted the fastest speed at 198.005 mph during a rain-affected test day on Monday, and carried that form over into today when, in warm and sunny conditions, he edged out Andretti Autosport teammate Patricio “Pato" O’Ward to the coveted pole position by a scant 0.0601 of a second over two laps of the historic 2.5-mile oval.

O’Ward, 18, from Monterrey, Mexico, will start from the outside of the front row as he bids to defend a slender one-point championship lead over Andretti-Steinbrenner Racing’s Colton Herta, who will start sixth.

Norman will be joined on Row Two of the grid by Brazilian Victor Franzoni, who carries the distinctive Mazda Soul Red colors on his Juncos Racing Dallara by virtue of winning last year’s Pro Mazda championship – the middle step on the unique Mazda Road to Indy, which offers scholarships for young drivers to progress all the way from the grassroots of the sport to the Indianapolis 500.

Uruguayan Santiago “Santi" Urrutia, who has finished second in the Indy Lights championships in each of the past two years – and in 2017 earned the Tilton Hard Charger Award for the Freedom 100 after charging from 12th on the grid to fifth – will start fifth tomorrow for Belardi Auto Racing. He will be joined in Row Three by Herta.

Second-generation racer Davey Hamilton Jr., from Boise, Idaho, will start seventh for Team Pelfrey after posting a two-lap average of 193.302 mph. Even before the session had been completed, Hamilton was seen rushing to the infield, where a helicopter was waiting to whisk him away to Anderson, Ind., where he was due to complete another qualifying session for the Little 500 at Anderson Speedway.

The 16th Annual Freedom 100 will start at 12:30 p.m. EDT tomorrow, with live television coverage provided by NBCSN beginning at 12:10 p.m. Coverage can also be found on a series of platforms including Road to Indy TV, the Road to Indy TV App and dedicated broadcast channels on demand via Apple TV, Amazon Fire and Roku and, most recently, the Xbox One Official App as well as live streaming and live timing on promazda.com and racecontrol.indycar.com. Indy Lights is also featured on the Advance Auto Parts INDYCAR Radio Network broadcasts on Sirius 214, XM 209, IndyCar.com, indycarradio.com and on the INDYCAR Mobile app.