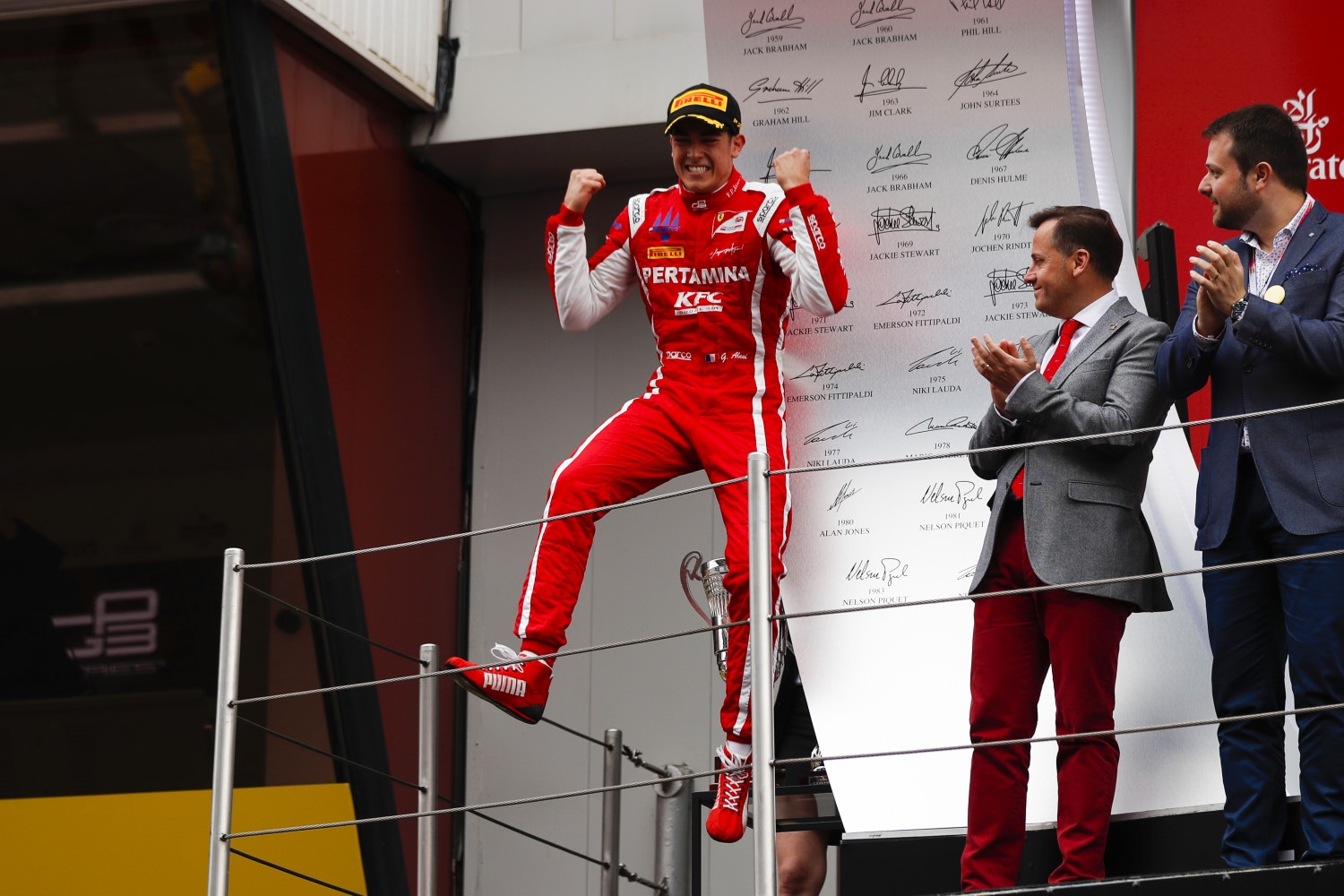 With overnight rain resulting in a damp track, a quick flurry of drizzle before the race cemented the need for the field to bolt on sets of wet tires, with only Will Palmer gambling on a set of slicks. Alesi grabbed the lead from polesitter Juan Manuel Correa, who attempted to squeeze the French driver to the other side of the circuit before conceding defeat, as his Jenzer Motorsport team-mate David Beckmann went off at turn 5 from third after contact with Leonardo Pulcini.

Hubert was next to pick off Correa, passing the American around the outside of turn 12 before going after Alesi, but a third lap crash for Pedro Piquet brought out the first safety car – the Brazilian driver losing control on the exit of turn 9. The race resumed on lap 7, Alesi capably defusing a potential attack from Hubert as he dealt with the restart perfectly, before setting a pair of fastest laps on his next two tours of the Circuit de Barcelona-Catalunya.

Correa then continued to drop back, and lost third place to Hughes before then coming under heavy fire from Callum Ilott, who himself was under pressure from Dorian Boccolacci. Meanwhile, Alesi had built a three second lead over Hubert by lap 10, before their countryman Gabriel Aubry was edged into the gravel while battling with Arden teammate Joey Mawson to welcome a second safety car.

Jenzer used the opportunity to attempt slick-tyre gambles with Beckmann and Tatiana Calderon, despite Palmer’s series of struggles on the compound. Once more, Alesi comfortably dealt with the restart, while Beckmann immediately found himself running wide at Turn 5 at the resumption of the race to foreshadow Calderon’s off-moment a lap later. The Colombian, however, was left stranded in the gravel, adding a third safety car period to the race to shorten the distance by an overall lap.

The safety car came in for a final lap shootout, which Alesi managed to perfection to keep Hubert at bay. Setting the fastest lap, Alesi crossed the line two seconds ahead of his compatriot, who had to deal with a late challenge from Hughes as Correa managed to ward off a rapid Boccolacci for fourth. Niko Kari muscled past Ilott in the latter stages to grab sixth from last on the grid, as Simo Laaksonen took the final point on offer for eighth place.

Hubert leaves the opening round with the lead in the drivers’ standings, sitting on 32 points. Race 1 winner Mazepin has 25 points, with Alesi in third with 23. ART Grand Prix have 84 points to lead the teams’ championship, with a monster lead of 59 points ahead of Trident, as Jenzer are third with 20 points.

The next GP3 round takes place at Le Castellet from the 22-24 June, a new venue for the Series albeit having tested there over the winter.