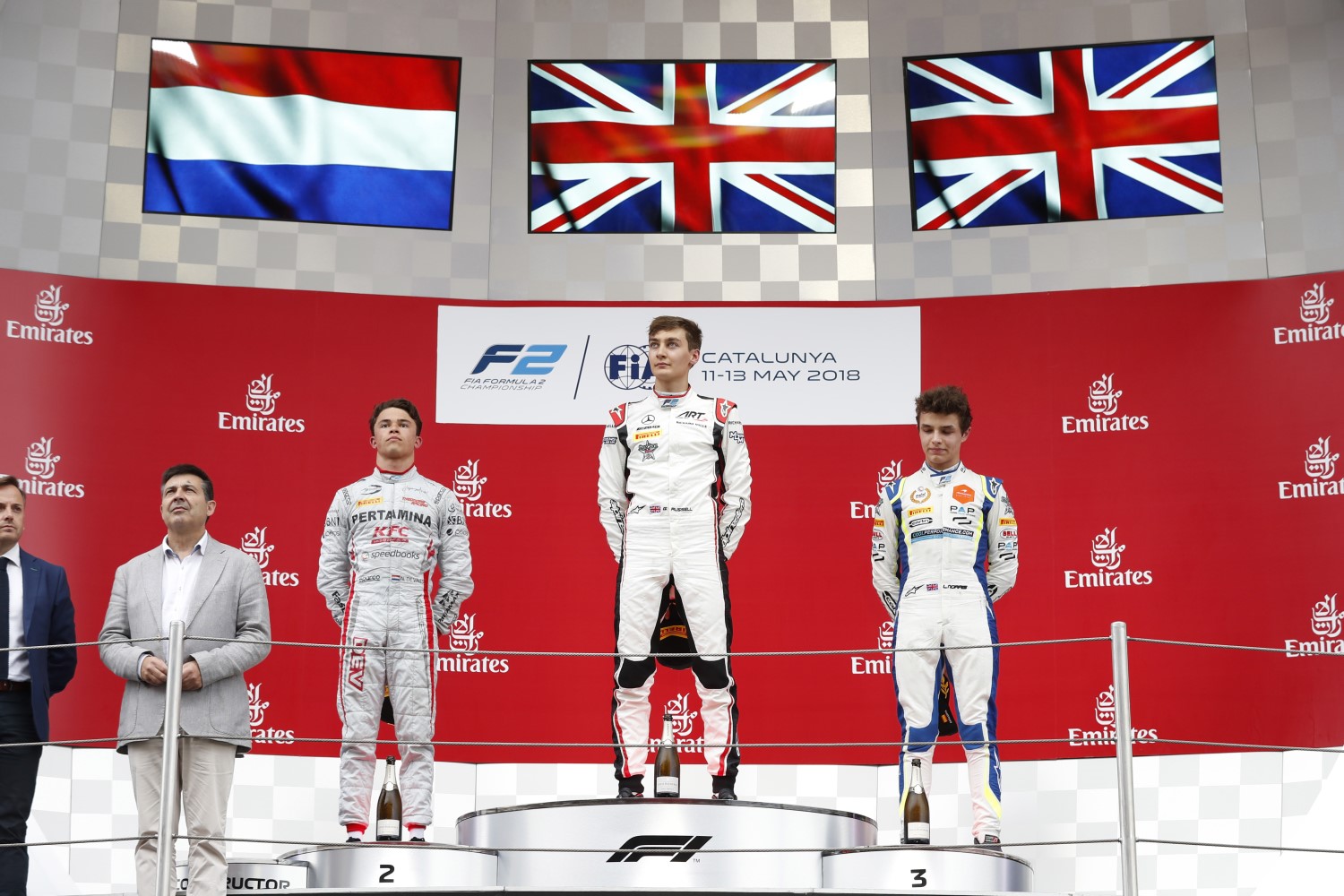 Heavy clouds loomed over the Circuit de Barcelona-Catalunya, with sporadic spots of drizzle peppering the start-finish straight at the start of the race. The rain held off, and a flurry of activity at the race start resulted in de Vries wresting control of the lead after polesitter Alexander Albon endured a slow getaway, which also allowed Russell and Luca Ghiotto to filter through. Immediately, a virtual safety car was called for Maximilian Gunther’s beached BWT Arden machine at turn 2, neutralizing the race before the action resumed on lap 4.

Albon sought redemption for his slow start and overtook Ghiotto a lap later, cruising past on the inside of turn 1 as Norris closed down on the pair. Ahead, de Vries and Russell were battling hard for the lead, with the British driver snatching a tow from the leader before making a move down the inside of the first corner at the opening of the sixth lap – taking the lead.

The virtual safety car emerged again as a tussle between the two MP Motorsport drivers boiled over – Roberto Merhi and Ralph Boschung made contact in their scrap for 12th place, with the Swiss driver ending his day in the tire barrier as Merhi retreated to the pits with damage. The race returned to full-speed action on lap 8 as the race restarted, and de Vries soon found himself under pressure from Albon – who fired his way up into to second place two laps later.

The Thai driver then went in pursuit of Russell, but any charge was halted by a third VSC period after Trident’s Arjun Maini found the wall on the exit of turn 5. The running resumed on the 14th lap, and soon after, the drivers on soft tires were making their mandatory stops as the threat of rain appeared to subside.

All wearing medium sets of tires, the leading trio continued to push on with Albon the first to hit the stages of tire degradation, losing second to de Vries once more as the Dutchman sought to get back on level terms with Russell. With Albon out of the picture shortly after, having pitted to fall behind Norris and Jack Aitken, the front-running pair came into the pitlane nose to tail, Russell maintaining his position by fractions.

De Vries opened lap 27 with an assault on Russell, but the Brit held firm before the PREMA driver’s teammate Sean Gelael had contact with Louis Deletraz on the next lap, bringing out a fourth VSC with Artem Markelov and Nirei Fukuzumi leading – and yet to stop.

The pair pitted at the end of lap 32 once the race was restarted, which went down to the clock as the slower speeds had resulted in a longer race time. De Vries almost collected the lead at the restart, trying a move down the inside of Russell at turn 5, but braked too deeply and conceded the place. With Norris looming larger in the pair’s mirrors, having converted his alternate strategy into a top three berth, Russell refused to be drawn into a battle and edged ahead of de Vries, opening the taps enough to seal his second F2 win.

Despite Norris’ best efforts to snatch second in the final stages, de Vries held on by 0.7s ahead of the Carlin driver. Ghiotto emerged ahead of Albon once more to take fourth place, as Aitken’s alternate strategy helped him to sixth ahead of Sergio Sette Camara. Markelov recovered from a lowly 19th on the grid to take eighth, swiping the reverse-grid pole slot from teammate Tadasuke Makino on the last lap, as Antonio Fuoco completed the top 10.

Markelov also swiped the points available for the fastest lap and, having completed 32 laps on his medium compound tires, will be a formidable opponent from pole in tomorrow’s Sprint Race – which promises to deliver plenty of excitement once more.